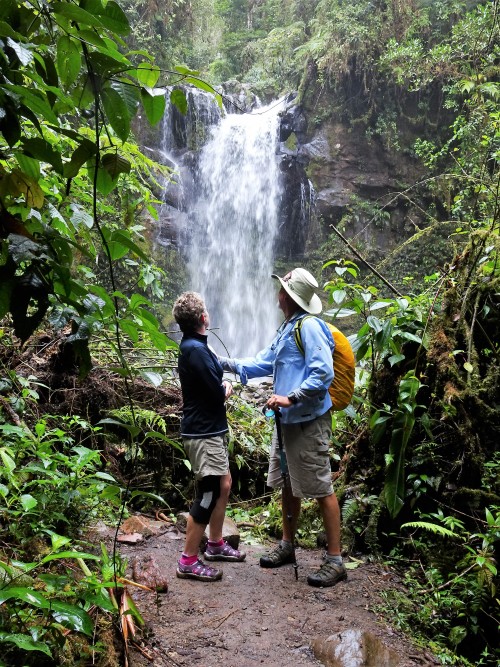 The Red Frog taxi was pretty luxurious and FAST!  Chris, the owner of The Point restaurant had his handheld GPS on board.  He clocked our speed at 47 MPH on our way over to Bocas Town.  Not bad for a non-planing panga.  While we waited for the water taxi to Almirante, it was breakfast crepes at The Crepe Guy.  Oh yeah……he’s a very colorful, stereotypical fifty-something little French dude.  Reminds me of that Chihuahua that’s always admiring your leg (and I say that in the nicest of ways, no disrespect for the Chihuahuas out there).  Our taxi to Almirante was a twin-engine model that they crammed 36 passengers and luggage on.  It was still a rocket ship.  As we idled into the inner harbor at Almirante, I couldn’t help being a Dad.  The young man next to me was trailing his hand in the water.  I gently let him know that all of the bodegas on stilts packed in along the shore were flushing their toilets into the water that we were traversing.  Suzanne had hand sanitizer in her pack….’nuff said.  The four-hour bus ride up to Boquete was a trip.  Our vehicle was pretty luxo.  Air condo and clean.  The scenery?  Spectacular.  The first hour took us along the coastal plain, the last three up and down (mostly up) through rain forest at first, then cloud forest, and finally into Boquete around 17h15.  Besides the nearly-constant mist/rain, our driver didn’t have to worry about any stop signs or even intersections.  There aren’t any.  There’s only one road.  Casa Azul, our bed ‘n breakfast was built in 1915 for an ancestor of the current owner.  It’s a really cute four room house a couple of blocks off the main drag in downtown(?) Boquete.  It’s super clean, AND you have your own bathroom (the deal maker/breaker for me).

Being up in the mountains, the climate in Boquete is decidedly different than down on the coast.  Temperatures are a bit cooler.  We saw 70 degrees in the day, and in the 60’s at night.  Pine trees grow alongside Palms.  It was a nice change to wear long pants and long-sleeved shirts.  The rain showers, ubiquitous along the coast, followed us here.  The vibe is strictly about the Mochilleros (Backpackers).  Hostels abound, and food is inexpensive.  No, I mean cheap.  We went high end one night, eating at Boulder 54.  No reservation, but the Maitre ‘D had just received a cancellation for the table that we would have asked for if given a choice.  Under an open gazebo, and sandwiched between a pond and a fireplace, it was chez cool.  The menu was nouveau cuisine, and the wine list was superb.  We picked out a bottle of Argentinian Malbec (with the help of our waiter/Maitre ‘D) for $24.  “Special on our wines tonight-half price”.  So…….we drank 2, but who’s counting?  Breakfasts at Azul, prepared by Senora Anna.  The rest of our meals were decidedly a bit more low-key affairs.  Lunch of local food at El Saboroson.  After hiking the “Lost Waterfalls” trail (I’ll get to that, be patient), I Googled for someplace close by, as we were kinda tired.  “Mike’s Grill” turned out to be the Expats hangout.  Again, we were “new meat”, and made lots of new fast friends.  (We came back the next night).  Since 2010, when the AARP rag had featured Boquete as a “top place to retire” several years ago, the number of Gringos has increased exponentially.

Whud we do?  Coffee farm tour.  I know, how many of these can you go on?  This one, (The Admiral promises it’ll be our last) was the best.  Panama is not a huge producer of coffee-not on the scale of Brazil and Viet Nam.  But…..they produce some of the finest coffees in the world, as evidenced by their consistent showing in international competitions.  Quality, not quantity is the mantra here.  Let me just say that there are more coffees than you can shake a stick at, running from the robust somewhat bitter roasts that North Americans and Europeans favor, to the aromatic, fruity varieties favored by warm climate countries, to the tea-like beans enjoyed by Far Easterners.  Our guide held up a box, around 20” square and about 7” deep containing Geisha beans that was ready for shipment.  The cost?  Fifty-one thousand dollars.  A cup sells for around $95 in Japanese coffee houses.  At the end of the tour, we had a tasting.  Sampling eight or ten different varieties from traditional to aromatic, I really gained a new appreciation for the beverage.  Yep, we were served Geisha.  I figured that I made around $150 on this tour.

We did the Lost Waterfalls hike in the mist/rain.  It was like a 2-hour version of our 4-day hike in Colombia, complete with slipping and sliding in the mud.  This one even had a stretch so steep that you needed a climbing rope for the up ‘n down.

The best beer in town was sampled at the Boquete Brewing Company.  We couldn’t be here without visiting there.

That’s about it for Boquete.  If we have guests after the Holidays, we’ll probably go back and take a lot more hikes.  The bus ride home yesterday was a lot quicker, as there was no rain.  We’ve been hunkered down today, catching up on bills, laundry, Christmas shopping and blogging while the rain has been intermittently heavy.