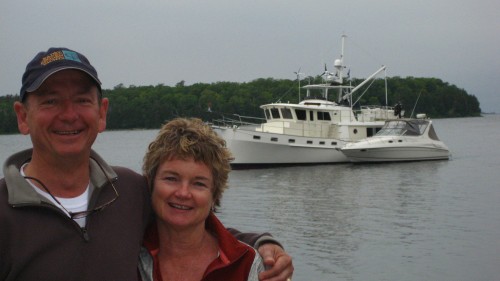 Midwest meets East Coast, Freshwater meets Saltwater. In 1977, Marty & Suzanne meet in the Keys while on Spring break from The University of Michigan, and University of North Carolina, respectively. That is where the adventure began. A wedding and two wonderful kids, Jeremy and Alison, came shortly thereafter. We began our family cruising early in our married life. Starting out in our 19’ runabout, armed with camping equipment and a sense of adventure, we all cruised with our buddy boat, Sure Would, captained by our friends, Andy and Jodie Sherwood. Summer after summer we explored the North Channel of Lake Huron with the kids and good friends, in time transitioning through several larger boats. Winters were spent expanding our knowledge base, first as students, then as instructors with The United States Power Squadron in Lansing. Seamanship was improved by bareboat chartering both motor and sailboats in the Caribbean, Belize, and Mexico. All the while, our focus was on the goal of someday living aboard and cruising full time.

As a marine biology major, Suzanne had an intense interest in things below the water as well as above. Open water SCUBA certification was the logical extension of this interest along with dry suit certification for cold water. Since certification, Suzanne and Marty have enjoyed over 300 dives, from New Guinea to Central America and the Caribbean.

The dawn of the new millennium signaled the next phase of our quest. It was time to decide which boat would be THE boat. Off seasons were consumed with research. Boating publications, periodicals and books on marine architecture littered the couches, coffee tables, and the space under the bed. The travel budget was consumed by trips to the boat shows on the East coast. There are surely many boat salesmen that remember missed dinners because they were talking to that crazy couple from Michigan long after the show was closed for the day. After several years of this, Kadey Krogen trawlers rose to the top. Sea trials and more commiserating finally ended with an order to build our dream home, a Kadey Krogen North Sea, in 2007. The waiting game began. Naming our new boat was easy, as all of our boats have shared the same moniker. Seaman’s lore has it, that a boat name with seven letters and multiple vowels brings “GOOD LUCK.” The name game began. After many permutations, Marty threw out ALIZANN! We went “HUH?” Marty said, “My three girls, Alison, Suzanne and ALIZANN. Jeremy’s ego tilted slightly askew from this choice soon righted itself. “Our tenders name, “White Star “was coined by friends from Great Britain as a tribute to Marty’s grandmother, a Titanic survivor.

We took delivery of Alizann in Baltimore in July of 2008. She spent the winter in the Chesapeake Bay area being commissioned and readied for the trip to her home in the Great Lakes. In May 2009, we brought her home. From May of 2009 through the Fall of 2014, we have cruised Lakes Michigan, Huron and Superior for weeks and months at a time. During this time, we made many improvements to enhance her “liveability”.

We are fortunate to have children, grown up now, who appreciate our lifelong dream and are so supportive of it.

We hope you will continue reading about our adventures and enjoy travelling with us!