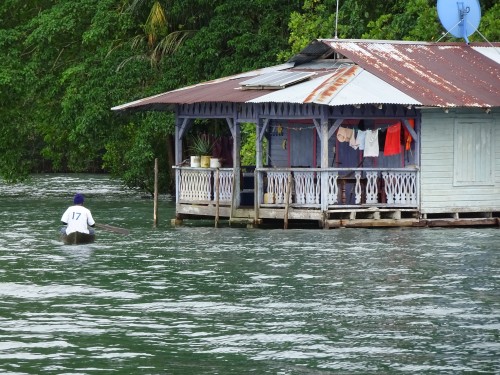 Well.  A couple days morphed into four.  Or was it five?  The weather was rainy, or threatening rainy, so we just stayed put in our cozy little anchorage behind the reef near Marc and Sydney’s restaurant, Rana Azul.  Between raindrops, I was able to get some wax on the Girl.  It’s not one of those jobs that you just “do.”  You just pick up where you left off.  Kinda like painting the Mackinaw Bridge.  When you get to the end, you just start over again.  Not complainin’, just sayin’.  The Admiral and I liked the cabinet lights in the galley so much that the cabinets in the Heads were next.  (Oh yeah-we anticipated this when ordering lights, switches and wire, so they were on hand, ready to go.) 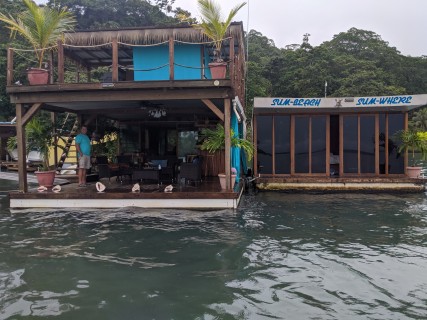 We had some play time with Shellie and Dave too.  One afternoon, we took the dink over to the next bay to check out their floating house.  What started as one has grown into three floating platforms with living spaces built on top and tied together.  Anchored near shore, and connected to it by a floating dock, it’s been their primary residence for the last couple of years.  In addition to building the floating house, they’ve been clearing the 27 acres that they own on land, and building their “Land House” They’ve already sold a couple of lots, and have plans for a swimming pool.  Keep in mind that this land is only accessible by water, power is provided by solar energy and drinking water falls from the sky.  Quite a feat.  Dave’s construction is top notch, and Shellie has really done a great job with her gardening, adding to the fruit trees left behind by “United Fruit” company when they pulled out years ago.  The rain rolled in, and we were forced to sit and drink beer all afternoon-Darn! 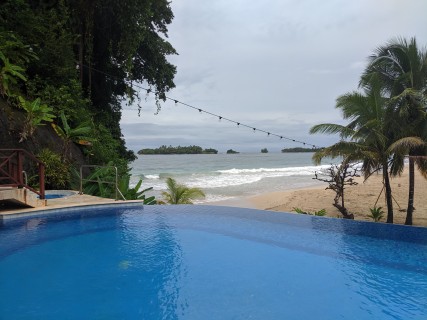 We plan to leave the Girl at Red Frog Marina for a few days when we take a road trip up in December to Boquete, a town up in the mountains.  Shellie decided that we needed to see the marina up close and personal, as well as the development next door of the same name.  Plus…..”They have a great restaurant for lunch, AND a great pool, AND it’ll be empty, AND it’s a private development BUT they never say anything to us when we use the pool, SO bring your suits.  We’ll pick you up.”  Yep.  Gotta love off-season.  We were the only ones at the restaurant, and having sips in the pool was wonderful. 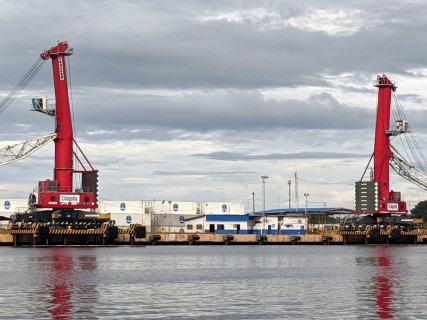 Almirante, the port on the mainland that feeds Bocas Town with twice-a-day ferry service beckoned.  It’s said to be a bit rawer boned than Bocas, so we weren’t sure that it was worth bringing the Girl there.  Also, it’s a commercial port, with Chiquita bananas’ loading dock right in the harbor.  Problem solved.  Dave needed to go in to pick up some building supplies-mortar, grout and etc. for the land house kitchen tiles.  Shellie and he picked Suzanne, Sydney and me up for a field trip to town.  They have a guy there that has a shabby dock for parking their panga, and he sits and guards it for a couple of bucks.  First things first.  It was lunchtime and we were famished.  Of course, D&S knew a place.  The 5 of us piled into a taxi and drove up the mountain to the resort “Bocas Ridge.”  The restaurant there is next to an infinity edge swimming pool, and has a commanding view of nearly the whole Bocas archipelago.  (Starting to see a pattern here?)  The pool was empty, the beer was cold, and we had the place to ourselves.  Back down to town, it was the usual routine-hardware store, multiple grocery stores and a couple of “fruit ladies,” their shops crammed into stalls the size of a small shipping container.  Almirante was indeed a little on the rough side, but the prices for our supplies was much better than Bocas Town. 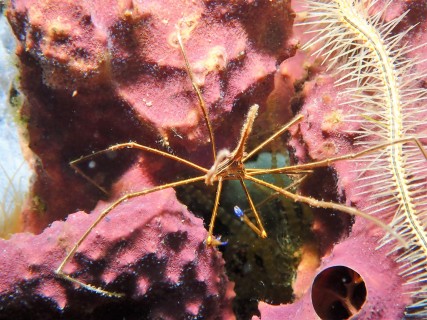 At last!  A day that promised to be at least a bit sunny.  We hauled anchor and took a 45-minute cruise to the (right) snorkel spot this time.  It was only 500 meters or so from the little Mangrove island that we had visited before, but this time we were rewarded with some really nice snorkeling.  There was an absolute abundance of aquatic life with many small fishes (Mangroves’ roots provide shelter from predators and are, therefore nurseries for many species of fish) We were concentrating on invertebrates.  There was a variety of anemones, both in color and type.  Sponges ranged in color from orange to bright yellow, to iridescent green, to purple and red.  Arrow crabs, Pedersen shrimp, Flaming Scallops rounded out the lineup.  The water was so warm and the swim so nice that 2 ½ hours passed in a flash.

One day kinda blurs into the next, so just maybe my report isn’t in the proper sequence, but who’ll know?  (Especially if I don’t).  Anyway, we had some more rain and more was forecast so back we went to Marc and Sydney’s.  We had playmates there, and some connectivity to the world wide web.  One morning, Marc appeared with a boatload of fruit from their property.  Limes, oranges, coconuts, and a bunch of bananas.  I’m not talking a lot of bananas, I’m talking a bunch, as in 30 or 40 still on the stalk.  I’m seeing banana smoothies in our future. 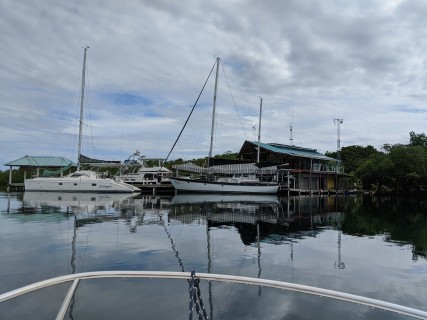 We met Rick and Judy at the birthday party, and she had been in daily contact (What’s App) with Suzanne about us coming to visit them on their island.  We hauled anchor on Friday, the 15th, and were at their island, Tranquilo Place in time for sips with Rick, Judy, Holly and Mike (Picaro).  We got the grand tour the next day.  After cruising here, they bought this little Mangrove island around 7 years ago.  They’ve literally been building their island since.  They’ve raised the level of the island around a foot and a half by bringing in 17,000 bags of dirt, and running a gold panning vacuum to bring in sea bottom.  They still live on one of their two boats (this started as a his and hers operation), but have a multi-story building housing a workshop, canvas shop, their kitchen and second story veranda.  The roof supports around 12,000 watts worth of solar panels.  The roof also acts as a catchment, feeding their collection of water tanks adding up to 3,200 gallons.  Rick is building a second residence, again on stilts over the water to house crews of boats that are being repaired here.  He owned a refrigeration business in his former life, and has a reputation for being able to fix anything.  Judging from what we’ve seen on his island, the reputation seems to be well-deserved.

Judy, Suz and Holly had a Girls trip over to Bocas Town yesterday to attend a craft market and to pick up some supplies.  It’s about a half hour ride in a fast panga from here.  Since this weekend was “Bocas Days” celebrating Bocas independence from somebody, I figured that the island was going to be wild.  I stayed home and polished stainless steel under cloudy skies.  I think that I got the better end of the deal.  Sips on our boat last night, after our company was gone, we laid on deck and watched the Leonid meteor shower under a zillion stars, a little Joni Mitchell in the background.

That’s about it.  Cloudy skies today, so more waxin’ and polishin’ (Still sound like a glamorous life?)  Judy came over today to measure for some sunshades that she’ll make for us (To remedialize the ones that our pal (Grrrrrh!) in Grenada made for us a few years ago).  We’ll head over for Happy Hour, then think about where we’re heading off to tomorrow.