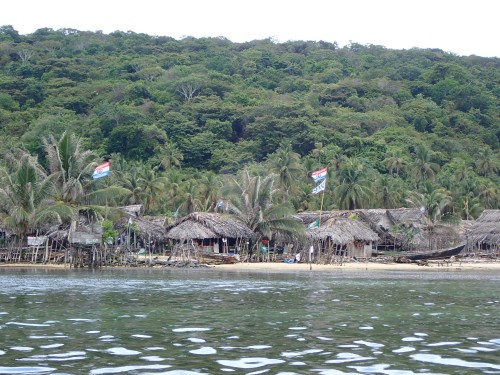 A seventy-five yard swim to shore and the shore line was off.  Suz held Alizann in place while I got back on, then it was anchor up as usual.  We were right on the Colombian border with Panama, so it only took us 45 minutes to motor over to Puerto Obaldia in Panama, where we would clear in.  We had heard that the swell coming into this north-facing bay could be treacherous, but Poseidon was smiling on us today.  Even tho’ we put out a ton of anchor chain, we sat on the pile of chain, never testing our anchor in the non-existent wind and swell.  Obaldia has a very substantial concrete dock for transients’ use.  One problem.  It’s 8’ off the water with no ladders, and a flush concrete surface with no handholds.  As we were puttering around the dock, trying to figure out how to get off the dinghy, a couple of SNF (national defense force) troops came out to see what we were doing.  After some negotiation in sign language and broken Spanish, we ended up mooring to their boat, then climbing across it to another boat, then up to the dock.  They couldn’t have been more helpful to the aging Gringos.  That was the easy part.  Two hours later, our paperwork from Colombia (all in order), had been perused, okayed, and the 87 Panamian Immigration and Customs forms (all in quintuplicate, keeping the carbon paper industry in fine form for their shareholders) had been duly stamped, stapled and filed for future reference.  Oh, did I mention that we were fingerprinted (both hands, including thumb), and photographed for posterity?  The Caribbeans MUST love the sound of stamps hitting documents, and let me tell you, the legs on their desks are doubly stout-I believe to withstand the constant beating.

Done with the formalities, it was time to explore the village, so wonderfully illustrated in the “Cruising Guide to Panama.”  I’m guessin’ that the pictures in the guide were taken a few (or so) years ago.  Obaldia is obviously a shadow of its’ former self.  The streets were bare, there were little signs of commerce, ‘cept the hand-written sign announcing “gasolina viende”.  Okay, we needed gas for the dinghy, so I returned to shore with our 5 gallon can and our hand truck, while Suzanne idled offshore in the dink.  In the back room of a storefront were around a dozen 55-gallon drums of gas, along with, (I’m guessin’, a hundred cases of beer).  Our 5-gallon can was filled by 5 one-gallon bottles.  With the help of another SNF guy, we were off the dock, and back to the Girl.  Under lowering black skies, we got the anchor up and headed west to Isla Pinos.  Lightning all around, we motored through several squalls on our way to Isla Pinos, more or less the entrance to the San Blas archipelago.

We dropped the hook in 2.5 meters of water off Isla Pinos.  We stayed for two days.  A half mile to our left was a traditional Guna Yala village.  A quarter mile to our right was a beach bar, run by Gunas, but powered by a generator, and crankin’ out Soca music.  We were guessin’ that the traditional village tolerated the bar, as it was a source of income, and all income and natural resources are shared by all.  When we ventured to shore, we were superstars.  (White, and not from anywhere around there).  The kids followed us everywhere like the two pied pipers-it didn’t hurt that the Admiral had a bag of hard candy.  Next day, we put the kayaks down to reconnoiter the exit, which looked dicey on the charts, only to find that exiting to the north would not be a problem.  We visited with some kids, and much to their delight, taught them a few phrases in English, which they repeated incessantly as we paddled away.

Our next stop was to be Snug Harbor, About halfway between Isla Pinos and Devil Cays.  We threaded our way through the “Inside Passage”, thanks to Eric Bauhaus’ “Guide to Cruising Panama’s” guidebook.  An officially uncharted area, Eric’s book is the bible for getting through this 100 mile long archipelago.  When just off a lee shore, we had a visit from the Panama military.  True to form, Suz had all of our papers in order, and presented them before being asked.  Although we were boarded, none of the troops came further onboard than our cockpit, as the Commandante was satisfied with our papers.

Our next stop was Snug Harbor, named by pirates, privateers and the British military alike for its safe anchorage.  We (I) decided to enter from the East, as it would save a half hour of time, and it was again threatening rain after a whole day of it.  We were nearly in, in flat skies (no visibility of shallow areas), when we heard that abhorrent sound, the bane of all seamen.  We were aground on a reef.   Shhesh!   Really?  We were hard on, so went above decks to see if we could ascertain where deeper water was.  We certainly weren’t ready to lose our Girl at this point.  The propeller wouldn’t get us off, so we used the bow thruster, timed with the rise and fall of the swell, to rotate us into deeper water.  We got the Girl afloat again, and backtracked our course in to get to deeper water.  We circumnavigated the island to the north, and entered from the west with our skirts up at dead slow (once bitten, twice shy), and motored to the most conservative anchorage.  It was time for (double) sips, and a change of knickers.  Next morning, we launched the dink and reran our reciprocal course. Another 15’ to the port would have gotten us through.  Next morning, amid black/blue clouds all around and 2 ‘’ of clay around the 200’ of anchor chain, we were off to Coco Bandero

Now moving west, we were getting into the most popular cruising grounds of the San Blas.  We were headed to Coco Bandero, one of the most popular anchorages.  We were gratified to see only 4 boats there.  During high season, there can be as many as 50. We sauntered in, the lone. “Stink Boater” amongst the sailboats there.  Dutifully, we anchored down wind of the ragbaggers.  With the kayaks down, we paddled by “Halcyon,” in the afternoon, and invited them for “Sips.”  Turned out to be a good match, and we hope to see Sandy and Britt in the future.

It’s 16h20, and we have not seen our guy, Apio, who has our money and our order for frutas, and legumas, supposedly to be delivered today.  In the meantime, we have scored 3 lobsters, big ones, for 10 bucks.