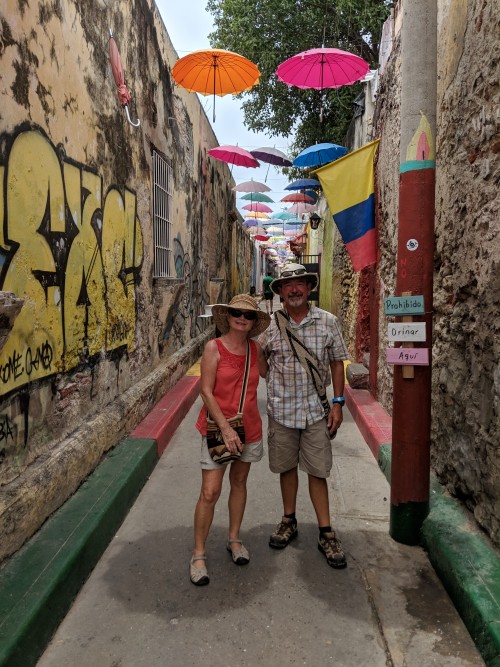 So…we’re luxuriating in bed on Sunday morning, and the air conditioner in our room goes off at 08h00.  Hmmmmh.  No voltage at the panel.  None of the breakers flipped.  No voltage at the pedestal on the dock.  Look over to the fuel dock-the LCD lights for fuel prices are out.  No worries, we close down the Girl-she’s fine on solar and battery power for up to a few days, and head out to breakfast.  Jim and Carole had told us about a favorite breakfast spot of theirs: “Stepping Stones” and it was on our “To Do” for the day. It being Sunday, the bumper-to-bumper stream of traffic headed into Getsemani and the walled city had slowed to a trickle. As we turned off the main drag onto one of the side streets, we realized that there was no power here, either.  There were a few portable generators running on the sidewalks with power cords trailing into buildings.  Other than the sound from these humming engines, the neighborhood was pretty quiet.  Well, we found our restaurant, but as you can imagine it was closed.  We talked to some folks who told us that the power was out in the whole city, and would not be back on until 17h00.  We had planned on a quiet day anyway, so after returning to the Girl for breakfast, we headed back across the bridge to visit the Cathedral and explore the streets and alleys of the Old City.  Apparently, we were among the few that didn’t get the memo about the power outage, as town was pretty deserted.  We did get a few miles in, though, walking the entire top of the old walls.  As promised, the advent of cocktail time brought the restoration of power to the city.  I couldn’t find anything about the days’ outage, but found several articles on the internet about Colombia’s power grid being inadequate to provide power to all areas of the country at all times.  Also, rolling blackouts are not uncommon in Cartagena.

We got our breakfast at “Stepping Stone”, and the food didn’t disappoint.  The restaurant was started by two Australians in 2017.  The mission is to hire kids from disadvantaged backgrounds who otherwise would be unemployable, training them to raise themselves up by working in the food service industry.  You don’t need to change the world, just change the little piece around you.  After breakfast, we hoofed it up to Castillo de San Felipe, the largest Spanish fortification in the New World. There we hired Raphael, who spoke passable English, to guide us on our tour of the fort.  It is really remarkable.  One of the best restorations and biggest that we’ve visited in our travels.

Convento de Popa sits atop the highest point in Cartagena.  We hired a cab first thing in the morning to drive us up.  Besides being unbearably hot, the authorities warn against tourists walking there, as the road goes through some sketchy neighborhoods.  On our way there, we observed a heavy policia presence, but at 08h30, it was still 88 degrees with humidity in the 90’s.  The Augustinians built a small wooden chapel on the site, which was replaced by the much larger convent in 1612 after taking 6-7 years to build.  It is well outside the old walled city, but is a strategic location due to its’ altitude and the fact that it overlooks Fort San Felipe. Therefore, over time fortifications were added to the original structures.  The self-guided tour takes around 30 minutes.  The restoration of the chapel and buildings surrounding the courtyard was well done.  The view from the surrounding balconies is stunning.  …..If it was good the first day, might as well go back the second. When we returned from la Popa, we walked back to “Stepping Stones” for a second go.  We spent the rest of the day just schlepping around town, finishing with dinner at “Da Oliva” near the marina.

Wednesday morning.  It was cloudy.  The weather report forecasted a 70 percent chance of rain.  Cartagena hadn’t seen a drop in over 5 months.  I’m not sure if it was my imagination, but as we made our way through Getsemani and the Old City to the Naval Museum, the sense of anticipation was palpable.  Maybe the rainy season was finally here.

The Museum turned out to be a pleasant surprise.  It garnered mixed reviews on social media, but our experience was very positive.  We hired a guide, Miguel, who spent an hour or so interpreting the various exhibits for us.  We were able to tie together some of our Cartagena history loose ends, discovered that as a U.S. ally, Colombia sent troops to Korea, and learned about Colombia’s modern navy.  The Chocolate Museum provided a sweet rest stop on our stroll through the city.  In the retail shop, we tasted their wares, then stoked the local economy at the cash register before leaving.

Suzanne’s been dying to see a Tree Sloth since we arrived in Colombia to no avail.  The warning signs along the road to Mompox depicting Sloth crossings reminded me of the numerous Moose crossing signs in Newfoundland.  Lotsa signs, no animals.  Well….she heard that there were Sloths in the city park, Parque de Centenario, just outside the wall. We didn’t even know what we were looking for, but soon enough we saw a Sloth and baby in the top of a Tamarind tree.  Pictures were tough through the foliage, but The Admiral’s day was complete.  The locals still holding their collective breaths, it started to drizzle around 17h00 on our way home.  Thunder boomed all around us, but the rain never started in earnest.

Well, the rainy season is here.  It rained most of the day yesterday, and there’s heavy overcast today.  We’re starting to think that we’ve “done” Cartagena, and maybe it’s time to move on.  Suz took inventory of our supplies yesterday and the grocery store is on the short list for today.

That said, I’ll talk at ya’