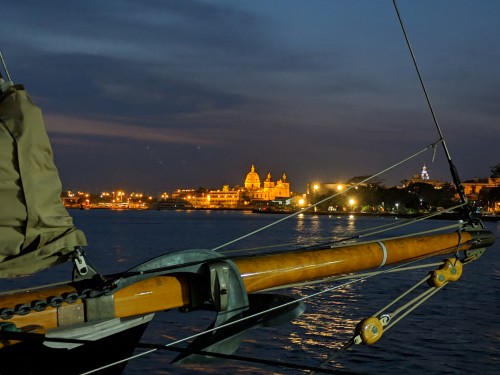 Well…we had a great night’s sleep, but woke up with some pretty sore hiking muscles.  Mike was much the worse for wear.  He too had succumbed to the dread G.I. bad juju.  Carol and Jim arrived by bus at mid-day, as they were helping Mike and Sue sail Skedaddle II to Puerto Velero on Sunday.  Suz and I spent the day getting our poor dirty Girl cleaned up.  We didn’t see Mike all day.  Sue, Jim and Carole joined us for dinner in town, as no one felt like cooking.  Saturday morning, it was Sue’s turn with the plague.  We didn’t see either her or Mike all day, but enjoyed Jim and Carole’s company.  We were thinking how fortunate it was that they were there, as they were fully capable of sailing the boat without M & S.  There was no possibility of delaying their departure, as M & S had plane tickets to fly to Portugal, and then home to Australia in 3 days.  We still maintain that the worst aspect of cruising is when schedules get in the way.  At any rate, Mike semi-surfaced by Sunday morning, and they were off the dock by 06h30.  Suz and I spent the rest of the day getting the Girl ready to move after being at the dock for a month.  She had a nice layer of soft growth on her bottom, and her running gear (propeller, rudder) where our bottom paint is failing needed scraping desperately.  The barnacles were thick, and I spent over an hour scuba diving in the cruddy water.

Puerto Velero is about halfway between Santa Marta and Cartagena, so it was a perfect way for us to split the 16 hour trip. We got the lines out after our 06h15 departure from S.M.. We got 4 fish along the way-3 Barracuda and a 28” Mahi.  All four were thrown back to Poseidon.  Passing Barranquilla, where the Rio Magdalena empties in to the sea, the ocean color went from blue to brown, even though we were 3 miles offshore.  Numerous logs and other flotsam from the river reminded us of dodging lobster pots off the New England coast.  We could only imagine what the conditions would be like during the rainy season when the river was really flowing.  After an hour or so, the water turned back to blue, and we let Otto (pilot) take back the wheel.  Ten miles from Puerto Velero, Mike hailed us on the VHF.  They had picked up our signal on their AIS.  He reported that he and Sue were feeling better, but Jim was now down with the G.I.’s.  Calling the facility at Puerto Velero a marina uses the term in its loosest form. The docks are literally in the middle of nowhere, at the head of a broad bay formed by a treeless peninsula with a mean elevation of around ten feet.  As with many dreams, building progress stopped with the death of the dreamer.  Several condo units and a small multistory hotel are on the site, as well as a very nice swimming pool.  In my opinion, the development never reached the critical mass necessary for it to be economically viable.  There is no restaurant or even a bar, and the nearest town is miles away.  It IS, however, an inexpensive place to leave your boat for an extended period.  We joined the gang on now-recovering Jim and Carole’s boat, Nepenthe for a popcorn dinner.  There was no need for “good-byes,” we will see them all in Panama in the Fall.

Suz and I had our traditional before boating breakfast-“Egg Tuckmuffins.” (We are still supplied with English muffins, as we bought 5 packages in Aruba.) We follow the maxim:  “If you use it and you see it, buy it. You might not see it again.” We were off the dock a few minutes before six, and had an uneventful trip to Cartagena. We didn’t fish, as we still had Tuna and Mahi in the freezer.  There are two entrances to the huge bay in Cartagena, and we really wanted to enter Boca Grande, as it was closest to our destination, Club Pesca Marina. We were a bit nervous about that entrance, though, as our charts are a little sketchy in this area.  Back in the 17th century, the Spaniards built a wall across the mouth of the bay.  Thing is, it’s three feet below the surface of the water (Surprise raiding pirates!).  Our cruising guide said that there was a narrow small boat channel blasted through the wall, but we weren’t seeing any buoys.  We watched as a fairly large sailboat sailed over the wall about a mile or so away from us.  We marked his course on our plotter, and motored over.  There were two buoys, right where we didn’t think that they would be, but we motored through, never seeing less than 11’ of water.

Getting into the marina was a different story.  We hailed on the VHF, and were told to come back tomorrow.  No, not possible.  We have reservations for today, confirmed with Adriana by email yesterday.  So… I will make an hour long story short. May 1rst is a holiday (Labor Day). No one at the marina spoke any English-not even a little.  Our mastery of Spanish extends to ordering food, a beer, and finding the restroom.  (Well, not quite, but close, and talking on the radio is difficult even when both parties speak the same language.)  We could see the marina but it was outside the buoyed channel, and the depth rose precipitously upon leaving the channel.  We were loathe to put the Girl on the ground just motoring over. We were about to scrap the idea and go out to anchor in the harbor when a center console outboard with two guys on it approached us and motioned for us to follow.  They led us into the marina, and we picked a slip.  Meanwhile, the security guard and another guy show up and we get tied up at the dock.  Still isn’t anyone speaking English, but now, face to face, we’re communicating okay.  I give the guys 20,000 peso tip each (approximately $6 USD), feeling quite happy to be here. “Not so fast” says one of the boat guys.  “You owe us 200,000 pesos for our service.” All the time, the security guard (with the gun) is observing the conversation, so I figure that this is the norm. Well…told him we didn’t have that much, and I’d give him 150,000 ($45 US).  Okay, we’re here.  Welcome to Cartagena.