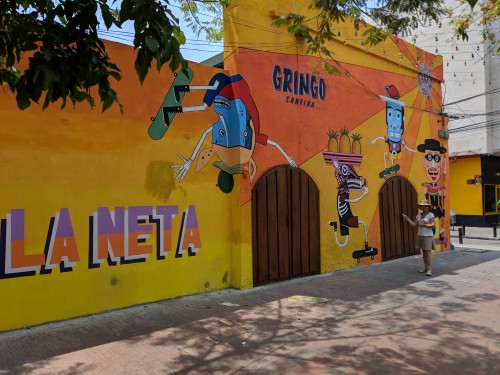 We’ve had a couple of quiet days, just hangin’ on the Girl taking care of the necessaries.  Holly the haircutter invited us to a potluck the other night, and we met half a dozen other cruisers.  Most are on the other dock, so we hadn’t interacted with them yet.  Among a few other pearls of wisdom, we found out that all of them were making water here at the docks, and most of them had been here at least 6 months.  We have never run our watermaker at a dock, for fear of fouling the delicate membranes with any petroleum pollutants which may be in the water.  Long story short, we made water for 7 hours yesterday without any issues.  We still won’t make a habit of it.

Yesterday we rinsed off our trusty little ship and polished some stainless steel.  The dust here is unbelievable.  You can rinse down the decks, come back a day later and still get a wave of brown water streaming out the gutters.  We’ve learned to keep the hatches mostly closed since we were having the same problem inside.  Thank goodness for Vornado fans.  At night, we turn on the airco in our stateroom.

We’re into our second day of “Lose incredible amounts of time to computer crap”.  Yesterday, I cleaned up our main navigation black box.  We still had routes and waypoints from Labrador and Newfoundland clogging up the memory.  That went smoothly, just took some time.  Then we started on the PC based program.  I got stuck.  The Admiral couldn’t help.  Then……I know better, but consulted multiple forums and flogged around for a few hours without result.  Suz says that John on Seamantha uses the same program-he’ll know.  What’s Apped him last night.  Talked to him this morning.  All good.  I just heard a “Woohoo!” from the pilothouse while I’m peckin’ away in the cockpit.  Here’s the deal.  There aren’t any official charts of the area we’ll be visiting next (The San Blas Archipelago in Panama).  The definitive cruising guide for the area has been compiled over the years by Eric Bauhaus.  He has taken over a million soundings and created a whole portfolio of charts which can be found in his book “The Panama Cruising Guide.”  These charts have in turn been magically turned into an electronic format for “Open CPN,” an open-source navigation program created by a group of cruisers.  Suz downloaded these on to our nav PC months ago, but never said “Abracadabra!” so our boat did not appear on the electronic chart.  Well, she did her prestidigitating today, and made it so.  When she called me up to the pilothouse a couple hours ago, it was working waaayyy cool.  When she closed the program and tried to reopen it, it crashed big-time.  She’s been up there for all this time trying to resurrect it.  In the meantime, I’m hogging up the bandwidth downloading 650 other charts to the laptop.  Okay, I’m heading up to see how it’s going.  Hahaha.  She’s got GPS position, AIS targets, and depth working on the Open -CPN and the Bauhaus charts.  And you thought that she was just another pretty face.

Well, we spent another day manually entering the latitude/longitudes for waypoints and anchorages in the San Blas islands.  It was painful, (I think that there were around 140- some odd positions) but will be well worth it over the next year.  It was time for a break, so we decided to take the Girl up to a couple of the bays in Tayrona National Park.  We had passed them on our way here and they looked, and we had heard, that they were pretty cool.  Problem was that you need a cruising permit and permission from the Port Captain here in Santa Marta to anchor there.  Our trusty lady at the desk, Kelly failed us big-time on this one.  She told us that the cruising permit could be had in a day, and that as soon as it was in process, we could head out.  We paid for the cruising permit last Friday, planning on heading out on Monday.  Monday morning, we head to the office for our permit.  Kelly’s on vacation for 2 weeks, but David, the Agent here at the marina will handle it.  Come back this afternoon.  The Port Captain had to check with the bank to make sure our $$$ had been deposited, manana.  Tuesday morning.  He’s working on it.  Come back this afternoon.  Manana.  Wednesday morning.  David’s meeting with the Port Captain.  Come back this afternoon.  No can do.  “Can’t we go, since he has our money, and it’s in process?” No.  We’re resigned to not being able to go, and having a cocktail up on the boat deck, when David appears around 17h30 with a gorgeous document in his hand.  Yay!  Weather’s supposed to be iffy-very windy and high seas.  We’d already decided not to go.  Didn’t tell David that.  So, we are in this conversation with him, and he tells us that he’s so happy that we got the permit ‘cause he worked so hard to get it.  His contract here at the marina is up, and his last day is Sunday.  He’s a full-time business student at Magdalena university, and his last year will require his full time attention.  After he leaves, Suz and I decide that we should probably go-it’ll make David happy.  My concern is that David is also the Agent at the marina, acting as the go-between with Customs and Immigration.  I have a shipment of boat parts coming that I don’t want to pay duty on.  Hopefully the new guy knows the ropes and will get our stuff through the maze.

Thursday, 07h30, and I hail the Port Captain on the VHF.  Yep, we get permission to anchor for 1 night each at 2 bays up in the park (The limit is 1 night).  The wind was brisk when we pulled out of the harbor, but nothing really significant.  As we turn the corner 45 minutes later and start heading East, the breeze is picking up.  Picking our way between a rocky point on the mainland and a small island, the sea becomes a washing machine.  Breakers are crashing over the shallows on our port and starboard.  It looks scary, but the guides that we’ve read say that we can go through.  Well…we never see less than 66’ of depth.  Boy, it was kind of a puker.  27 knots of breeze on the nose with a beam sea.  We could hear the cupboards being rearranged, and took a peek down into the salon.  Oh yeah!  Our recliners had slid across the floor, bunching up the rug in the process, but were now stable in the center of the boat thanks to the bunched-up rug.  An hour-and-a-half later, we turned the corner into Bahia Neguange, more or less out of the wind-driven waves.  Up at the head of the bay, all appeared calm.  Before we dropped the hook, we let the boat settle into the wind, and found that the swell rolling into the bay was right on our beam, making for a bit of a roll.  Nope.  Even with the flopperstoppers out, it’d probably be an uncomfortable stay, and we were looking forward to some peace.  Out of the bay and into the one next over, Bahia Gayraca.  Much better.  The swell wasn’t funneling in to this one nearly as much and we had a nice breeze.  We dropped the hook in 22’ of water around 150 yards off the beach and put out 150’ of chain, just in case.  We got the cupboards and inside of the boat tidied up, then took to scrubbing the layer Santa Marta dust off the outside while enjoying the sunny afternoon.