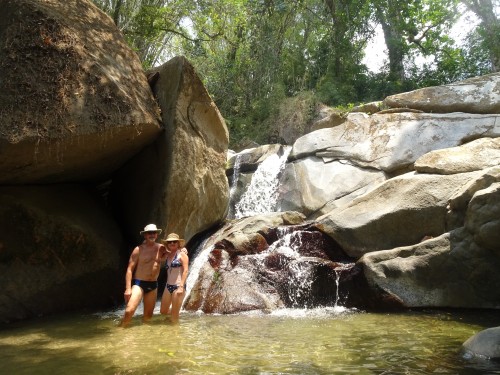 So… we’re getting ready to start our second week in Colombia, and what a time it’s been.  Right now it’s 92 degrees and 88% humidity at 13h00. It has become pretty clear to this Gringo why siestas are the order of the day here.  I’m hidin’ out, peckin’ away at the laptop with the sweat rolling down my spine.

The crossing was a dream.  We had 2’-4’ seas on our quarter most of the way.  At 06h00 on Saturday morning (36 hours into the trip), we rounded the point north of Santa Marta.  It’s not unusual to have 40 knot winds with the current piling the waves up around this point where the Sierra Nevadas rise up out of the sea.  This passage is consistently rated as one of the most difficult in the WORLD!  Yeah, that includes Cape Horn.  My red-headed weather forecaster and lifelong companion hit the nail on the head.  5-10 knots, 1’-3’ seas, as we watched the sun rise over snow-capped mountains.  I got the 2 Blackfin tunas that we caught filleted and into the freezer as we eased our way down to the IGY Marina at Santa Marta.  After we had the Girl properly secured in her assigned slip, screens and sunshades in place and lounge chairs out, one of the dock guys came by.  He didn’t think that the other guys had put us in the best spot and wondered if we might want to move before it got windy.  Long story short, we moved.  Later that night the wind came up to a steady 27 knots with gusts into the mid 30’s.  At 22h00 Suz and I were on the dock securing extra lines across the slip next to us, happy that we had moved.

Small world time.  We introduced ourselves to the Australian couple on the sailboat next to us.  They told us that they had some friends from Michigan that they had met in Indonesia several years ago and had travelled quite extensively with them.  Suz asked what city in Michigan.  “Grand Rapids” The name of their boat?  “Nepenthe” Aha! Must be talking about Carol and Jim (You remember them-we met them in Guadeloupe a couple of years ago.  You know the couple that started a 2 year circumnavigation and ended it 17 years later.) Well….Turns out that they didn’t go back to land after all, and they were about 20 miles up the coast here in Colombia. The 4 of them had just returned from a trip up the mountain to Minca, and were planning a 4-day jaunt to Mompox(Mompos) the next week.  Carol hoped that our new pals, Sue and Mike would talk us into joining them.  No problem!  Mompox was on our list of places to visit.  We got a hotel reservation, arranged transportation for Sue, Mike and ourselves, and made a plan to meet up with Jim and Carol there.

For the first day or so, we just got the “lay of the land” here in Santa Marta.  We quickly found out that in this city of 400,000 or so, about 3 people spoke English.  Crash the Spanish “How-To” books, and gracias de Dio for Google Translate.  After hitting the ATM, I finally found out what it feels like to be a billionaire.  (A Coke costs around 5,000 Colombian pesos. 10,000 COP is around $3.15 U.S.)  It took awhile to get the conversion thing figured out.  We had planned to do some hiking/touring inland from Santa Marta (hereafter SM), so we checked out the tour operators in town.  We settled on “Magic Tours,” and booked a day trip to the small village of Minca, located up in the mountains around an hour from SM.  It seemed like a good way to check out their operation before booking our big trips with them.

The next morning, our driver was at the marina gate.  We drove through the narrow streets of SM, congested with cars, motorbikes, bicycles, and yes, horse and mule-drawn wagons.  It took me about 5 minutes to realize that renting a car and driving in this snarl of apparent traffic anarchy was TOTALLY OUT OF THE QUESTION.  Nonetheless, we popped out the other side and made our way up the serpentine road to Minca.  So what’s in Minca? Not much.  Some small farms, growing coffee and cacao and some small hostels.  It’s known as a hub for backpackers and trekkers, and there are scads of them there.  Suz and I were definitely the oldest non-locals by 30 years.  What’d we do there?  We met our guide, Andrea and our 5 fellow walkers.  Our first walk was to a small coffee plantation, where we stopped and had some killer coffee.  One of our companions was a Brit who didn’t like coffee, so they brewed her a cup of Coca tea.  We also learned that only the indigenous men, not women, chewed coca.  It is legal to grow and smoke marijuana in your home, but not in public, nor is it legal to sell it.  Oh….the useful information tangents that we get off on. After the coffee farm, we hiked for another 2 hours to a small waterfall, where we cooled off under the rushing water.  From there, it was another hour or so to Andrea’s dad’s house on the side of the mountain, where he cooked us a wonderful lunch followed by some cacao drinks. Besides the ignominious moment when Yours Truly slipped off the bridge comprised of 2 bamboo poles spanning the creek, the hour long walk back to the village was uneventful.  I really thought that the least one of my companions could do was follow me in to the drink, or at least suppress their laughter, but no.  It wasn’t to be.  Ego severely bruised, but ankles unharmed (although rather soggy) I trudged (squishelly) down the jungle path.  Our ride arrived, and we decided we’d stick with Magic Tours for our next outings.

The Santa Marta marina is right in the center of town, so walking access is very easy.  Before it gets too hot, our routine has been to put a few miles on and explore.  After our Minca experience, we headed back to Magic with Mike and Sue in tow, to book our hike to Ciudad Perdida (The Lost City).  It’s said to be a pretty strenuous hike, so we’ve been trying to get some walks in before, even though we know that we won’t be able to get in shape walking on the flat at sea level.  We’ve got our trek scheduled to begin the Monday after Easter.  We’ll keep you posted.  If you want, you can check out The Lost City at:  https://ciudadperdida.co/

Lotsa stuff here in SM, so I’ll talk at ya