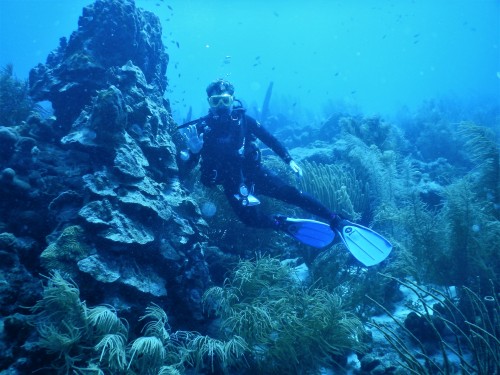 Here we are in Bonaire.  Alizann was really jammin’ on the way here from Grenada.  Following seas and a half to full knot current pushing us along, we shaved around 5 hours off our ETA.  That was the good news.  The bad news was that we arrived around midnight.  New harbor (for us), no entrance lights, narrow entrance, and the night was darker than the inside of a pocket.  Had a slip number, but had no idea where it was.  Another boating “DON’T,” but here we were.  Well…. It wasn’t as bad as it sounds.  We “What’s Apped” John on Seamantha.  He knew the marina, and told us where our slip was.  The radar and chartplotter were spot on, and the water depth here is in the hundreds of feet up pretty close to shore-all good.  We crept up within spotlight range and spied the opening, glided in.  We backed the Girl in between a finger pier and a 62-foot sailboat, and it was time for sips before turning in.

So….I’ve been pretty mum on the fish wars.  That’s because the score was edible fish 4, Alizann 0.  Not anything that I wanted to brag about.  We lost around 4 or 500 yards of line and 4 of our best lures.  ‘Nuff said.

Visits to Customs and Immigration were on the docket for Friday.  The mile-and-a-quarter walk should have taken 15 minutes, but morphed into a 2-hour ordeal as we fought the elements, walking in the steady rain, then dodging for cover as the squalls sporting 25+knot winds rolled through.  Three quarters of the way there, we said “The heck with it” and took cover in Julian’s Café for a late lunch.  We were soaked to the bone by then, so sat in the covered patio as the rain misted in-just a couple of loco touristas.  But…we did help them save their patio umbrellas which were turning inside out in the near-gale force wind.  No English speakers here, but their thank you’s were easily translated.  I had forgotten that even though this is a Dutch island, there is a preponderance of Spanish speakers here-shoulda brushed up on ours.  Actually, many of the folks here speak 4 languages-Dutch, Spanish, Papiamentu and English.  We got the job done with the authorities late in the afternoon.  No fees or taxes and super easy.  On the way home, we dodged ankle-deep puddles and scoped out some shops along the main drag.  Pretty evident that the local economy is tourist-based.  Shops catering to cruise ship passengers, and a dive shop on every corner, as well as restaurants of every ilk lined the downtown streets.

Sheeiit! How can you get a month behind in two weeks (or so it seems)?  1. Writing is super painful for me. (as a science geek) 2.  Time flies when you’re having fun.

So… Here’s the short version:

Already went through Customs.  Super easy, with gracious officers who actually seemed happy that we were here-Check.

Dive shops.  One on every corner.  I think that CVS and Rite Aid took their business model from these guys-if you leave your door unlocked, there’ll be a dive shop up and running in your space the next morning when you get up.  This island is set up for below the water activities.  If you need the toys, you can find them here.  Also-kudos to the internet.  Prices of equipment are very competitive, in fact, many shops will honor or beat an internet price for the same doodad.  We’re looking for an underwater camera and housing for the Admiral, and finding prices very competitive-especially when you figure in shipping costs. -Check

Food.  Grocery shopping is a real pleasure-even better if you can decipher Dutch (thank you, Google Translate!!)  Instead of going shopping and setting our menu based on what was available in the store, we’re back to creating menus, then shopping for what we need.  Reminds us of Martinique.  Better than Martinique, every Tuesday and Friday, there’s a free bus to VanDenTweel, the “Gucci” supermarket for your provisioning pleasure.  Eating out is also a pleasure, with multiple, not wrong choices.  In the 3 weeks that we’ve been here, we’ve eaten at everyplace from local holes in-the-wall to food trucks and kiosks, to fine dining.  So much for losing weight!  I’m loathe to recommend particular venues-ask around to decide what sounds good for your tastes.  You already know that we like fine dining as well as the funky stuff, so iguana soup, goat stew, and tripe casserole may not float your boat.

Diving.  What superlatives are left to be said?  The reefs have certainly changed from our last visit, around 30 years ago, and not for the better.  At that time, the dive guide listed 14 dive sites.  Now, the newest edition lists over 100.  That being said, the diving is still superb.  After two weeks for me to shake off the “Grenada Cough,” we have been diving nearly every day from our tender, “White Star,” who recently received a dive ladder, courtesy of “Yours Truly’s” monkey work, under the tutelage of the Admiral.  Oh…..diving.  We participated in a dive “cleanup” of the harbor after the Bonaire Sailing Regatta, which left plenty of human-made trash (translation-bottles, paper cups, and assorted crap on the bottom.)  100 divers pulled up around half a dumpster of crap off the bottom.  There, we met Marije and Bart, a young Dutch couple taking time off from life to backpack around the world.  The post-dive appreciation barbeque at Hamlet Oasis, hosted by “Dive Friends”, was an enjoyable evening.  The next afternoon, drinks on Alizann with Marije and Bart proved to be very enjoyable.

The Girl.  Well, she has certainly become a “Marina Queen.”  After anchoring out almost exclusively for the first 3 years, we have kinda settled into the “tie up, plug in, drop off the bikes, rentacar, and keep our lives cushy routine.  The whole setup here in Bonaire kinda pushed us in that direction anyway:

Touring.  We started with an all-day “Island Tour” with our driver, Therese, so that we could get our bearings and see the high spots.  Subsequently, we rented a Toyota HiLux pickup for a couple of weeks.  “Jason” our truck, has a high ground clearance, super-torquey gear ratio, the ability to jump boulders in a single bound, and a propensity for conquering deep water has served us well, and so far, has taken us over 8 hours of off-road touring through and over some of the most uninhabited regions of the island.  Tho’ the trails are “lower back and vehicle undercarriage challenges,” they  are well marked.  The extreme diversity of geologic (?) features is mind-blowing.  Every two minutes, it’s an “Oh, my God, or This is incredible!”  The Cadushy Distillery in Rincon makes several liqueurs and a vodka, based on the distillation of the local Kadushi cactus.  It’s worth a visit, with expectations kept in check.

Fellow cruisers:  Well…….the Dutch are wonderful people.  The rub…..they take a long time to warm up.  We’ve been next to a Dutch couple for three weeks now, and in spite of us asking them at every juncture if we can help with their boat chores, pick them up something at the grocery store, lend tools, or whatever…we’re still just neighbors.  There aren’t a lot of North Americans here in the marina, so last night, we went to one of the “all inclusive” scuba resorts, and met some friendly Americans.  Only trouble is, that they’ll be gone in a week.  Oh well, the Admiral will just have to put up with my company exclusively ☹.