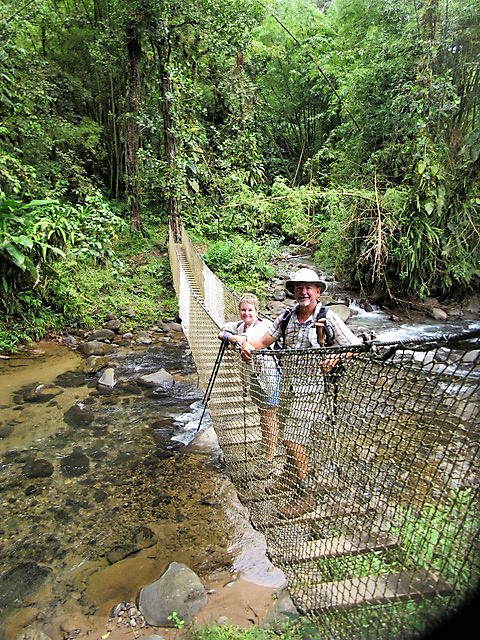 We ran to Martinique through acres and acres of Sargasso weed.  Didn’t get hung up once.  Seamantha followed us 10 hours later with no problems either.  In Martinique, we rented a car, got provisioned up, and looked forward to staying a week or so.  There were a few attractions that we had missed on our last visits, so we planned a trip to St. Pierre and Mt. Pelee, and one to hike the Jesuit Trail.  The hike was also on John and Paulette’s radar, so we took two cars up the mountain, and spotted one at each end of the hike, as we weren’t sure that we were up for a round-tripper.  Rated at a “7” on a scale of 1 to 10, with an elevation change of a little over 2,000 feet through steaming rain forest seemed rather daunting.  The hike was a bit challenging, but very doable.  It didn’t hurt that the day was cloudy and a little less hot that usual.  At the lowest point, we crossed the Lorraine River on a rope suspension bridge and stopped for a snack before climbing out through the dripping trees in the tropical rain forest.

Another day found Suzanne and I driving up to the North, for a visit to Mt. Pelee, and the town of St. Pierre.  Mt. Pelee is a quiescent volcano which last erupted in 1902.  In May of that year, it was responsible for the instant incineration of around 30,000 people and the total destruction of the village of St. Pierre.  The pyroclastic flow, reaching temperatures in excess of 1,900 degrees F, and charging along at a speed of over of 400 MPH left absolutely no chance for survival, the exceptions being 2 individuals.  One, Louis-Auguste Cyparis, was a prisoner, housed in a tiny stone hut with a door measuring about a foot or two on a side that was situated in the lee of a stone wall.  The other being Leone Campere -Leandre who lived on the outskirts of town.  The Volcano Museum in St. Pierre was worth the visit, with video and static displays.

More hikes were on the itinerary, but Ahhhh ”The plans of mice and men.” We got a call from back in the States.  Marty’s Dad was very sick, and we felt that we needed to get there as soon as possible.  We called Port Louis Marina in Grenada.  “Yes.  They could squeeze us in earlier.” Changed our flight to Michigan.  Did a “touch and go” in St. Lucia for duty-free fuel, and were tied up in Grenada 2 days later.  Four days to get the Girl “Hurricane ready” and we were off to Michigan.

We got back home to the boat on September 20th.  We didn’t have our bags on board yet, when an old friend reminded us that it was “Chicken Dinner Night” at Whisper Cove.  “Are you guys in?”  Hey, why not?  Quick shower, into our boating uniforms (for me-Carhartt shorts and a Tee shirt), and we were off.

The next week was a blur.  Reacquainting with old pals, going out to dinner, provisioning our larders, routine maintenance and repairs filled our days and evenings.  Unfortunately, one of our fridges had quit while we were gone.  Usually, that’s not a problem, as we empty them before we leave.  However….you may remember that we visited Martinique before flying back to the States.  Needless to say, all of the French goodies that we left had coalesced to form a rather odiferous goo in the bottom of the unit.  Oh, how I love FedEx.  3 days later, I had a new compressor control module in my hand.  That, coupled with a new cooling fan (which I already had on board), made cold work of the old fridge.  It was only…Mmmmh.. a “four expletive” job.  While we were at it, we pulled the other, functional unit and gave it the good vacuuming that it deserved.  So…let’s talk about the defunct WIFI antenna up on the mast.  That was about a “fifty-two expletive” job.  It only took two days and multiple trips up the mast (you know me and heights) to finally give up on the cable that was there, and replace it with a new one which we had brought back from the States.  The router is in the safety of the pilothouse, so the mast, ceiling panels, wire chases all had to be opened up to route the cable from the top of the mast down.  Good times.  It did, however allow us to clean the route along the way.  The Admiral standing by and giving directions while sipping on a pastel, umbrella decorated drink?  Surely you jest.  She was on a “seventy-seven expletive” course of her own, updating charts on 3 computers, then reconfiguring cables so that they would talk to “Otto,”our autopilot.  That stuff is waaaay beyond my pay grade, but I still don’t understand why you can’t just install the upgrades and carry on.  Job security for the Geek Squad, I presume.  Anyhoo…  The impellers and fuel filters are changed (oil and filters changed before we left the Girl).  The watermaker has been re-commissioned.  Everything SEEMED to be working 4x4.

The plan was to head over to Bonaire and do some diving and touring as soon as possible.  Our hurricane insurance be damned.  They want us to stay below twelve-and-a-half degrees North Latitude until November, but Bonaire hasn’t had a hurricane since the early 1800’s.  As beautiful as Grenada is, and as comfortable as we are in the marina with all our Pals, we were feeling the urge to move.  A weather window appeared to be opening starting in the evening of the 2nd, closing on Friday the 5th.  That forecast didn’t change for a week, and several models agreed, so we’re comfortable with its’ accuracy.  Right now, we’re 45 hours out of Grenada, having maintained a course of 271 degrees, True for 44.5 hrs.  Lines are out.  We hooked what looked to be a 50+” Wahoo yesterday, but after taking nearly all of my line, he swam back up under the boat, tangling the line so hopelessly that I had to cut it.  We’ve caught and released a couple of Skipjacks, and a VERY small Tuna.  We had our hearts set on some fish for the freezer, but now we’re not so sure.  Just heard a puff and went out to the bow.  A pod of around twelve dolphins treated us to a good show getting pushed along by our bow wave, all under sunny skies and an 84 degree temperature.  How’d we get so lucky?