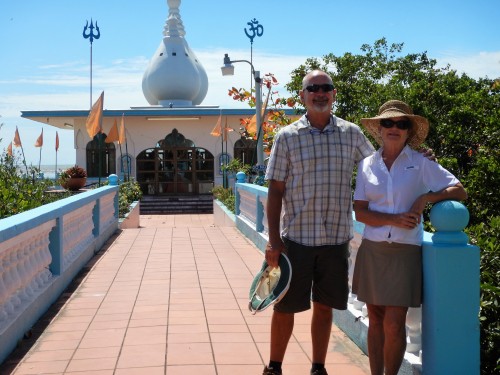 We were back in the water on Monday, as promised.  Our pal at Crew’s Inn, Meleena, found room at the Inn for us, and we were in our berth by late afternoon.  The relaunch was not without a little drama, however.  The boys that we had hired to remove/replace the stabilizer wings and bow thruster props didn’t show until 14h00, when we were scheduled to splash at 15h00.  They showed up without the proper tools, but the good news was that we had ‘em.  15h05, and the Travelift was ready.  They picked us up at 15h15, and we were splashed shortly thereafter.  Really?

After we went back in the water, we were basically looking for a weather window for our passage up to Barbados.  We took a tour to Pitch Lake with one of Jesse’s guys.  Pitch Lake is the largest of three asphalt lakes on the planet, the others being in Venezuela and California.  The lake is 75 meters deep and is said to contain over 100 million tons of asphalt.  Asphalt has been mined here for a few hundred years and was used in paving roads in much of the northeast of the United States.  Asphalt is still strip-mined here today and exported overseas.  The machinery doing the mining must be kept in constant motion, or it will sink and be trapped.  Sections of the lake are mined in succession, to approximately two meters of depth.  It takes less than 2 weeks for the asphalt to rise back up.  Meanwhile, other sections of the lake are mined.  We hired a guide to walk us out onto the lake.  It felt spongy underfoot, and if you stood in one place too long, you could feel yourself sinking slightly.  There are spots on the lake that are more liquid, and our guide was careful to route us around these, lest we be trapped in the tar.  The houses in the village surrounding the lake are in constant motion, moving inexorably toward the lake, gardens and paths circumvent pools of pitch which has bubbled to the surface.

On the way home, we visited two Hindu shrines: The Temple in the Sea, and the Dattatreya yoga center.  The Temple in the Sea was built by an indentured immigrant from India.  As the British colonials would not permit the building of temples on land, he spent many years hand-carrying bricks and cement out onto the mudflats of the Gulf of Paria to create an island for the Temple.  Restored in 1994, the temple is the anchor for a park on shore.  When we were visiting, a cremation was taking place at the park.  The Hindus here still do it the old-fashioned way:  The body is placed on a pyre, the fire is lit, and the ashes are raked up afterward.  We saw a couple of these ceremonies in locations that we passed on our road trip that day.  The Dattatreya Yoga center boasts the tallest statue of Hanuman (the Hindu monkey god) outside India, standing at 85 feet.

The rest of out days were spent wheeling and waxing the Girl, as well as other minor boat chores.  Afternoons found us gathering at the swimming pool with other cruisers.  Of course, Saturday mornings were Market Days in Port of Spain, and Saturday nights were “Bake and Shark” nights, when we joined with other cruisers at the local watering hole.  We usually had a table of 10-15.  Conversation was lively and the beer was ice cold.  Bake and Shark?  It isn’t actually baked at all.  We’re talkin’ a fried dough bread pocket filled with fried shark and other ingredients-maybe coleslaw, tomatoes, peppers, topped with garlic sauce, Chadon Beni (kinda like cilantro) sauce, and a little Peppah sauce.  Deeeelicious Trini street food.  Thursday evenings, Crew’s Inn supplied the charcoal, grill, tables and chairs for the cruiser’s potluck.  Everyone brought a dish to pass, and a meat, or fish, or ?? to grill.

Our projected couple day stay morphed into nearly 13 as we waited for the wind to quit howling.  Finally, the 22nd of April looked less bad, so, itching to leave, we settled for a forecast of 5’-8’ seas on a 10 second interval with 15-20 knot winds, which would be on our nose for half the trip, and our beam for the other half of our 190 mile passage, which we thought should take us around 24 hours.  We figured that we could take advantage of the North Equatorial Current, which had hampered our progress on the way to Tobago earlier in the Spring.  We were off the dock at 06h05 on the 22nd.  Our course was laid in to keep us around 10-12 miles off the coast of Tobago, to keep us out of the opposing current which always runs along its shore.  Just north of the eastern tip of Tobago, we would veer north to take advantage of the Equatorial Current.  The first leg of the trip was beautiful, as we cruised into 3’-5’ seas, under sunny skies.  The lines were wet, but no bites.  As we passed out of the lee of Tobago around 19h00, the seas increased to 4’-6’, darkness had fallen, we turned north with the seas now on our beam.  The Girl was rolling, but comfortably, thanks to her stabilizers.  Overhead, the wind had increased to 17kn with gusts to 23.  Suz had settled into bed around 20h00, and I was on the first watch.  All of a sudden, I felt a shudder, and an odd vibration.  The engine work load meter jumped to 65% from its normal 42%.  The engine temperature rose 10 degrees, and the fuel consumption went up 1.5 gallons per hour.  This all happened within about a minute or so.  The Admiral bounced out of bed and I cut the throttle.  “Sh#@! t, we must have picked up a net or something” Okay, we knew this drill.  Throw the prop into reverse, back up and whatever you have picked up will dislodge and you’re on your way.  Well, when you slow down, the stabilizers don’t work, and now the seas were running 5’-7’.  Stopping the Girl and wallowing in the troughs between waves in reverse was a cupboard-rearranging affair.  We rolled from beam to beam, and the cockpit was awash.  “Okay, that should do it.”  On our way again, I went below to check on the bilges.  Lifting the hatches, I could hear an ominous “Bang, bang, bang” against the hull.  Okay, repeat the backing up maneuver, this time at a higher speed, and for longer.  The wallowing between waves was magnified.  It was necessary to hold on with both hands to stay upright.  On our way again, the banging had stopped, and all seemed well.  Wrong!  Throughout the night at various intervals ranging from 45 minutes to 2 hours, we kept experiencing the same scenario, minus the banging.  The engine temperature would slowly rise, along with our fuel consumption and engine work load until we did the back-up maneuver again.  At every juncture, we acted more aggressively in the hopes of shaking our passenger.  We could see large patches of Sargasso weed with our spotlight, and we figured that we were dragging a net.  When it accumulated enough weed, the symptoms would become critical.  Going overboard with dive gear was out of the question, as Alizann was rolling from rail to rail.  We thought about heading due west to Grenada or the Grenadines, putting the wind and seas on our stern, but in the end, decided to push on to Barbados as we were really in no danger.  Worst case, if we lost propulsion, the wind and seas would carry us west to the Windwards somewhere.  We were 70 miles from any land. Needless to say, it was a long night.  At 08h00 on the 23rd, we ducked out of the current, changing our course to the northwest for Barbados.  It was now daylight, but we still couldn’t see what we were dragging.  At 11h00, we reversed for what would be the last time.  The surface of the sea was now covered with Sargasso weed in ¼ mile long patches.  We passed through effortlessly.  Whatever we had picked up was gone!!  I was almost disappointed, as I wanted to see what it was.  In the lee of the island, I was even able to wash some of the salt from our trusty little ship sailing into 1’-3’ seas.  We arrived at Port St. Charles, Barbados at 16h35, 34 hours after departing Trinidad.

John and Paulette, who had been there for two weeks aboard Seamantha were standing on the seawall waving when we arrived.  Paulette, true to form, had remembered that it was my birthday and had us over for her (in)famous rhum punch and munchies.  We went home early, fell into bed and slept like the dead.