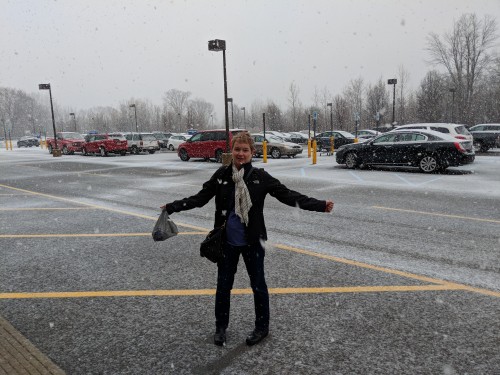 So…..I don’t usually do trips back to the States in the Log, but a trip to Ann Arbor to welcome our new Grandchild?  Whatever.  Suffer through it.  Jesse’s guy Stanley picked us up at 04h30 and whisked us off to the airport.  There were no gate agents or signs, but we got in with a family of 6, and started a line.  Forty-five minutes later, we had fifty people behind us (and another 30 milling around, waiting for an official start-Trinis don’t like lines, they wait until the last minute, then push to the front).  The gate agents sauntered in, en masse, and the young lady from American Airlines tried to move us.  Not a chance!  Trinis are also very outspoken, and not a little bit resistant of authority.  We kept our mouths shut as several people at the head of the line with us argued heatedly that we weren’t moving and risking giving up our place in the queue.  In the end, several male agents came out, and moved the tightly-packed line backwards so that everybody more or less maintained their respective positions.  (Of course, some of the loiterers wedged their way in, which is why nobody in line wanted to move in the first place.)  We held our ground, as this was not our first rodeo, and it was on to the next hurdle.  Every passenger needed to be interviewed one-on-one with a security agent (Yep, you heard me right).  Then…. every checked bag was opened and hand-inspected.  I guess Trinidad is a high-risk point of embarkation for flights to the U.S.  Didn’t mention it before, but several alleged members of an ISIS cell were arrested right before Carnival.  Maybe the airport was on high alert.  Fourteen hours after we got up, Alison picked us up at the airport in Detroit, and we were at her and Ben’s house in Ann Arbor.

Nash wasn’t due until the 25th but didn’t make his arrival until the 5th of March.  The ten days was interminable for Alison and Ben, but it allowed us to get a lot of work done around their house.  And…we saw snow.  First time in a couple of years.  That’s the Admiral in Lowe’s parking lot.  Among other things at the house, we replaced all the copper plumbing in the kitchen, ran a new circuit from the main panel, installed a dishwasher and garbage disposal and plumbed an icemaker.  A ceiling fan was added to the living room, and we put 3 coats of paint on the inside trim of the windows, which had all been replaced during the Summer.  The list goes on, but you get the picture.  Busy, busy, busy.

Gotta quick tell you a funny story.  Here’s a copy of an email that I sent to John, Paulette, Ken and Sylvianne:

Alison and Nash were supposed to come home today, but her blood pressure is high, so they decided to keep her another day.   Nash is doing great.  Can't believe it, but he almost turned himself over yesterday.  But....I digress. A couple of months ago, Ali told Ben that she wanted Schramsberg Cremant when they came home from the hospital with the baby.  Schramsberg is a California sparkler that happens to beat many of the houses of Champagne in French competitions.  It is also the official sparkler of the White House since Nixon entertained the Chinese.  Well...Ben had a lot on his mind and failed to get a couple of bottles.  Hey Marty!  So, I call the high-end wine stores that I know in Ann Arbor, and no dice.  Finally, I find a little hole-in-the-wall liquor store that has the goods.  I get a couple of bottles of Cremant and a bottle of Blanc de noir for Suz and I.  Night before last, I grab what I thought was the odd bottle and cracked it.  Pour it, sip it...sh**, it's one of the bottles of Cremant!  No problem, we're coming home from the hospital today and we wheel in to pick up another bottle of Cremant.  As you know, Suzanne loves hardware stores and marine chandleries.  I guess that she likes liquor stores too.  I make the purchase, and she says "I just want to look around a bit. Wow, they have a ton of single malts and Bourbons.  Look at this, look at that" & etc.  She says that she just wants to check out their rums.  Now the owner's interest is piqued. He says that he has rum from this shelf divider to that, floor to ceiling.  Next, he's telling us that he saw a show on TV about rum, and that some of these distilleries have stockpiles of rum in barrels in warehouses as far as you can see.  "Yeah, we know.  We live in the Caribbean, and every island has a half dozen distillers." The Admiral says "They don't have Don Q.".  "Oh yeah, I do.  It's on the bottom shelf"  "Crazy, we have a friend that loves Don Q.  He had us buy 6 handles for him when we were in Puerto Rico.” ” That’s really strange." he says.  "I had a guy call me from Trinidad today asking me to deliver some to a friend that just had a baby"  "You taking it to ***** Dunmore Rd.?"  The rest, as they say, is history.  We took it and two bottles of Veuve, saving you a delivery fee.  CRAZY, No?

Is truth stranger than fiction?

When the kids came home from the hospital, Ben’s parents and sister came in all the way from Pennsylvania for a visit.  It was a bonus for the Admiral and I, ‘cause we hadn’t seen them since Ali and Ben’s wedding in 2015.

After a month of being house guests, it was time for us to leave and let their new rhythm settle in.  The flight home was uneventful, although boarding the plane in Miami was a bit unusual.  Customs and Border Patrol ,with dogs in tow, was on the jet bridge, greeting every passenger before they boarded the plane.  Home again, just call us Grandma and Grandpa.