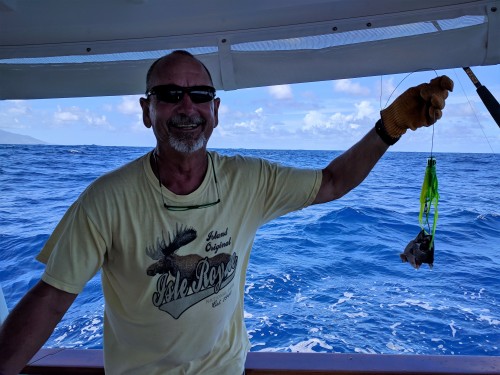 John and Paulette arrived just when we were finishing up with our projects.  The last coat of Awlbrite went on the teak, Gazza and Peter finished up with the detailing, and I was done with the mechanicals-for now.  It looked like the wind and seas would abate somewhat in a few days, so we made ready to skedaddle to Tobago.  We said goodbye to Rob and Cindy over dinner at the marina, and had our last Indian food fix at “Spice of India” (sister restaurant to “Masala Bay”, which we enjoyed several times while at Marigot.)

On the 18th of January, we started our first passage of the new year.  Alizann was off the dock at 05h08.  Our plan was to run in the Caribbean down the lee side of St. Lucia, then into the Atlantic for a straight run to Tobago.  The seas were forecast to be 3’-5’, increasing to 4’-6’ by the end of our 26-hour run.  Winds pretty steady at 15-18 knots.  Both the wind and waves were predicted to be just a little aft of our beam, causing us to expect a bit of a rolly ride. As Seamantha is a larger boat, and thus a bit faster, we left about an hour ahead of John and Paulette, figuring that they’d catch us sometime in the middle of the afternoon.  The first four hours were gorgeous.  We had a slight push of current, and seas were running less than 2’.  As we rounded the southern tip of St. Lucia, the seas ramped up a bit to 2’-4’, pretty much on our beam.  A 1.5 knot current pushing against us was going to be the story of our life for the southbound cruise.  (In actuality, it varied from .5-1.5 knots nearly the whole trip.)  The lines went out, and by 12h30, the fishing drought was over.  We hooked into a 4.5’ Wahoo, and before we lost him 15 minutes later, he gave us quite a show.  At 13h00 the reel was zingin’ out again.  This time, we boated a 48” Mahi.  Less than a half hour later we boated a 42 incher.  At the same time, the other reel was spoolin’ out.  When the Admiral brought it in, there was a disembodied Skipjack head on the lure.  Missed another biggie!  Yow!  Suz thought that the fishing would be better out in the Atlantic, and she sure was right.  Stopping for the fish thing slowed our progress, and Seamantha caught and passed us.  By now, the seas were running 3’-5’ with a bit of chop on top, thanks to the now steady 18 knot winds.  Getting a bit too wavy to fish, as every time we hook up we have to slow the Girl, and she commences to rock and roll, pitch and yaw.  It’s always hard to gauge the height of seas, but when I’m standing in the cockpit and can’t see over the top of the waves, I feel pretty comfortable calling them 3’-5’.  We were still 19 hours from Tobago, so our little buddies folded up in the cooler needed to be butchered and refrigerated.  Brought out the Husky portable workbench, braced my back against the bulkhead and went to work.  Of course, after I was done the cockpit looked like the scene of a mass murder.  I didn’t start feeling pukey(sp?) until I was just about done cleaning up on my hands and knees.  Not good.  Suz had to come down and chunk up the filets and throw them in the freezer while I stood in the pilothouse door, gulping in fresh air.  (Note to self-take antiemetics when filleting in cockpit in rolling seas.)  Some pre-cooked sloppy Joe’s hit the spot, then we settled in for the evening.  Four to six feet now, winds back to around 15 knots.  The inside of the cupboards were being re (or is it “dis”) organized as we listened in amusement to the clatter from the outside.  As the sun sunk below the horizon, it was dark as the inside of a pocket, being just a day or two from New Moon.  Suz hit the rack early, so by 00h30, she had six solid hours of sleep under her belt when she came on watch.  By 06h30 when I got up, the seas had dropped to 3’-5’, winds still 15 kn, and the current was abating.  The Admiral said that during her watch, the current had become so intense that she lost another knot of headway, causing her to have to increase throttle.    By morning, Seamantha was two and a half miles ahead of us and headed for the barn.  As Tobago drew closer, the seas dropped to 2’-4’, then 1’-2’ over the last hour of the trip.  When we entered the harbor John and Paulette had the hook down, and Suz maneuvered the girl into position where I snubbed the anchor chain with 225 feet out in 40 feet of water.  While I was studying our position relative to other boats, an “Oh sh$#t” exploded from the door of the pilothouse.  “John and Paulette just dropped their dinghy!” “So?”  “I mean DROPPED, not lowered.”  We couldn’t see their tender due to the relative positions of the boats, but we could see bright red gas cans floating on the water.  Now we’re getting nervous as they’re not answering their VHF and we can’t see either of them.  Boats rotate a bit.  There’s John.  There’s Paulette.  This all transpired in probably less than a minute, but it seemed like an eternity.  Amazingly, all four of the dinghy lifting lines severed at the same moment, dropping the tender straight down where it landed upright.  What if the dinghy hadn’t been clear of the boat?  What if only one or two legs of the bridle had broken?  What if it had swung back and hit one of our pals?  Thankfully J & P had some good JuJu going in a bad situation.

Time now for the Customs and Immigration Chacha, but that’s a story for