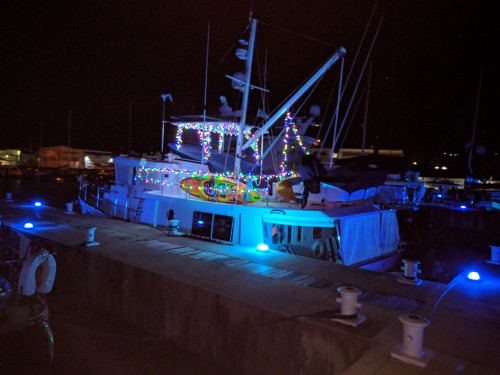 Time to giddyup.  The weather window popped open, so we were off to St. Lucia.  Had reservations for a slip beginning on the 15th, but figured that 2 days early was no big deal.  Emails to the office went unanswered, and our phones were acting up by not acting at all.  Arriving at Rodney Bay Marina in St. Lucia, we found that there was “no room at the inn.”  Oops.  Elton, the Dockmaster worked his magic and put us at the “Big Boy” dock, where Alizann nestled in among the 100 and 200 footers.  He even got us a U.S.A. power supply.  Livin’ large in the expensive seats (at the cheap seat price).  He said that we’d probably have to move over to the “poor side of town” as soon as a spot opened up on the other dock.  So, I’m doing the post passage engine room check, and there’s some dried salt on the floor of the generator compartment right under the raw water cooling pump.  Sheesh!  My handy dental mirror and flashlight reveal that there’s also a trickle on the underside of the pump.  I knew that it was going to be there, but I like to delude myself now and then, preferring to think that everything’s O.K. when it’s not.  I know the drill.  There’s a spare pump on board.  We’ll get another spare when we’re home at Christmas-Ka-ch$ng!  Continuing the inspection, there’s a puddle of dried rust on the sole where the generator exhaust passes through the engine room bulkhead.  Hmmmh.  It’s directly under a stainless-steel elbow which is bright and shiny.  Mirror and flashlight reveal a different story underneath.  Clean rust trail off with emery cloth-shiny, no worries.  Tighten hose clamp, repeat delusional thought process.  Run generator for 10 minutes-no leaks.  Finish engine room inspection-all good.

Over the next few days, we get The Girl dressed up for Christmas with outdoor lights, etc.  In the meantime, we meet up with Kim and Zim (s/v Someday-St. John’s and Grenada), who are here for the start of the ARC Around the World Rally.  Theresa, Randy and the boys from Pilot’s Discretion are here too.  After being on the megayacht dock for a few days, we figure that they’re not moving us.  Meticulously get all the chafing gear on the lines, double-tie, get down extra fenders so that we can leave the Girl over Christmas.  Kiss of death.  Next morning, Sean, the marina manager comes by to tell us that we need to move.  Grrrhh.  Meanwhile, the elbow is nagging me.  Pull hose on other side of bulkhead to check inside of elbow.  Looks good, but the elbow is made from SS tubing, not pipe which is thicker.  Google, Google, Google.  Okay, the experts say that the fittings should be SS pipe or fiberglass/polyester.  We better have a spare.  Call Krogen-Gregg says that he has a new Stainless elbow that he can ship.  Thinking, thinking.  Hmmh, if it does start leaking, and I have to replace it, why not use fiberglass, which will never corrode.  Kill a half day online.  Order fiber elbow to be delivered over Christmas.  Sheila, just add it to the pile of boatstuff that’s accumulating in your guest bedroom.

“Oh, you’re leaving your boat in the marina for ten days with no one onboard?  You need a Temporary Importation Permit.”  Are you kidding?  The Customs cha-cha all over again.  (Why can’t I just keep my mouth shut?)  Customs needs a boat inventory before the officer can come to do a boat inspection before we can get our permit to leave.  Ka-ch$ng!  Okay, most of our stuff (spares, tools) is enumerated on spreadsheets, but it’s not a bad idea to have a list of all our goodies for insurance purposes.  We ended up with 5 sheets, single-spaced, 2 columns for our boat inventory.  When we gave it to the Customs officer, his eyes nearly popped out.  We made it about halfway through the first page, when he said he’d take our word for it.  He had an icy drink, signed our papers in triplicate, and was on his way.  (They DO love their paperwork down here in the islands.  Suz and I believe that they comprise 90% of the world market for carbon paper.)

Kurt picked us up at Noon on the 18th, for our hour-and-a-half drive to the airport.  Fourteen hours later, Suzanne’s sister, Sheila, picked us up in Asheville, North Carolina.