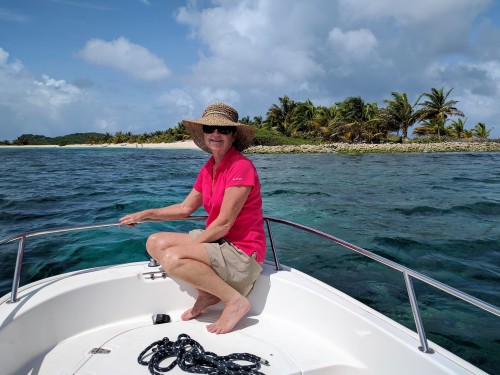 Hurricane season is over!!  Doesn’t mean that there couldn’t be any more storms, just means that our insurance company will allow us to move back up into the “hurricane latitudes”.  Yesterday, we left Port Louis Marina in St. George, taking a short shakedown cruise around the south end of Grenada to Woburn Bay.  The short trip allowed us to try out the Girls’ systems which have all been asleep for the past months while at the marina.  Everybody but the weather station at the top of the mast behaved well.  We can live with a funky wind speed indicator.  We spent the night in Woburn, picking up our last meat order from Gilles, the butcher/owner of Whisper Cove Marina and restaurant.  Our order was short a couple of pork tenderloins.  Gilles said that if we could stay until Friday, we could get our tenderloins, as he was “killing the animal” on Thursday.  We’ll survive without-grabbed a couple of cutlets instead.  This morning, we were off the hook by 07h14.  By 08h15, we were at the dropoff on the windward (Atlantic) side of Grenada, heading North with 2 lines wet.  So far, (at 10h00) not a single nibble.  On the bright side, we’ve had no hydraulic overheats, and all systems running well over 2’-4’ beam seas.  The plan is to stop at Ronde Island, near Kick ‘Em Jenny (the underwater volcano) for lunch.  If the anchorage isn’t too rolly, we’ll stay the night.  Otherwise, we’ll continue north to Carriacou.

Here I am, a couple of days later.  The anchorage at Ronde Island was really pretty.  There was a fair bit of swell coming around the corner, but it wasn’t anything that the flopperstoppers couldn’t handle.  We ran up to Sandy Island, off Carriacou the next morning.  We’ve been on a national Park mooring ball here for the past two days, our bow pointed toward the town of Hillsborough, some 2 miles away.  The prevailing winds have us positioned beautifully.  Sunset off the back porch, with the full moon rising over the bow shortly after.  Off to our port lies Sandy Island, its’ white beach 400 yards distant.  There are only 10 mooring balls here, and anchoring is not allowed.  Besides ourselves, there have been 3 boats here every day.  The other 6 balls turn over daily.  It’s really nice to be out of the commercial harbor and into clean water.  We were able to run our watermaker for the first time in months.  We held our breaths as we awakened the slumbering beast, and to our relief, she purred along smoothly.  Chores have been held to a minimum, although I’m trying to reclaim the lines that ran off Alizann’s bow to the submerged mooring in Port Louis.  Even though we had the divers scrub them monthly, they came up covered in soft and hard growth.  We soaked them in buckets of bleach solution for two days, then trailed them off the back of the boat after scrubbing them a foot at a time, and scraping the barnacles off.  Another bleach bath, and they still smell DISGUSTING!  They’re hanging in the sun now-we’ll see.  Ed on “Slowdown” says that he just throws them away after a season-now I know why.

On Friday, we walked on the beach, relaxed, and started to get reacquainted with life on the water.  Yesterday, we had an early morning snorkel off the northeast tip of the island, finding a nice patch of healthy coral and a diversity of fish and invertebrates.  In the afternoon, we took a dinghy ride over to Hillsborough and booked a 2 tank dive with “Deefer Divers” for tomorrow morning (Monday).  We’re hoping to get a few of our new favorite dinner fish (Lionfish).

The dive with Deefer Divers was a “Red Carpet” experience.  They were expecting a dive club from Illinois the next day, booking their boats for the rest of the week.  As such, the full staff was with us (for 6 divers), I assume to get them all on the same page before the arrival of the twenty-some-odd divers from the States.  We had the divemasters from Deefer, the divemaster and new manager from Arawak Divers (Deefer’s sister shop in Tyrell Bay), two boat captains, and one of the owners of both dive shops.  Suzanne and I dove with Mike, the new manager of Arawak (soon to be Carriacou Divers), and his mate, Bob.  They both turned out to be super “spotters”.  In addition to bagging a half dozen Lionfish, we saw uncounted lobsters, 9 Manta Rays (groups of 2, 3, and 4), several Stingrays, a field of Garden Eels, a Nurse Shark, a school of Squid, a few free-swimming and hidey-hole ensconced Moray Eels, and the usual suspects of coral reef habitats

We had planned to head out after the morning dive, but it was a beautiful day, so we just hung out on the Girl and enjoyed the post-dive “glow”.   Midafternoon, “Exclusive” (everybody in the islands has a nickname) and his twin boys came by with fresh lobster.  Sure, why not?  The tail went on the grill with a couple of steaks.  No red pop on board (we’ll wait ‘till the French islands to restock), but the Champaign washed it all down satisfactorily.

Morning came soon enough.  We dropped the dinghy, headed in to town and cleared out with Customs and Immigration.  We walked the streets a bit, and checked out the grocery stores, deciding that this definitely was not a provisioning spot on any return trip.  We’ll certainly be back for an encore with the dive operation here, though.  We’ve heard that Sister’s Rock is a primo dive, so we’ll try to time our stop to coincide with a Neap tide, as the current out there is ferocious during a Spring tide (it was a full moon this weekend).

Off to Union Island in Saint Vincent and the Grenadines (SVG).  JT Pro Kiteboarding Center is calling us back.