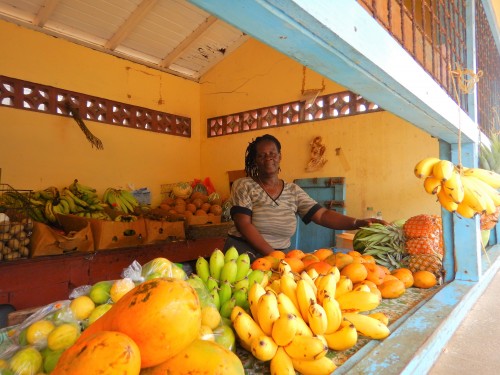 The passage to the Tobago Cays wasn’t exactly taxing.  It was windy (what’s new), but it was only a two-hour trip. The Tobagos are five small islands, four of which are encircled by a very shallow reef to the east (the prevailing wind side), creating a nicely protected anchorage.  The fifth, to the east was the island that the beach bonfire scene from the “Pirates of the Caribbean” was filmed, Petit Tabac.  We rounded into the anchorage, which is a national park, and dropped the hook onto a sandy bottom in fifteen feet of water.  We passed on using a mooring, as it was rumored that they were poorly maintained, resulting in a boat breaking loose several months earlier, with significant consequences.  The” boat boys” were in fine form here.  Several in their pangas approached the Girl within the first half hour of our arrival.  “Need bread?, Need fish?, Need water?, Want a Tee shirt?, Have any garbage?”  These entrepreneurs come over from Union Island, several miles to the south to try to scratch out a living.  The further south that we have travelled, the more ubiquitous they have become.  The vast majority are very polite, but once in awhile, you encounter persistence that borders on aggressive.  These guys are working, doing the best that they can in a part of the world where opportunity is very limited (huge understatement), so we try to patronize them whenever possible.  Cruisers that we have met along the way have raved about the Tobago Cays.  We were underwhelmed.  We could see it being a beautiful spot in the Summer, when the wind was non-existent, and no other boats were cruising.  In twenty-something knot sustained winds, under overcast skies-not so much.  We went out in the dink to do some snorkeling, but couldn’t really find a spot that was appealing, so we didn’t.  BTW, don’t remember if I mentioned this, but we met a French-Canadian (Quebecois) couple in Bequia that were cruising on their 40-something foot sailboat with their seven (yes, count’em folks, seven) kids, the eldest being twelve.  Their youngest was one, and they’ve been cruising for 2 years.  No.  We didn’t ask.  Anyway, we were anchored right in front of them here in T.C.  We reconnected with them, and were able to unload a gallon or so of boxed milk, and some other stuff that we didn’t think would survive the Summer on the boat.  After two days, we decided that it was time to push on to Union Island.  We had the choice of two potential anchorages.  One, Clifton Harbour, was off the main town on Union Island, with the potential of being very windy.  The other, Chatham Bay, would be sheltered and very quiet, with little or no population.  No brainer, right?  Wrong.  Just off the bay at Clifton, tucked in behind the reef was the home of JT Procenter Kitesurf.  Suz and I had been thinking about learning to kiteboard for the past few years.  Only problem was that everyone that we saw doing it was a tad bit younger than us.  Well, we decided to go on in and ask the pros if they thought that two sixty-somethings were trainable, so it was off to Clifton Harbour.

Another short hop brought us into Clifton Harbour.  As has become the custom, we were met by a boat boy, wanting to take us to a mooring ball.  “No thank-you.” Then, the litany of questions of do you need this or that?  We brought the Girl up into shallow water just east of the moorings, and just west of the kiteboarding center.  Facing into the wind, the bow settee was a perfect grandstand seat for the numerous boarders already riding in the shallow bay.  We didn’t waste any time in getting to shore to ask about lessons.  “No problem.  If you’re fit, it doesn’t matter how old you are, we had a seventy-year-old on a board last month.”  So….We signed up for an “Introductory Lesson”  Long story short, after a couple of lessons, we can both get up on a board and ride in a straight line (more or less).  Even with bruised ribs and some coral rashes, we were both all smiles, ready to return in the Fall for Act 2.  Besides the boarding, we found Clifton to be a place worth returning to.  The produce stalls in the town square were well-stocked every day, and Yummy’s Bakery makes the best Roti in town, as well as fresh baguettes.  The folks were very friendly, and it is rumored that there are some nice restaurants as well.

After 4 days in Clifton, we cleared out of S.V.G.(Saint Vincent & The Grenadines), and pointed our bow to the islands of Petit St. Vincent and Petit Martinique.  The former is part of S.V.G., the latter, Grenada.  Petit St. Vincent is a privately-owned island with a very exclusive resort, it’s only structures.  Petit Martinique, a mile or two distant, has a population of less than 500 people.  We anchored between the two, inside a protecting reef, close to a beautiful sandy beach on PSV.  Even though it’s a private island, guests from boats are welcome to use the restaurant and the beach bar, “Goaties.”  We did our best to go ashore, but the seas refused to cooperate.  The dinghy dock was treacherous in the wind and swell.  After 15 minutes of trying to tie the tender so that it wouldn’t get bashed on the dock, we gave up (a stern anchor wouldn’t hold on the scrabbly bottom).  We weren’t cleared into Grenada, and there is no office in Petit Martinique, but official presence is very sparse here in this no-man’s land between the two countries.  Which brings me to a story:  Petit Martinique has been known as a smugglers’ den for the past century or so.  Rum running was a main revenue source.  Rum running in these islands where there is a distillery on every corner, you say?  Ahhh, this is different.  Barrels of 80% rum alcohol, bound for blending elsewhere were intercepted, bottled, and sold as “strong rum”.  I’ll say, 160 proof!  Now, strong rum is the unofficial drink of SVG.  It’s also one of the reasons that you need to be careful about your consumption of rum punch, which I once considered a “foo-foo” drink.  I’ve seen more than one unsuspecting American feeling no pain after a couple of these.  At some time in the mid twentieth century, a new governor was elected in Grenada after running on a platform which included bringing the smugglers of P.M. to heel.  After he was elected, he embarked to Petit Martinique on a publicity junket as a show of force.  As his boat approached the dock, he could see that the pier and harbor were lined with people.  They were all wearing black!  At that point, he asked one of the ship’s crew what was going on, and was told “They’re dressed for your funeral.”  Apparently, he never went to shore, headed back to Grenada, and didn’t fulfill at least one of his campaign promises.  We headed the dinghy over to Petit Martinique, where the docking was much easier, and strolled much of the perimeter of the island.  There isn’t much going on there, but the people are nice, and the island is pretty.  We picked up some cheap booze (Hmmmh.  Yeah, we bought some), and spent a rolly night on the hook.  By the way, my rum punch smoothies, courtesy of our Vitamix blender have never been better.

It didn’t look like the weather was going to change for the next few days, so the next morning it was time to continue south, aiming towards Carriacou, which is part of the nation of Grenada.  We had heard stories from other cruisers, and on the internet, that the Customs and Immigration officers in Carriacou were a little less than enthusiastic about their jobs.  We didn’t find them to be rude and abusive as others had reported, but Suzanne did wait patiently for a good bit for the officer to terminate a personal call on his cellphone.  By the time that Suz and I had left the office, the four of us had shared a few laughs.  We think that a lot of the enmity between officials and boaters arises from preconceived notions on both sides.  Suzanne is good at “breaking the ice” with a little plain old civility.  Here in the islands, it’s considered bad manners to “get right down to business” without exchanging a few pleasantries first.  At the end of the day, it’s important to remember that we’re guests in another country, and that these officials are not our employees.  Being pleasant also moves you to the front of the line, and gets you on your way quicker.  End of rant.

We saw Ed (SlowDown) on our way to Customs, so we joined him and Cheryl for sips that evening.  They were on their way to Grenada the following day, and we talked about all of the things that we had to do to get our boats ready for Summer.  By the time that we returned to the Girl, we had decided to head to Grenada as well.  We’ll explore Carriacou next Fall.  Spending a week or so in Alizann’s Summer home would allow us to get to know the marina staff, and our neighbors before jetting back to the States, and leaving the Girl all alone.

Sooo……In the morning, we were off to Port Louis Marina, on Grenada.