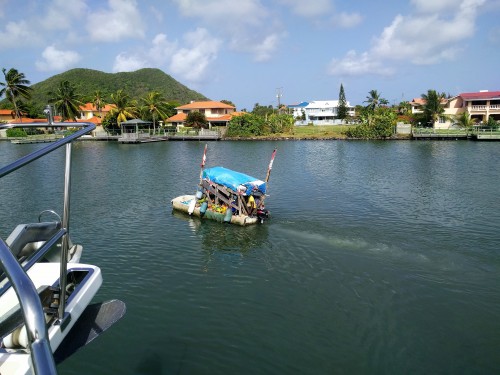 Well, the flopperstoppers got a rigorous test in the Bight off Roseau.  After a night of 3’ swell on the beam (no exaggeration), we pulled them aboard at 04h15.  The new “bird” did very well.  Our older (and undersized one) came up waaayyy too easily.  The rings holding the lines to the wings had separated, allowing the bird to hang at a ninety degree angle.  No Bueno, but fixable.  By 04h25 we were underway on the 12 hour passage to Le Marin, on Martinique, where we have tentatively planned to dock for a couple of months over the Christmas holiday.  The passage was pretty snotty, but we had expected it.  All of the cupboard doors had been Velcro-tied closed, and everything that could take flight was stowed away.  What we didn’t expect was for the hydraulic oil cooler to take a hike, causing us to overheat the hydraulic system.  Every hour or so, I was in the engine room, bleeding the raw water pump and sea strainer, coaxing it back to life.  Of course the lines were in, and we continued our streak of nobitesnofish.   With the anchor down in the bay outside Le Marin, we headed to shore to clear Customs and begin our reconnaissance mission.  We had no sooner tied the dink up than Bobbie and Craig (Mona Kai) appeared on the dock.  They had just arrived, and were leaving their boat here while they flew home for Craig’s family reunion in Illinois.  By the time we got done yakkin’, we barely made it to clear in before the office closed.  Next day, I opened up the raw water pump for the oil cooler, and inspected the impeller and cam.  They looked Okay, but I replaced them anyhows.  Later, we scoped out the rental car offices, located the boulangerie (always a must for baguettes on French islands), noted the inventories of the marine stores and visited the grocery store to check the produce.  We decided that this was the place for our long stay over the holiday, so made our reservation at the marina office.  Our day wasn’t allworkandnoplay.  We ended our recon with a fashionably late lunch at “Zanzibar”, a Paulette and John recommendation.  After a two hour lunch and a bottleawine, we were all about a dinghy tour of the harbor, and the little hurricane holes around its’ periphery.  Looking forward to our next visit, we had the hook up by 07h00, headed for Rodney Bay on St. Lucia.    Lines in the water, our drought ended.  The big gold reel was spinning off line so fast that it was almost smoking.  I increased the drag to the stops, and it continued to run.  After 400 yards were off, I was beginning to wonder if that bad boy was going to strip the reel.  All of a sudden, the rod snapped back, and the line went limp.  Dunno what it was, but it was big and powerful.  At least he left me my lure.  As we neared the island, we rejoiced in the fact that the oil cooler had performed flawlessly in the heavy seas.  We were docked at the IGY marina in Rodney Bay by noon.  Of course, the skies broke open right as we neared the dock, just in time to give us a good shower.  The marina there has a dock with U.S. shorepower pedestals, making it possible for us to do laundry and run the air conditioning.  Having a sackful of dirty clothes, and a very salty boat interior in need of a thorough cleaning, the washer and air conditioning would be handy.  After clearing Customs and checking in, we walked the docks in search of the sailing vessel, “Slow Dance” Ed and Cheryl, her owners, are friends of John and Paulette’s and expected our arrival.  They were both knee-deep in boatchores, so we agreed to meet for sips at the dockside Tiki bar later that evening.  Even though the oil cooler had not failed on this leg, it still hadn’t been fixed, so I didn’t delude myself-it needed attention.  But…….the engine room was too hot to fuss with the oil cooler, so we rolled up our sleeves, filled the sink with Murphy’s soapy water, fired up the air conditioning, started the washer and got down to it.  Four hours later, the Girl was standing tall again, and Suz and I had clean clothes back in our drawers.  Definitely time for sips.  Besides being fun folks, Ed and Cheryl shared a wealth of information, having cruised this part of the Caribbean off and on for over a decade.  On Monday, we made use of some of the tips that they shared with us.  That is; AFTER I spent a couple of hours in the engine room, taking apart the oil cooler, removing its’ hoses, backflushing it, and basically not finding anything wrong with it.  GRRRRR!  We found the ATM, hit the grocery store (which was pretty nice), and checked out the dive shop that Ed had told us about (John and Paulette got their SCUBA certification there and had raved about it).  Walking into Dive St. Lucia’s shop was like stepping into another country.  It was easily the nicest dive shop that we’d ever been in.  Besides the beautiful showroom, their educational facilities are top-notch.  They have a swimming pool with a 14’ deep end, replete with a wheelchair hoist for accommodating handicapped students.  Their classrooms are well-lit, and air-conditioned, with up to date audiovisual equipment.  They have 2 custom-built dive boats which look like new.  Before we left, we had signed up for a class to get our enriched gas (Nitrox) certification, and 2 dives the following day.  Before heading back to the boat, I stopped at the chandlery to pick up some European electrical parts so that I could fabricate an adapter for the Girl’s visit to Martinique next Christmas.

The class was a breeze, Suzanne and I were the only students.  By 09h00, we had aced our tests and loaded our gear on the boat.  The dive site was a 40 minute ride.  It was a joy to have someone else drive and we used our time to meet 2 other cruising couples with whom we’d be diving today.  The first dive was along a fringe of coral surrounding a small bay.  The reef was very healthy, so we were pleasantly surprised.  When we surfaced, lunch had been served.  Lunch.  Not snacks.  Really?  Roasted chicken, peas and rice, fried plantain, green salad.  What a treat!  The afternoon dive was on a small wrecked freighter which had been intentionally sunk for use as a dive site.  Back on the surface, fresh fruit for the ride home.  We had so much fun that we wanted to go the next day, but were told that there were no openings.  Our new cruiser buddies, Bob, Suzanne, Kevin and Ellen wanted in, too, so when we returned to the shop and whined a bit, Marcel (the owner) called a couple of employees to see if they could come in the following day.  Voila!  We were a go.  Bob and Suzanne asked us to join them for dinner, but we had already planned to eat at a local steakhouse with Ed and Cheryl.  They ended up being at the table next to us at the same place. 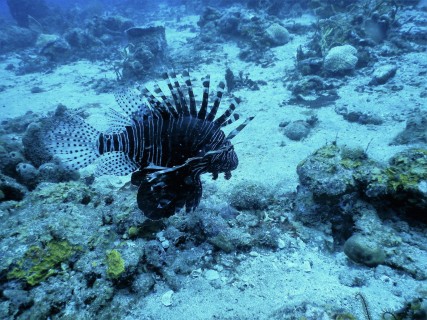 Today, Wednesday the 15th, we dove Superman’s Flight, a dive site just below the Pitons (Gros and Petit).  The dive was spectacular.  We saw beautiful sponges, corals, invertebrates, fish and crustaceans of all types.  Lunch was great again, the afternoon dive in the same bay, was very nice too.  We’ll leave the marina tomorrow and grab a mooring ball below the Pitons for the night.  There really isn’t much of a weather window, it’s just going to be a little less crappy on Friday than it will be for the following week.  Our plan is to cross to Bequia (in the Grenadines), travelling in the lee of St. Vincent.  We don’t plan on stopping in St. Vincent (beautiful island, but lots of crime against boaters), but if the seas are untenable, we’ve heard of a marina on the south end of St. V that has good security where we can duck in.

The internet is miserable here, so I’ll put this up