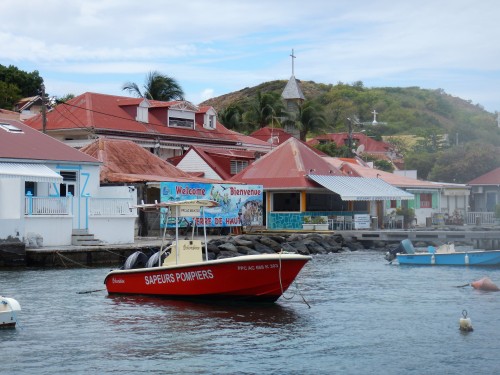 Ahhh…. Les Saintes.  Our few days on Terre-de-Haut flew by.  With John and Paulette, it’s pretty much non-stop.  We toured the French fort, Fort Napolean, took a half-day hike to visit all the beaches, had a Gelcoat repair seminar aboard Seamantha for J & P, went out to eat three times (hey, it’s a French island, and we were with John and Paulette), had fresh baguettes every day (see above), and visited the nearby anchorages by dinghy.  These islands are a tourist destination, so of course, there were lots of shops and boutiques to visit.  Before we knew it, the weather report was saying “Now or next week,” and we needed to get on down island.  Next season we will return to Les Saintes and continue our exploration. We departed at 09h00 on the 9th and banged along in 5’-7’ seas, with 20kn on the beam (this is getting to be a recurring theme).  Since I hadn’t been in the mood to fuss with it, (and frankly, I was stumped.  Theoretically, it’s not possible for the raw water pump for the oil cooler to get air-locked, as it’s all below the water line.  Our guru, Scotty is stumped too) the oil cooler overheated twice.  As we arrived in the mooring field outside Portsmouth, Dominica we were met by Anthony, who grabbed our lines and helped us with a mooring.  Portsmouth is interesting, as the mooring balls are owned by individuals that have banded together to form P.A.Y.S. (Portsmouth Area Yacht Services).  This move, they believe, has reduced competition for, and raised the level of service to visiting yachties.  It worked for us.  We contacted Jeffrey (aka “Seabird”) for our ball, as he is the current president of PAYS.  Clearing Customs was not as easy as the French islands, and not nearly as convoluted as Antigua, but Suz got the job done easily after we finally found the office at a pier a mile or so away.  Jeffrey arranged a driver and minivan for us the next day, and we spent 6 hours touring the island with 6 new friends (from a sailboat near us).  Winston, our driver, was extremely knowledgeable about the flora of the island, and as we wound our way up a mountain road no wider than a driveway in the U.S., he would stop periodically to show us various plants.  (Even though Dominica is an extremely poor island, the soil is very rich, and agriculture combined with bounty from the sea keep people from going hungry.  What’s incredible to me is that the government is EXTREMELY aware that the island’s natural resources are its’ main saleable commodity.  The environmental regulations to protect these resources are very strict, and the population is very proud of their island.)  Near the top of the mountain, we hopped out of the van, hiked across some garden plots and up a stream to Syndicate Falls, beautifully situated in the rain forest.  It was cloudy, drizzly, and a little cool for the troops, but I’ll be darned if I was going to walk all that way and not swim in the pool at the bottom of the falls.  I dropped my shorts, pulled on my bathing suit, and was in the water for a dip and a quick picture.  Winston regaled us with the history of the island, and anecdotes from local life as we drove back along the shore road.  The tour was over way too quickly.  Back at the Seabird base, Jeffrey informed us that he had been in contact with the principal of the school, and that she’d like to meet us the next day.  (We had brought a few bags of school supplies to drop off for the kids here.)   We enjoyed an early dinner with our new minibus friends from s/v “Jalapeno” at the Purple Turtle restaurant nearby.  The next morning, Anthony picked us up in his panga for an early morning trip up the Indian River which runs through Mangrove swamps and lowlands after originating high above us in the mountains.  Per environmental regulations, no gas engines are allowed on the river, and you must go with a guide.  At that time of day, we were the only boat on the river.  The water abounded with fish.  Birds in the impenetrable forest surrounding us were waking up, and exercising their voices.  High up in the branches, iguanas gathered warmth from the rising sun.  We passed by Calypso’s house (scenes from Pirates of the Caribbean were filmed in Dominica) on the muddy bank, then tied up to a ramshackle dock.  After scrambling to shore, Anthony led us on a short hike onto high ground, where we passed several shacks with their associated garden plots-kids and dogs playing outside.  Goats were tied here and there amidst the scrub.  The crops that we saw on both of our tours included: mango, papaya, passion fruit, cashews, almonds, pineapple, bananas, lettuce, cabbage, potatoes, yams, dasheen, star fruit, cacao(chocolate)and coffee,etc.

When we returned to base, Jeffrey was ready to take us to the school, where we met Ms. Peter, the principal.  She was thankful for the stuff that we brought, and we had a conversation about some more substantial things that were needed.  We agreed to stay in touch until our return.  (We’ll be back with some A/V equipment next year.)  Jeffrey drove us to Customs, Anthony took us back to the boat, and we were off to Rouseau, the capital city on the south end of the island.  It’s said that the harbor at Rouseau is not the safest for visiting boaters because of crime there.  Anthony had recommended that we contact “Seacat”, who had some moorings in a Bight just south of town, and that he would take good care of us.  As we rounded the point, we called on the VHF, and his guy came out in a panga to guide us to a mooring ball.  He recommended that we give Marcus, hovering nearby in another panga, a tip, as he was in charge of security for the mooring field. Hey, when in Rome…  Seacat’s man asked if we were interested in any tours ashore.  There were plenty of things that we wanted to see, but we had cleared out of the country at Customs, and planned to stay on the boat under the yellow “quarantine” flag before moving on in the morning, figuring that we’d go ashore in the Fall on our way up.  He says: “You’re Seacat’s guests now, no one’s going to bother you.”  No rest for the wicked.  We told him to come back to fetch us in 15 minutes.  We got the flopperstoppers down, as it was really rollin’, buttoned up the boat, and headed to shore when he returned for us.  We landed at a dock that looked like it had been built from discarded lumber and driftwood.  At the end of the dock, sitting on makeshift stools next to the seawall, and sheltered by a rusty corrugated sheet metal roof, sat a group of Rastas smoking ganja.  Our driver introduces us to Seacat.  As I shake his hand, and make eye contact with his nowhiteallbloodshot eyes, I’m thinkin “Your lilly-white behind is a long way from Kansas, dude.”  One thing led to another, and he asked us if we wanted to go up to Trafalgar Falls (That’s what we really wanted to do, but it was getting late in the day).  I said yes, and asked him how much.  He wouldn’t say.  I asked him 3 different ways, and with this sly, sh&$-eatin’ grin, he replied that we’d go on the trip, and we could pay him what we thought it was worth at the end.  Discomfort level rising.  I glanced to Suzanne, and she gave me that “in for a penny, in for a pound” look and we were off.  Well…….looks can be deceiving.  He asked if it was okay with us if this young man (looked to be about high school age) could come with us.  We said “Sure.”  Over the next few hours, we discovered that S.C was mentoring this kid in the ways of entrepreneurship, trying to keep him away from the heavy drugs and violence that are becoming part of the young male culture here.  In S.C., we witnessed a gentle, but firm teacher.  As we wound up into the mountains, we stopped at a cliff overlooking the city of Rouseau, and watched the Pakistan-Dominica cricket game being played in the stadium far below.  He stopped the car every few minutes to pick and identify a flower or fruit growing by the roadside for us.

Standing on the observation platform, looking up at the base of the falls some 200 feet above us, he asked: “Do you want to go swimming?”  Oh Yeah!  Forty minutes later, after scrambling over and around algae-covered rocks the size of minibuses, and thru raging torrents of water, we were twenty feet below the pool, huddled against a sulfur-colored, rock face that was almost too hot to touch, under the cascading water.  The last twenty feet was a straight up scramble over slippery rocks, with water gushing over completely obscured footholds.  Not having a good supply of Xanax, nor wanting to convalesce in a third-world hospital, we called it good.  After we got back to the van, he related that he was the only guide that took guests into the river.  As we wound down the mountain, we stopped at several springs, where boiling water gushed out of the ground, fired by the magma below and feeding warm sulfur-laden streams.  Of course, we had to see Rouseau, so we headed into town, where the cricket game had just ended.  The streets were jammed with pedestrians.  As we edged through the throngs, it seemed that every other person knew Seacat.  He told Suzanne “Yeah, I’m the unelected Mayor.”  Well Ollie, it just goes to show that you can’t judge a book by its’ cover.  This guy,that we weren’t so sure about ended up to be a straight-up good guy.  He was very knowledgeable, was great with the young man that accompanied us, and a perfect host.  (He wasn’t a bad businessman, either.  We probably paid him more that he would have quoted the tour.)  As the sun fell lower and we worked our way out to the dock for a ride back to the Girl, the guys previously hangin’ out were hard at work cleaning a couple of bushel baskets full of Red Snappers.  This ain’t Kansas, but who says Kansans have a corner on the “Right Way?”