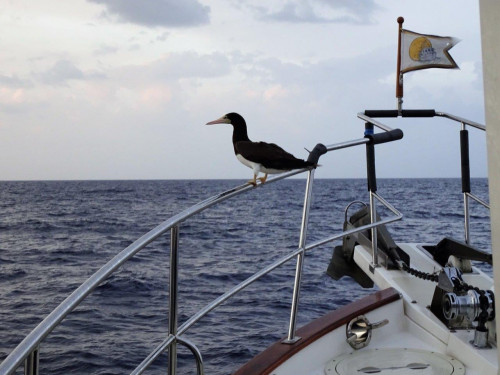 Running up the “Yucatan Deep”, Alizann continued to pick up speed as the current and South wind pushed her along.  We were making 8-9 knots instead of our usual 7.  The seas remained kind, rarely running more than 4 feet.  The weather forecast that we had done pre-trip remained spot on.  Ken and Ron kept feeding us daily updates confirming that we were good for the next day or so.  Suzanne discovered that we had no running water one night as she was fixing dinner.  We had full tanks, so I checked the water pump and it was hotter than a firecracker.  @#%$!!!  Well….after noodling the problem for a bit, I figured that I could plumb the anchor washdown pump that I had in spare parts into the system and make do.  (Why didn’t I have a spare potable water pressure pump?  The aforementioned hot pump WAS the spare.  We have replaced no less than 5 of these $1K a pop pieces of junk since Alizann was birthed.)  Needless to say, we’ll look for a different solution in the next iteration.

We had a hitchhiker for an overnight.  Around dusk one day, a Brown Booby found a comfortable perch on our anchor pulpit and stayed with us until the next morning.  He was very persistent.  We shoo’d him off several times, but he’d circle around and be back in his spot before we got back to the helm.  We also had an escort of dolphins every day, playing in our bow wave weaving back and forth, each one taking a “turn.”  Speaking of escorts, a United States Coast Guard ship paralleled us for a few miles way off the coast of Belize.  (This isn’t as far south as they go; we’ve also seen the USCG in Panama.)  Guess we didn’t look like drug smugglers.

Rounding the west end of Cuba, we stayed in the International shipping channel which allowed us to pass inside of the 12-mile territorial limit.  Couldn’t see land, as that end of Cuba is low and marshy.  Once in the Florida Straits, we felt like we were home free, even though we were still a day-and-a-half from landfall in Fort Pierce.  As “they” say, “All good things must pass” Suzanne woke me up when we were around 40 miles south of Key West.  She was seeing lightning along the horizon for 360 degrees, and the radar showed that we were in a slot between big red blobs (thunderstorms).  We tried to stay between the storms, but it’s tough to outrun a storm when you’re doing 8 knots!  Then we were in it.  Continuous lightning illuminated the angry seas.  White water was breaking OVER our pilothouse, and the rain came own in Biblical proportions.  As the 50+ knot winds clocked through 360 degrees, we did our best to keep the Girl’s bow into the wind.  All the while, the radar screen is completely red, and we have no hope of keeping track of that catamaran that has been dogging us for the past 4 hours, sometimes getting so close that Suzanne had to admonish him to give us some sea room.  (We found out later that he had unplugged his AIS for fear of a lightning strike!??)  45 minutes seemed like an eternity and the storms were gone.  The skies cleared around us, and the lightning was now distant.

When dawn broke, we saw land for the first time in 8 days, the seas were 3-5’ out of the south, and the wind had picked up to the high teens as we headed up the east coast of Florida.  Checking in with Immigration was a breeze.  We used their new App, CBP Roam and filled out our forms online.  Two minutes later, we got a telephone call from an officer and after a couple of quick questions, it was “Welcome home”.  On our weather radar, we watched the thunderstorms forming, then marching across the state.  When we realized that we’d probably get bashed by another one, we ducked into the Lake Worth Inlet.  We got a slip at Safe Harbor Marina in North Palm Beach, and got tied up just before the skies opened up.  Two adult beverages and eight hours of sleep later, we were ready to see what post-Covid Florida looked like.  Guess we can talk about that…