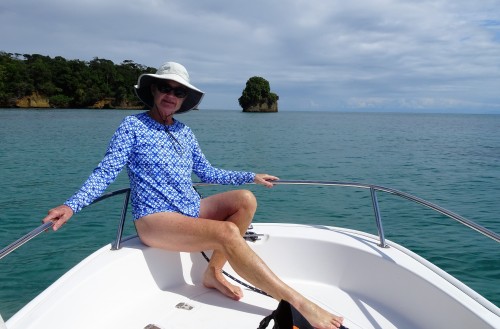 ……2 foot seas are better than 4 foot seas-we waited until Sunday to leave Shelter Bay.  We pulled out of the marina and anchored in the “Flats,” the anchorage outside the Canal.  We figured that we’d have a bit of growth on the bottom after the Girl had been sitting in the marina for 5 weeks.  Getting into the water in the marina with the resident alligator (around an 8-footer) didn’t seem prudent.  “A bit of growth” was an understatement.   An hour-and-a-half later, Alizann’s bottom was pretty clean.  Boy, did we take it on the nose from the top-dollar guy that we brought over from Panama City last Fall to do our bottom paint. Live ‘n learn.  We figured that our 16h00 departure would put us at Escudo Veraguas a bit after daylight.  Cruising into the setting sun, 2’ seas and spaghetti for dinner?  For me, it doesn’t get much better.  Neither of us slept well.  Maybe it was the slow roll of small swells-who knows?  Even though we were 10 or 12 miles offshore, we banged through a patch of trash washing out to sea from the mouth of a river.  I was about ready to move us further offshore when the water cleared.  We arrived at Escudo Veraguas, dropped the hook in the lee of the island and crashed until 13h00.  Although it’s a fairly large island, only 4 families live on Escudo (Shield).  We spent the afternoon dinghying up and down the southern coast, exploring the isolated beaches and hidey holes.  There was a bit of swell wrapping around the island, so we decided to limit our visit to one nights’ duration.

Next stop was Cayo de Agua.  Again, this wasn’t much of an anchorage, just a shallow spot tucked up next to shore.  With the settled weather predicted to hang around for a few more days, we figured anchoring here would work out fine.  There were a half dozen completely remote beaches on the north side of the island, and we wanted to check them out.  Normally, they’d be pretty windy/wavy, but this week they were just serene.  If we were sun worshippers, any one of the beaches would be ideal for hanging out.  Instead, we took most of them in on a dinghy drive-by, stopping at one for an hour dip.  The next day was a wash out (literally).  It misted and rained all day long.  Unmotivated, we both lazed around on the back porch most of the day and read.  Not to be denied, Alizann got some of our attention.  The watermaker’s high pressure alarm was yelling at us and the unit shut itself down.  I had a pretty good idea what this was all about.  Over the past months, our water production had been steadily declining.  We were living on borrowed time, as our membranes were 9 years old (normal life span on a pleasure boat-around 5-6 yrs.).  Of course, I didn’t have spares onboard.  They have a finite shelf life, and are about one boat unit ($1K) apiece.  Well…..I did have chemicals to acid, then to alkali wash them.  While recirculating the solutions through the unit from a 5-gallon bucket, Suzanne kept them hot by microwaving them a quart at a time.  We’re making water now, but only 18 gallons/ hour, not the 30 that our machine is rated.  I’m hoping that we can limp along like this until the Fall.  Showers will be at a premium.

The mist subsided and the sun came out, so it was time to move it.  We were kinda undecided as to where when a WhatsApp came in from Judy and Rick at Tranquillo Place.  “I heard you on the net.  Are you coming to visit?”  That settled it.  We had a nice day catching up on events and got a chance to check out the progress on the house that they’re building.  Listening to the daily cruiser’s net, we realized that the Super Bowl was coming up this weekend.  The Point restaurant at Red Frog has a 16’ projection screen on the beach and had a Super Bowl party planned.  ‘Nuff said.  I called my buddy, Chelsea at Red Frog, and she got us in “to your old slip.”

“What do you do all day?  Eat bon-bons and drink umbrella drinks?”  Nope.  We got up yesterday, grabbed the heat gun, putty knives and sander and stripped off about 18 (no exaggeration) coats of varnish and epoxy, going down to bare wood on the portion of the caprail on the port side of the salon.  It’s always been a problem area and was getting pretty ratty looking, with water getting under the coating.  Since we were side-to on a long dock, it was a perfect time to get to it.  The cloudy skies helped keep the temperature down to 80 degrees.  Perfect weather for heat-gunning.  Got a coat of varnish on before heading over to the Point for dinner.  The Admiral’s day was complete.  We spotted a tree sloth on our way over.  Chris, the manager caught us up on all the Red Frog scuttlebutt.  We also met his new right hand, Ricardo, replacing my girlfriend Jelly who had departed for Isla Colon around Christmas.  We got home after dark, but were not deterred.  Suz held the light, while I got another coat of varnish on.  I woke up at 03h00 to heavy gusts of wind.  Seconds later, true to the forecast the skies opened up.  …….and, it was a PANAMA rain!  When it stopped at 05h00, I headed out to dry off the rail.  As soon as I got back to bed, another gully-washer started.  It’s almost noon.  It’s been raining off ‘n on all morning.  The varnish has some foggy spots in it, but experience tells us that they will probably resolve after we get a good, dry day.  There’s more, but I’ll bore you with that…..