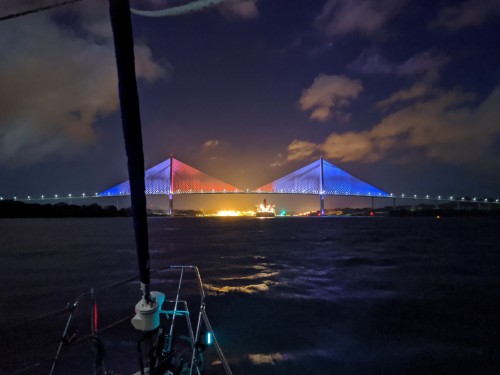 So…we met a nice couple and their two kids at the pool one evening.  One thing led to another, and before we knew it, we were signed on as crew to help them transit the Canal.

James, Jess and their 2 girls, Maren (12yrs.) and Kaia (7yrs.) are taking a couple years off from their jobs as surgeon, nurse practitioner and kids to travel just as far as they can get on their sailboat “Soteria,” a 54’ Amel Super Maramu.

Our adventure began on a Wednesday at noon.  We arrived at “Soteria,” and greeted Christian and Izzy (Crew from “Roald Amundsen”) who would also be helping with lines.  We stowed our gear-not much, just a couple pairs of shorts, tee shirts work gloves and inflatable life preservers, and headed out to the anchorage in the flats past Shelter Bay’s channel.  The plan was to anchor and wait for our agent to arrive at 14h30.  Even though we were inside the breakwall, the high winds and seas made getting the hook to set a bit of a challenge. 14h30 came and went.  Michael called the agent.  Change of plan.  He would now arrive at 17h30.  We bobbed around and shared stories for a few hours, and Jess served up a couple of lasagna dishes-one vegetarian and one with meat.  It was the harbinger of the cuisine quality for the rest of the trip.  Two days of full like you’re full over Thanksgiving.  The agent finally arrived just around dark and gave us instructions.  We would be rafting up with 2 other boats, a catamaran and another monohull when locking through.  In the locks, we would always accompany a freighter.  So, the procedure was as follows:  In the fairway outside a lock, the three boats would raft up and proceed into the lock as one.  In our case, the catamaran was in the middle between the 2 monohulls.  Upon exiting a lock, we would break up the raft and proceed individually to the next one.  Repeat until the Pacific Ocean.  No worries.  Suzanne and I had played this game before.  For James and Jess?  No prior experience with rafting OR locks.  Understandably, a little trepidation.  Especially,since it was now dark.  Where was I?  Oh yeah.  We now have the anchor up, and we’re proceeding under the  brightly lit new Atlantic Bridge approaching the fairway to the Gatun Lock.  The freighter that we’ll follow into the lock is ahead of us and joined by a tug.  Then it stops.  Or does it?  It’s a half mile ahead of us and hard to tell.  Meanwhile our agent gets off his radio and tells James to just tread water for a bit in the wind and current.  The 2 other pleasure boats with us are doing the same.  Two other tugboats join the freighter ahead.  What the heck?  After 40 minutes or so of this, our agent, Ricardo tells us that the Captain of the freighter and the tugboat captains are having a little discussion.  The freighter needed 3 tugs to guide it into the lock-not unusual.  When only 1 arrived, the freighter had to drop anchor in the fairway to the lock.  Again, no big deal.  The other 2 tugs arrived, and the freighter hauled anchor.  Big deal!  He had hooked a cable on the sea bottom and it had fouled his anchor.  Now the Captains are arguing about whether or not the cable has cleared.  Freighter says “No,” tug Captain says “Yes.”  I looked at my watch when we finally entered the lock.  22h06.  Locking proceeded without incident.  The French catamaran in the middle was responsible for propelling and steering our raft, and he did a great job.  After locking up to Lake Gatun, we motored to a huge mooring buoy, rafted up with our catamaran pal and cracked a beer at 00h40.  Our agent left, and informed us that our next agent would join us at 07h30, expecting to leave immediately.  The next morning, as we motored across Lake Gatun, Jess indulged us with breakfast burritos-eggs, cheese, potatoes, sausage, bacon, salsa-you get the picture.  Suz and I split one.  It was a beautiful sunny day with a light breeze, so the twenty or so miles across the lake was a real treat.  We encountered many commercial vessels coming and going through the canal as they travel at a much higher speed than we.  Just before we entered the Culebra Cut, the narrowest portion of the Canal, we were instructed to pull to the side and wait.  A propane tanker was just exiting the lock several miles ahead of us and coming our way.  At current speeds, we would pass them in the Cut.  The width (or lack of it) in the cut would preclude us from maintaining the requisite separation from the floating bomb, so we needed to wait for him to pass by us before we proceeded on.  Homemade pizza and beautiful weather and scenery eased our pain.  We entered the Pedro Miguel lock and had to wait 40 minutes for the freighter behind us to arrive.  Suz WhatsApped our driver, Olmedo who was to meet us at the Balboa Yacht Club on the Panama City end of the Canal.  James grabbed a mooring ball at the yacht club (and I use that term yacht club VERY loosely).  We had a teary goodbye from the kids (I don’t think that they thought we were leaving) and a heartfelt “Thanks” from Jess and James.  (They said that our presence calmed them and they were able to enjoy the experience-Go figure!).  Anyway, I think that the Admiral and I got the better end of the deal.  We were able to spend a couple days with a truly delightful family.

True to form, when the launch brought us to shore Olmedo was waiting.  I think that we were home by 22h00, truly whipped.