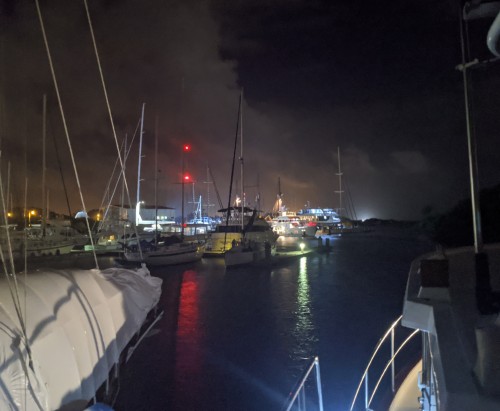 Christmas flew by in a blur.  We got a chance to see our kids and grandkids, as well as most of Suzanne’s family.  The exceptions were Suzanne’s brother’s gang, who were welcoming Suzanne’s Mom’s newest great-grandchild into the world.  Jeremy, our eldest, and his wife Jodi also informed the fam that they’d be welcoming in a new great-grandbaby in July of 2020.

The flight back to Panama was uneventful once we got on the plane.  It was a good thing that we got to the airport good and early.  Panama (and some other countries as well) doesn’t like folks flying in without a ticket out.  If you arrive in Panama and Immigration does not allow you in, it’s the airline’s responsibility to fly you back out.  Needless to say, that costs the airlines money, and therein lies the rub.  We didn’t have a plane ticket out of Panama.  This wasn’t our first rodeo, and before we left Panama, we had the marina draft a letter stating that we had a boat there (our way out of Panama).  Suzanne had our vessel’s Coast Guard documentation and Panama cruising Permit, so we were covered.  Trouble was that neither the gate agent nor his supervisor knew how to handle us.  After several calls up the chain of command, they ended up with the U.S. Consulate, who helped sort things out.

Next choke point.  Panama Customs.  We had one-and-a-half duffel bags full of clothes packed into 4 duffel bags.  The rest was filled with boat parts.  The ladies at the x-ray machines eyes lit up when our bags passed through.  Over to the Customs office.  Nope, we weren’t going to be able to get our stuff through at this late hour.  We’d have to leave it and come back tomorrow (Okay, that’s a $240 roundtrip cab ride), and pay for an agent to deliver the goods to our boat.  KaChing!  Forty minutes later, the officer basically shook his head and told us to get outta there and never do this again.  This is a story in and of itself, but I won’t belabor it in order to protect the innocent.

Remote battery monitor and shunt on the Lithium Batteries-Installed

LED lighting throughout the boat-Upgraded

Wheeled and waxed all fiberglass from caprail up

Rubbed out and polished all stainless steel

It wasn’t like we had anywhere to go.  The winds were consistent at over 25 knots, with seas ranging from 8’-17’ for nearly 2 weeks straight.  The good news was that until 2 days ago we didn’t have any rain.  We got some good hiking in, including a twenty-something kilometer jaunt over to Fort San Lorenzo.  Lotsa Toucans, Monkeys, mammals and assorted other birds.  We also acted as the net controllers for the Shelter Bay Cruisers Net on the VHF for several days.  Suzanne did the weather and I handled the rest.  (Many locations have “cruiser’s nets” every morning.  They cover anything from local services and events, announcements, alerts, and general communication between cruisers in the area).  Suzanne and I also hosted a “Movie night” in the lounge here at Shelter Bay.  We screened a first-run movie on the flat screen, attended by 20 or so other cruisers.  Our days usually end with a dip in the pool, Suzanne heading to the “Aquafit” class and me heading to a lounge chair for some reading.  There are plenty of activities here.  The cruiser’s potluck on Sunday evening showcases some significant cooking talents.  Monday morning’s nature walks always features some impressive animal sightings.  Carlos, a local amateur historian has given a few nice seminars in the evening, as well as walks around the abandoned U.S. military base here.  Along with an all-day trip to Panama City, and a bus ride to Colon, we kept pretty busy.

The” Roald Amundsen”, a square rigger was docked here at the marina.  It’s a sailing ship built in the 1950’s sometime.  It’s owned by a private foundation in Germany and in the 5 months that it doesn’t have a crew of high school aged students on board, it takes on charter guests.  The kids left on an overland trip to Costa Rica and when the boat was between semi-permanent crews, the captain gave us a tour.  It was fascinating.

We did a canal transit, acting as line handlers for a family of four as they made their way to the Pacific.  I think that in the interest of brevity, I’ll do that passage in a separate entry.

So…. It’s been raining for 2 days now, but the good news is that it is signaling the passage of a cold front, and the high-pressure system over the northeastern part of the Caribbean is dissipating.  The permanent Low off the coast of Colombia will also shrink in size over the next few days, making for good passage making conditions throughout the western Caribbean.  It’s come none too early.  I’m feelin’ the urge to move, and I’m no fun when feeling caged.  Our plan is to leave Shelter Bay on Saturday (the 25th), traveling for 15 hours to Escudo de Veraguas, a small island around 20 miles off the coast of Panama.  We’ll stay there and snorkel and explore for a day or two until the weather chases us onward to Bocas del Toro.  Until then…..