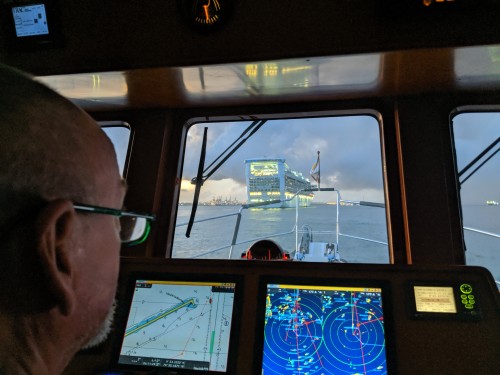 HiYa!  (this is a Gringo marina)

Britt, Sandy and their boat guest, John (her cousin) came to Red Frog to visit us when we returned.  Our goal:  Red Frog Beach on the other side of the island.  The plan was to do some body-boarding and hit as many beach bars as possible.  The surf was up.  The red (danger) flag was cracking in the stiff wind.  Plan A accomplished.  Plan B-Not so much.  It was Mother’s day.  Well, not completely true.  It was the day after Mother’s day.  By now, you are well-acquainted with our Central American friends’ affinity for holidays, errr should I say “days off work to party?”  All the bars were closed.  No worries, we were all the healthier for it.  On the walk back over the island, Sandy spotted a couple of small crocodiles sunning themselves in a creek.  Suzanne, always on the lookout for the ever-elusive but very colorful poison dart frogs took us up another rill (who says crossword puzzles are a waste of time?) where we spotted and photo’d some Red Frogs.  They’re teeny (about the size of the nail on your big toe).  You’d think that they would be easy to see, but they hang out in the leaf detritus on the ground where fallen wild cinnamon petals (they’re red and pink) are mixed in.

Time to whine, and I’m sure that you’re shedding huge crocodile tears for us.  The aforementioned nav computer that the Admiral repaired now has another affliction.  He works perfectly until he doesn’t.  For the past few times underway, he has been shutting down without any advance notice.  It may be 10 minutes or 3 hours, but once he turns off, you can’t restart him.  The gurus have no idea.  “We’ve never seen that before!”  So…….we got the second “Black Box” stored under the helm (thanks, Roberto and Maria).  Suz spends the next 2 days in computer Purgatory with multiple techs and Scotty getting it set up for our boat.  Oh yeah, there are proprietary charts that are licensed only to us on our unit and yada yada yada.  That’s her problemo. Mine is MUCH more important.

When heading into Bocas on the dink, I heard a “clunk.”  Everything was working great, so check it when I get home.  Won’t bore you with the details, but the hydraulic ram for the trim/tilt broke off and then jammed itself in a very uncomfortable spot.  Translation: You can’t get there from here.  While Suzanne spent 2 days on the phone and in microswitches, I spent my time with a 4# sledge, a gear puller, torch and chain.  Suz had partial success, I had none.  All of the bits and bobs that I needed to remove were welded solid by the combination of salt water and time.  Ten hours, no joy.  That was pretty much the rest of our Red Frog stay.  We headed to Rick and Judy’s place on Friday, as she had the replacement sunshades for our upper deck finished, and we had a weather window to transit to Colon on Saturday.  At Rick’s, we pulled the motor off the dink so I could cut the offending pieces off the outboard without spitting metal shavings all over Alizann’s deck (and rusting in the future).  My angle grinder and ½” stainless steel pivots made quite a mess, but in the end, we won.  I’ll apply a few pesos and utilize FedEx while back in the good ole U.S.A., and life will again be good.

(Private message for my Dearest Mother-in-Law: “Casey, stop here.  This is a long one.  Resume at a later time.:)

The weather on Saturday morning was beautiful.  What a day to be leaving.  We hung out and did boat chores until 12h45, then took a slow ride out through the Crawl Cay canal, exiting the Bocas.

What a night!  First of all, “Catholic Casserole” for dinner.  You know the one- Mac, cheese, ground beef, green peppers, tomato sauce.  I’m such a cheap date.  Feed me anything with pasta and tomato sauce, and I’m in hog heaven.  Suz was feelin’ a little “urpy” with the 4’-6’ swells (with a fair amount of 8’s) off the port bow, so we were happy that she had a sticktoyourribser premade.  She hit the sack at 18h00 and it was just me and the sea.  That afternoon, the Admiral had commented on the lack of dolphin sightings while underway on this trip.  As darkness fell, I heard the familiar snort, blow, slap and splash out of BOTH of the pilothouse doors.  Hearing that noise from the side is unusual at all.  The dolphins usually swim in groups of 4-6, and usually just play in the bow wave.  In the dark, you rarely are sure that they’re there-you just kinda sense them.  Well… the reason that they were heard alongside is that there were so many of them.  My guess is more than 20.  They were taking turns in the bow wave, then peeling off, only to race up on our stern quarter (s) to keep pace next to the boat until their next turn at the bow.  How did I see them when they peeled off and swam around to the stern if it was dark, you say?  The next part is that the water was filled with bioluminescent plankton.  When they’re disturbed, they light up.  The dolphins looked like they had “vapor trails” streaming off their fins, extending 10-15’ behind them ghosting through the water when out of the cone of illumination cast by our steaming light.  They’re usually here and gone, but this pod kept pace with Alizann for 33 minutes.  (I had just made a log entry, so I know).  Just before the moon rose (nearly full) like a big orange ball off our bow, I caught a meteorite about a finger’s width above the north horizon.  It was one of those that seemed to linger a bit longer than most.  I didn’t see another boat for the rest of my watch, and the radio was dead silent.  My only other excitement was a rain squall that I watched develop on the radar, only to skirt around 2 miles away from us.  Suz got up around 01h45 feeling much better, and I caught a few winks until we entered the Atlantic anchorage outside the Canal around 05h20.  Nearing the opening in the breakwater, we fell in behind the “Caribbean Princess” a small cruise ship, and followed her in.  So much for advance planning, I figured that worst case scenario, averaging 5.5 knots, we’d make it to Colon before nightfall.  Best case, 7.0 knots-in by lunchtime.  At 2/3 throttle, we averaged almost 8.5 knots against the wind and swell!!  Guess we had a good push from current.  Suzanne’s changeout on the Nav computer worked as she planned.  Radar and chartplotter were flawless, she’ll mess with getting the depth data integrated before our next trip.  We’re here at Shelter Bay Marina and it’s hot and humid.  Looks like we’ll get some “liquid sunshine” today, as the clouds are already building at 07h30.

Pretty sure that this’ll be my last report this year unless something really remarkable happens between now and the 18th.  We’ll fly back to the States then to be with family for Christmas.

Mike and Sue (From our Lost City trek) just stopped in.  We’ll do some catching up in the next day or two.

Dang!  One of the hazards of not posting right away.  We went for a nature walk yesterday.  Saw a plethora of tropical birds, including a Toucan.  A troupe of Capuchin monkeys, and an Agouti, as well as a bunch of brightly colored butterflies.

Leaving tomorrow at 05h00.  Imagine that this is REALLY it until I…