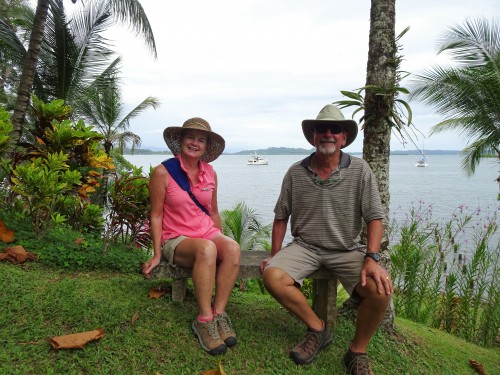 Well…..Bocas Town is an anchorage of convenience-not preference.  No wastewater treatment facility-ALL of the drains empty right into the bay.  We don’t make water, we don’t swim here.  It’ll be our stop for provisioning and internet (Thank you, Golden Grill restaurant).  We had exhausted our shore explorations after dinghying (sp?) over to Lost Boys Blues Bar and Cosmic Crab on Cayo Carnero.  At the Crab, the food was good the connectivity terrible.  Another restaurant/bar owned by U.S. expats holding on by the skin of their teeth.  What’d Jimmy Buffett say?  “Runnin’ from something”?   Anyway, the Girl was talkin’ to us.  ”Get me outta here!”  Suz had heard about a little organic Cacao farm in Laguna Porras (Dolphin Lagoon), and had been in contact with the owner, Julie.  Sounded like a good destination, so we were off, but not before informing David and Donna, aboard “Exit Only” with their son Dave, his wife Sarah and their two kids Zoey and Jocelyn.  Oh yeah, they’re sailing around the world, heading through the Canal as soon as their long-term visas for French Polynesia are in order.  It’ll be their second time around, as their first was when Dave and his sister were kids.

Our visit to Green Acres Farm was the highlight of our Fall cruising so far.  Julie had given Suz the latitude/longitude of the farm.  Although kinda unusual, they made locating Green Acres easy.  When we arrived in the bay, it made sense.  No roads, no town, vague landmarks.  As we studied the place through binoculars from the anchorage, we were amazed at the level of “tidy” that we saw.  Manicured lawn between neatly trimmed bushes, orderly rows of trees and multiple flowering gardens connected by stone-lined footpaths surrounded the 2-story house.  Quite a contrast with so many properties barely holding back the rain forest.  I thought the guy must’ve been a retired dentist or accountant.  Robert, Julie’s husband IS a retired dentist.  They sailed here (That explains the lat/lon directions) around 6 years ago and decided to find some property.  A couple of years on shore was what they were looking for.  Well….two became three, became four, became….  They knew nothing about making chocolate, but hired a local guy to give them a crash course.  There were a thousand or so Cacao trees on the property planted by United fruit years ago, so there was lots of raw material.  The lady that owned the property before them was an avid gardener, thus the lush gardens around the house.  The farm is completely off the grid.  There is no road, nor electricity coming in.  The place is only accessible by boat.  All of their power is supplied by solar panels supplemented by a small generator.  Propane supplies the heat for cooking/chocolate-making.  Robert took us on a walking tour of the farm which lasted around 3 ½ hours.  As you might imagine, he is quite the expert on the local flora and fauna.  The chocolate making?  There isn’t a “season” for cacao.  The trees constantly produce fruit.  Even with 30% of his crop lost to insects and fungus (No pesticides or chemicals are used), that’s still a lot of fruit to pick and process.  Three indigenous guys help with the harvesting and processing.  The processing?  Let me just say that McGyver has nothing on Robert.  He has designed and built all of the equipment that he uses to make chocolate.  I can’t begin to describe the ingenuity it took to create his “factory”, all contained in a 10’x10’ shed.  Just check out the pictures.  When our tour was over, we sampled some of Robert’s chocolate rum mixed with sweetened condensed milk and matched with Julie’s brownies fresh from the oven.  The farm will be changing hands soon, as it’s been sold to a non-profit, Planet Rehab, owned by a couple of guys from the States.  They are planning to maintain the status quo.  R & J came out to the Girl in the evening to share sips and conversation.  Their boat is being refitted, and they plan to resume their cruising after a trip back to the States over the Holidays.  We may see them again, as they will be visiting the San Blas and plan to transit the Canal at about the same time as us in a few years.

Why don’t we make more short and long term plans?  Julie and Robert invited us to a surprise birthday party for their 90-year-old neighbor at “Rana Azul,” a restaurant over in the next bay for the next night.  They told us that the owners, a couple from Luxemburg had a bonafide pizza oven.  All right then, we were in.  We told the crew from “Exit only ” and everyone was psyched for pizza.  We led the way through an uncharted cut to the next bay-Robert assured us that there was plenty of water (and there was).  We dropped anchor in 20’ of water outside the reef, as there was no visibility on this cloudy, rainy windy day.  It was so cloudy, windy, rainy that the party was postponed, as guests were coming from miles around.  Well…Suz and I dinghied in to see about food.  We met Mark, the owner, who informed us that it was “Chicken Night.” Okay, back out to “Exit Only.”  They were set on pizza, and we were in a spot where the wind would blow us into shore if an anchor dragged, so they voted to go somewhere else to anchor.  I went back to tell Mark that we’d come another day, and he told me that they had set a fire in the oven and made dough.  Back to the Girl to pick up Suzanne, and got soaked for a second time beating against the wind and waves.  Suz had called “E O” and they were headed back to re-anchor.  The pizza was great, the beer was cold, and we made some new friends amongst the gang of expats who hang out here.  Participating in the Bocas Emergency Network on the VHF the next morning got Suzanne a new pal.  BEN 13, AKA Captain Ray gave her the coordinates for waypoints leading through the reef near Rana Azul.  It was cloudy, but the wind had abated during the night.  We tiptoed through the reef, and found ourselves in 16’ of calm water right near the restaurant.  Good for future reference.

Suz had heard about a spot amongst the mangroves where there were like a Jillion sea anemones in many different colors.  Exit and we were off to explore.  We got anchored, and did some snorkeling, but were in the wrong spot.  “Exit” checked a spot where a day charter had been anchored earlier and reported a trove of these invertebrates.  Then the sky opened up.  Next morning, the blustery weather continued, so Suz and I decided to head back to Rana Azul and anchor within range of their WiFi router so that we could get some work done.  We followed Cap’n Ray’s course through the reef and dropped the hook in 16’ of water just off the mangrove-shrouded shore.  Suz got some bills paid while I resumed the never-ending task of keeping a coat of wax on Alizann.  We headed in for the rescheduled party and spent most of the evening with Dave and Shellie, whom we had met during our last visit.  Dave and she bought 27 acres on the next bay, and were subdividing it into lots for sale.  I guess there is a HGTV show, Caribbean Life that they were featured in. In the meantime, they had built a “floating house”, and were living the life.  After a few games of pool (Mark has a regulation slate table in his open-air restaurant.  He was a ranked player in Europe before cruising to Panama), Dave looks at Shellie “Did you ask them?”  “No.  Didn’t you while I was in the bathroom?” “No.”  After a night of fun, I wasn’t sure what was coming.  “We have to go back to the States for a couple of weeks in early December.  Would you consider bringing your boat over to our house and house-sitting for us?  We have a 60” TV, hot shower, full kitchen and internet.”  (We’re planning to take a trip up into the mountains and staying for a few days in Boquete at that time, but it’s tempting-Suz and I will have to noodle this one out before we get back to them)

Okay, well it’s been crappy all day after pouring all night, so we’ve been hunkered down leeching Mark and Sydney’s internet (They gave us permission to use it).  It’s been off and on rain most of the day, so I’m still in my boxers cruising the interweb and tapping out this missive.  God bless Suzanne’s sister, Sheila.  She has no idea how many spare parts and miscellaneous doodads will be coming her way before our visit at Christmas.