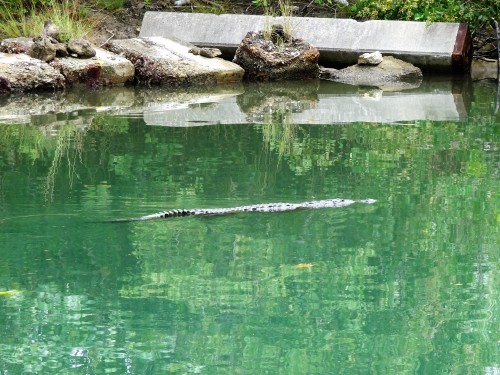 Touchdown in Panama at 20h00.  Customs was non-existent, which took a load off as we had lots of small, but expensive boat parts intermingled with our clothes in all 4 duffle bags.  Olmero was waiting out front, and we soon were off to Shelter Bay.  The new bridge over the canal had been completed in our absence, and the 2-hour trip was cut by 40 minutes.  The fact that we had arrived after the horrendous Panama City rush hour didn’t hurt either.  The sense of relief that you experience at the end of a long trip soon dissipated.  The hotel/restaurant office was closed for the night.  While Olmero got busy dialing, I checked the boaters lounge.  The A/C wasn’t working, but the couches were not occupied.  Looked like we at least had a place to sleep.  By the time that I got back to Suz, Olmero had located the hotel manager, we got our key and were good to go.

The next week was truly all work and no play.  The morning of the 1st, we checked on the Girl, who had been moved from the secure storage area (surrounded by a 12’ fence topped with razor wire, and occupied by 3 “Junkyard Dogs”) to the work yard.  Alizann had fared well.  A fair bit of mold and algae on the outside, but inside she looked and smelled sweet.  Our favorite marine tech and pal, Scotty was flying in from the States the next day, so we got things ready for an efficient visit.  All the tools and toolboxes were brought up from their homes in the engine room, bow thruster props were removed, the washer/dryer was moved to the companionway to facilitate access to the top of the stabilizers, and etc.  Earlier in the Summer, we had shipped a pallet of stuff including our new Lithium batteries from the States.  We located it in a storage bin, and spent an afternoon taking inventory and stowing our new goodies.  It was like Christmas in October.  We reestablished contact with Demaso (Recommended by a cruiser at Shelter Bay), confirming that he would start work sanding and painting Alizann’s bottom on the 4th.

Olmero picked Scotty up, he arrived just after noon, and by 1330 we were off to the races.  Stabilizers off, oil drained, seals replaced, everything cleaned and put back together by 22h00.  I won’t bore you with the details, but it was up at 06h00 and work until after dark for the next week.  Demaso arrived with his boys as scheduled, which was a relief to me, as we had wired him several boat units ($1K) before ever meeting him.  That relationship was not without drama as we went back and forth regarding materials specified, materials delivered, work quality and etc.  He didn’t speak a word of English, and Google Translate didn’t work worth squat for the local vernacular.  Scotty is a machine, fueled by Coca Cola and peanut M&M’s.  We finished the list and many other projects.  By the time he was scheduled to leave, I have to admit I was slap wore out.  We got the Girl back into the water without a lot of drama, and back to our old slip, D42.  As we were tying up we got a reminder to not swim in the marina as a 7’ Crocodile glided past.  It was so nice to move back aboard and sleep in our own bed again.    Still plenty of work to be done before heading out, but there was light at the end of the tunnel.  I put a new control module in our icemaker (found one for $80 in the home appliance parts website, whereas the boat part dudes listed the same part for around $200.  I love part numbers and the internet).  We now have ice.  Recommissioned the watermaker-it’s only making around 22 gal/hr, instead of the nearly 29 that it’s rated at.  Could be that water temperature is a factor, could be that I’ll have to put in new membranes next year.  I’ll send our specs to Spectra (our watermaker brand) and see what the techs there have to say.

The cupboards were bare, so it was time for the next adventure-provisioning.  We tried our luck on the free shuttle bus to Colon, and did pretty well at “Cuatros Alto” Mall.  The meat at the Rey supermarket looked somewhat suspect, so we limited our purchases to a few pounds.  Although Colon is the largest city on the Caribbean side of the Canal, its population is generally very poor, and the stock in the grocery store reflects this demographic.  Our friend, and long-term inhabitant of Shelter Bay Marina (1.75 years and counting), Spencer was renting a van for a run into Panama City, so several of us chipped in and we were off on an all-day shopping extravaganza.  He knew the city like the back of his hand, and was taking requests.  Suz needed an Alcatel hot spot and some SIM cards (our Google Fi phones didn’t work well in the San Blas islands).  The phones in the U.S. generally don’t use Band 28 which is more or less ubiquitous in many other countries.  Don’t ask me-that’s the Admirals’ job, and she gathered info from various sources for 6 months before arriving at this decision.  She had been in contact with a guy who spoke English at the phone store at Albrook Mall.  He got a hotspot and told her that he’d be in to help her set it up.  Yay!  This is a whole ‘nother story, but the Mall is the largest in Central and South America (It’s over a mile long, and several stories high-people literally take a cab to get from one end to the other)  Spencer knew exactly which entrance to use, and 40 minutes later, we had the goods and were headed to our next stop.  We hit a couple of marine chandleries, the Casa de Jamon (for gourmet foods-they had 20 or so Serano hams hanging in one area), the Discovery Center (beyond description-kinda like a cross between Home Depot, Walmart, and Bed, Bath and Beyond.  You could find everything from power tools to tampons).  Next, it was time to do some serious provisioning.  PriceSmart-Panama City’s equivalent to Costco.  Of course, Spencer had a membership, so it was “Katie bar the doors.”  We rounded out the day and provisions at a regular grocery store(Riba Smith), which was considerably more upscale than the one in Colon.  Eleven hours after we started, we were back home, and filling Alizann.  The deck fridge wasn’t working-#@%&!!.  I had turned it on several days earlier, and heard the compressor kick on, so I ASSUMED that everything was copacetic.  We jammed everything in the galley fridges and icemaker and hit the sack.  Suz spent most of the next day breaking down large packages and vacuum sealing their contents in smaller aliquots.  I thought that the control module in the freezer was shot (as it had been at Atlantic Yacht Basin after storing a few years ago), but after a bit of troubleshooting, discovered that it was just a cooling fan.  (Which had a feedback loop to the module-making it wonky.)  Off to the Alizann hardware store.  Yep-behind the corner settee in the salon there lived not one, but two 6” computer fans.  An hour later, we had cold.

We were getting closer to being outta there when Windows alerted us that there was a new update that needed installing.  No problem-4 computers updated.  Sonofagun!  The Nav computer (You know the one-it has 2 programs of navigation software, our secondary radar and all of our routes and waypoints on it) wouldn’t even boot up Windows.  This looked like it was going to be a big one, so I started another project.  Two full days later, after Suzanne had burned up the phone with Scotty and Rose Point Navigation’s techs, she had reinstalled Windows, repaired a Com port, found our radar and resurrected some vocabulary from her archives that I haven’t heard escape from her lips in many years (maybe since our eldest was a teenager).  She also now had LED lights in all of her kitchen cabinets, activated by switches on the doors.

Weather looking good for an overnighter to the Bocas del Toro archipelago west of Colon, the Girl is shipshape, so we’ll head out a little…