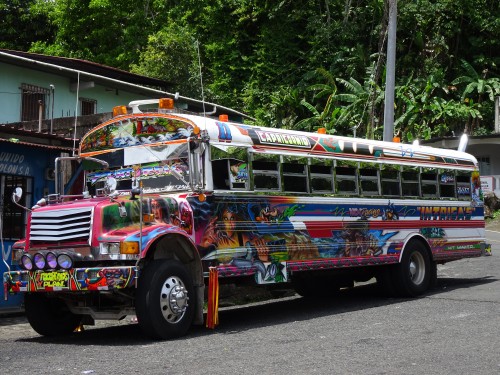 It’s like that “Thank You” note that doesn’t get sent right away.  The longer you wait, the harder it is to send it.  Well……I hope that you’ll accept my apologies for the 100th time.  Your recalcitrant, writer-blocked, tongue -tied, lazy blogger is back.  Sheesh!....we’ve already been to the States and back.  Rainy season will end in a month or so, but we’re already on the move.

Departed Hollandes on the 31st of May for a 2-hour run to East Lemmon Cay, where we helped a lady with a severe toothache sort out her medication regimen, and explored on the dinghy for a possible future stay.

Off to Chichime, where we wedged into a very crowded anchorage.  We did a bit of snorkeling, but never went to shore as it really wasn’t very appealing to us.

The 4th of June saw us leaving the San Blas archipelago.  We were now on a mission to get to Shelter Bay Marina in Colon, the Girls’ rainy season home.  We anchored in Linton Bay, on Panama’s mainland.  It is a very busy little outpost, with a huge mooring field and a small marina.  The whole place looked like it needed a lotta love (and money).

Next stop was Portobelo, a port and small town, also on the mainland.  We stayed a couple of days, anchored beneath the ruins of an old Spanish fort.  Being a vital port in the Spanish “Triangle of Trade” (Consisting of Santa Maria, Portobello, and Rio Chagres), used to extract the vast quantities of precious metals from South and Central America, it was a juicy target for pirates.  Among others, Henry Morgan had sacked and burned the town.  We explored the ruins and also the town of Portobelo on the other side of the bay.  There, we also got our first glimpses of the “Diablo” buses-ornately decorated school bus-type vehicles which made regular runs between Panama City, Portobelo and Colon.  The paint jobs were crazy.  A visit to the Iglesia de San Felipe was a must, as the statue of the “Black Christ” was ensconced there.  Scores of miracles are attributed to the statue, which was found floating in the bay in the early 1600’s.  Every year, on October 21, thousands of pilgrims from all over Panama converge on Portobelo to celebrate the Festival de Cristo Negro.  While we were anchored in Portobelo,, we had torrential rains.  The runoff from land was so severe that the water in the bay changed from blue to brown.  The lightning was spectacular, but in retrospect, very costly.  When we readied the Girl for departure on the 7th, our primary navigation systems (Chartplotter, Depth sounder, and Radar) were down (and out).  #$@%!!.  That one’s gonna leave a mark on the nestegg.  Fortunately, our PC based backup system was unfazed, so we didn’t have to resort to compass, sextant, and paper charts.

Dang!  We were here now, but not quite ready for marina life.  So….we passed Colon and headed up the Chagres River, anchoring just inside the bar after threading our way through a tricky passage in the reef.  Sandy and Britt joined us there, as they were on their way to Bocas Del Toro, where they would haul their boat for the Rainy Season.  Suz and I hiked up to Fort San Lorenzo, which guarded this important waterway during the 17th thru 19th centuries.  Britt and Sandy were off the next morning.  Suzanne and I decided to travel up the river to the dam at Lake Gatun.  The trip was about 6 miles up the winding river, with nothing but rain forest/jungle on both sides-just beautiful.  Up at the dam, we watched as a freighter transiting the Canal passed by around forty feet above us.  On the way back down the river, all of a sudden the Howler Monkeys started up in full out four-part harmony.  This was really strange, as it was a beautiful sunny day.  (They usually get rockin’ just before it starts to rain).  Whup! Whup! Whup!  We jumped out of the pilothouse in time to see a military chopper threading its way over the river behind us.  He was so low that he was between the trees on either bank.  Suzanne thought he was going to hit our mast!  He popped up and over us, then he was gone.  Silence returned to the forest.  Guess he just wanted to see what this boat was doing so close to the dam and Canal.  Slip D 42 at Shelter Bay Marina awaited us, so we passed through the reef, and an hour later the breakwall at the southern end of the Panama Canal, entering the small bay where the marina is located.  It is on the property formerly occupied by Fort Sherman, the U.S. outpost that guarded the Caribbean end of the Canal when it was run by the U.S.

The next 10 days were busy, busy, busy.  Here in Panama, the rainy season isn’t just wet…it’s WET!  Mold and mildew are a huge problem when leaving a boat here.  So…….everything came out of every locker and storage space (I have 44 compartments listed in my inventory spreadsheet), the space was cleaned meticulously, then sprayed with white vinegar before being refilled.  The water tanks were drained, opened, dried out and vacuumed.  Fuel tanks were filled to avoid condensation.  Routine maintenance, oil change, filters, fuel filters and water filters were replaced….you get the picture.  Repairs were performed (Yes, the Admiral diagnosed a blown video board in our Nav computer and got one ordered, even though the company was reluctant to send one out to a non-professional).  Of course, it wasn’t all work and no play.  We renewed friendships with other cruisers that we had met along the way, and made some new friends while enjoying Happy Hour at the pool.  The marina general manager, Juanjo, was the manager at Las Palmas where we stayed in Puerto Rico several years ago.  We had a lot of catching up to do.  The week flew by, and we moved to the marina hotel when Alizann was hauled.  We had her shrink-wrapped and put a dehumidifier in the galley sink to keep the humidity down.

The 19th of June came in a flash, and our new driver, Olmero drove us to the airport in Panama City for our flight back to the States.

Okay, I already said we were back, so we’ll get on with this season