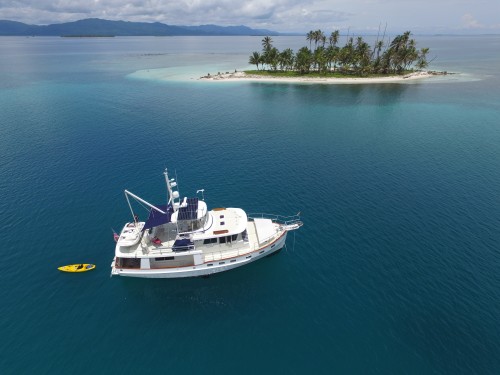 It’s June 1rst, and we’re at anchor at Banedup in the Eastern Lemmon Cays.  Our plan was to move to Chichime today after one night here, but the squalls have been rolling through all morning, with winds gusting to 25 knots and sheets of rain.  It’s certainly not good weather for spotting reefs and shallows, so we moved the Girl to a better spot in the anchorage and will spend another day here.  There are a lot more places that we want to scope out in the next 10 days or so before we leave “Alizann” in Colon, and head for the States.  We’ll be out tomorrow, rain or shine.

We left you in Coco Bandero.  Well, the weather was gorgeous, and the anchorage was absolutely beautiful, so we ended up staying another day.  Coco is one of the most popular spots in the San Blas.  It is the cover photo on the “Cruising Guide to Panama,” and, during season there can be as many as 30-40 boats there.  Besides us, there were 3 other boats.  The anchorage is surrounded by shallow reefs, so we dropped the kayaks in and got some exercise, paddling around the islands and out to the Caribbean on the other side of the barrier reef around a mile or so away.  It seemed like the perfect spot for some aerial pics, so we put “Scout,” our drone up.  I think that he got some good shots, but you’ll have to be the judge.  In the afternoon, we had a visit from Vinancio and his brother.  He specializes in selling Mola’s, hand-stitched artworks of traditional local images.  Much like cross stitching and embroidery combined, they’re created by the local ladies on rectangles of cloth around 16x20 inches in size.  Vinancio is well-known amongst the cruisers, and the Admiral had been hoping that we’d be able to find him.  As it turned out, he found us, thanks to Sandy and Brett on “Halcyon,” who had left us the day before, but had given him our names and location.  My math isn’t that great, but I’m pretty sure that he made around $300/hour in the 2 hours that he spent with us.  When they left, he asked us for one of our boat cards with a note from us that we’d purchased from him.  It seemed strange for us to be giving him a receipt, but he explained that there is so much drug trafficking in this area that he might have to justify to the authorities why he had so much cash.  Go figure.  As they were leaving, I asked him if he knew Apio (our fruit guy).  He asked: “Did you give him any money?”  When I replied affirmatively, he just shook his head.  The next morning, Apio was vindicated.  He showed up with our produce order and got the other half of his money.  We hauled anchor at 1100 for the arduous hour-and-a-half trip to the “Swimming Pool” anchorage in Hollandes Cay.  On our way, we were hailed on the VHF by Tad and Robin aboard “Bisou”, the catamaran that had been berthed next to us for a day or so on Aruba.  They were headed to the same anchorage.

The “Swimming Pool” is another one of the really popular anchorages, and can accommodate 40-50 boats during season.  There were around 10 boats anchored when we arrived, including “Halcyon.”  We were excited, as we had hoped that we’d meet up with them again.  The next six days flew by.  We hadn’t intended to, but the snorkeling, exploring, and visiting with new friends was too good to give up.  Dan and Jackie aboard “Pleasant Living” and Mike and (haircut) Holly aboard “Picaro” from Santa Marta showed up, and it was like old-home week.  Of course, we had to meet Reg and Debbie, aboard “Runner” who are pretty much fixtures in the anchorage.  Although they have been cruising the San Blas for 19 years, they have been at anchor in the “Pool” nonstop for the last 3.  Reggie says that he goes ashore “once a decade,” while Debbie hitches a ride to the mainland a few times a year.  They’ve got a local guy who shops in Panama City for them, and brings provisions out every 2 weeks.  Not my cup of tea.  Diff’rent strokes.  Every evening around dusk, we’d look for the resident Caiman (crocodile) as he/she swam through the anchorage on its way from the barrier reef to who-knows-where.  He was usually accompanied by 2 sharks who glided beneath the boats around the same time.

Before I sign off, let me say a few words about our Panama cruising in general.  Our plan is to spend next season in and around the Caribbean side of Panama, most of the time in the San Blas.  The last few weeks of this year, we’re trying to get a feel for the cruising here and gather intel and make contacts.  At this time, there aren’t many other cruisers here.  It’s the rainy season, and most have headed home.  We’ve had rain nearly every day, usually in the afternoon.  Most days, we can hear thunder rumbling in the distance nearly all day.  In the evenings, we usually get a pretty good lightshow-mostly in the distance, but every so often too close for comfort.  The Admiral says that besides the U.S.A., there’s more lightning here than anywhere else on the planet.                                                                                      As far as the anchorages go, away from the mainland here in the east end of the San Blas they’re very different than what we are used to.  We usually anchor in the lee of a large land mass or in a bay.  Although there are islands here, they are tiny-often no more than a sand spit with less than 10’ of elevation and a few palm trees.  The anchorages are often just spots of water that are deep enough to be navigated, surrounded by many square miles of reef, often no more than a foot or so deep.  It is really strange to look out into the distance and see boats apparently anchored in the middle of open water.  Crazy.

Provisioning here will be different too.  There really aren’t any cities on the mainland here, and none out in the islands.  Several times a day we are approached by local Kuna guys in their ulus and pangas, selling fresh fruits and vegetables.  If you love lobster, this is the place for you.  There are always fishermen coming around with live lobster, octopus and conch, as well as an occasional fish.  This morning, we got a call on the VHF from the sailboat next to us saying that the “Walmart” guy was at his boat.  He had soft drinks, frozen meat, veggies, fruits, beer and etc.  “Did we need anything?”  Turns out that they have been long-term cruisers here as well, and the “Walmart” guy fills custom orders for them on a biweekly basis.  Needless to say, we got his contact info for use next season.  I’m guessin’ that there are more guys out here during season, but I think that we may press the deck freezer back into service and bring out some frozen meat with us, though.

The cell service is virtually non-existent with phones from the U.S.  Up until now, we have had excellent results with our Google Fi phones wherever we traveled-not now.  Yesterday was the first time that we have seen any emails.  Text only.  No images.  Apparently, the phones here are allowed to have more powerful antennas, and it’s necessary to buy a local phone/hotspot to get any connectivity.  We’re getting our weather and texting capability from our satellite device, but we’ll have to do a little more research into our options for communication before next season.  This report will stay in the can until we have WiFi.  That may be much….