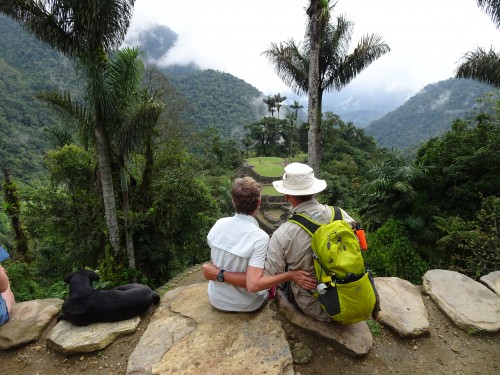 I woke up a couple of times during the night to hear it pouring rain on the metal roof (or so I thought).  When we got up at O’Dark-thirty, I realized that the noise was from the river, now swelling from the recent rain roaring past camp.  True to Estefan’s word, it was not raining in the morning.  When we started out at 06h00, the mist was still hanging heavily over the dripping vegetation.  An hour into the morning, I let my attention lapse and rolled over my right ankle.  No!!!  Laying on the wet path, I couldn’t imagine that my hike would end only 3 hours from our goal.  I picked myself up and tested the ankle-it would still hold my weight, but not without barking at me.  I knew what was next.  (I had torn the ligaments in this ankle when I was 16, and after 2 months on crutches it was never the same.  I’ve rolled it several times since, and it’s always the weak link).  Fording the river a half hour later, there was no hopping across boulders, as the water had risen considerably.  The cold water came at just the right time.  When I took my shoe off, I thought Indio’s eyes were going to pop out of his head.  My ankle was already swelling, and blood was pooling at the edge of my sole.  No surprise to me-been there, done that.  Estefan asked me if I wanted a mule to come and take me down.  Well…we got that sorted out in a hurry.  Indio produced some analgesic cream and an ankle brace.  A few minutes later, we were headed back up the hill.  Ciudad Perdida predates Machu Pichu by about 600 years, and the stone “steps” have been there ever since.  Built out of uncarved natural stone, the steps have a very irregular rise and run. The only consistent feature is that they’re very narrow and steep.  We couldn’t help but wonder what coming down their wet smooth surface was going to look like.  I didn’t count the steps, but I’ll take their word for there being 1200.  It took us about 40 minutes of nonstop climbing to get to the top.

We had two-and-a-half hours to explore the site.  Indio led us around and spoke to us about the ancient Tairona people who built and lived in this city of over two thousand inhabitants, pointing out artifacts and explaining the layout of the buildings.  About 80% of the ruins are still covered by jungle, and there are no plans to uncover them.  I won’t try to describe our visit here-it’d be like trying to describe the Grand Canyon to someone.  You just have to be there.

We were almost to the bottom of the steps when it started raining again, this time a gentle drizzle.  We retraced our steps from earlier in the day, stopping for lunch and to pick up our packs at the previous nights’ camp.  The rain began in earnest.  When hiking up and down the numerous red clay ravines, you had to follow the stream of water flowing down, as it washed away the slippery red mud, leaving small gravel for traction.  Walking outside the water flow was hopeless.  The mud was slipperier than wet ice.  A couple more hours of trekking brought us into our bivouac for the evening.  Lots of smiles and……cold BEER!  The routine was the same as the previous nights, and by 06h00 we were back on the trail.  The day’s 6 hours would have 2 steep “ups” of around 45 minutes each, punctuated by, and ending with a few hours of “downs”.  After the first “up”, we had the option of spending the night at a camp or continuing back to Mamey.  The 4 of us opted for the latter, and a bit after 12h30, we rolled into the restaurant that we had started at four days earlier.  The rest of the gang had been there 20 minutes earlier, and were already at our table.  They gave us a standing ovation and 4 cold beers.  The groups of hikers waiting to go up gave us the eye.  I had a pretty good idea what they were thinking.  “If they could make it, I can make it.”  So glad to lend the moral support.  Back to the Land Cruiser, it was “Mr. Toad’s Wild Ride” back down to the highway.

True to form, our trip back home was not without incident.  One of the Magic Tour Toyotas was broken down, parked on the side of the road.  I thought we’d grab the clients, squeeze them into our vehicle and continue home.  Nope.  Joel backed up, hooked up a 10’ nylon tow strap and we were off, towing the other vehicle 10 feet away at 45 miles per hour.  That’s not the best part.  Joel got a call on his cell phone.  There was a police checkpoint ahead.  No problema.  It was on a downhill headed to town from the mountains, so they just disconnected the 2 jeeps.  Our disabled pal then just rolled down the several mile long incline and past the checkpoint.  Fortunately, they didn’t stop him.  When the road flattened out, he stopped and we rehooked him and towed him back to town.  Never a dull moment.  Joel dropped us off at the marina at dusk, and that’s the end of our Ciudad Perdida adventure.