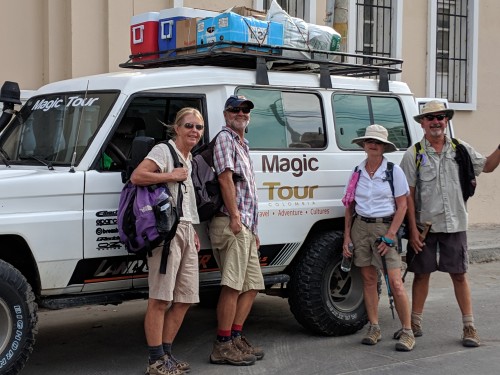 The Girl all bedded down for our 4 (or 5) day absence, the backpacks loaded and by 07h45 on Monday morning, we were ready to roll.  After spending the whole day in bed, Suz seemed to be on the mend from her G.I. bug-at least she hoped so.  Always game, she never says die.  Sue and Mike, our new Australian friends met us on the dock.  We walked out to the marina gate, where we were to pick up our ride to Magic Tour, in uncharacteristic silence.  Turns out that we were all thinking the same thing:  Were we physically and mentally ready for the arduous 4 days ahead of us?  When we arrived at the office and joined the gang that was waiting there for our 2 hour ride up to Mamey, the starting point of our trek, the uncertainty in my mind just blossomed.  There was no one else in the group of 27 people waiting that was less than 30 years younger than us, and boy, were we getting the eye.  In the end, that sealed the deal for me.  There was no way that I wasn’t gonna do this thing.  I’m pretty sure that my Bride was thinking the same thing.  We were split into 2 parties.  Ours had 13 hikers: a German couple, a Dutch couple, a couple from Italy, 2 guys from Sweden, a guy from Belgium, and the 4 grandparents.  Our local guide, Indio got us all briefed through our translator, Estefan, while their intern Juan loaded our gear onto a couple of Toyota Land Cruisers.  Our driver, Joel was a familiar face-he had driven us up to Mompox a week or so previously. 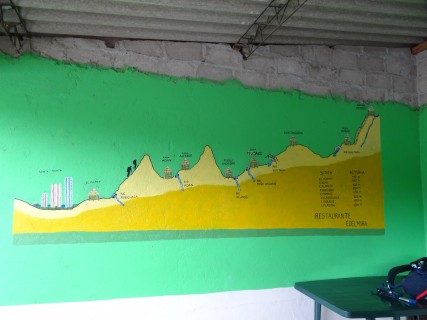 We arrived in the village of Mamey right around 12h00, just in time for lunch.  As we were eating, groups of hikers were straggling in, looking happy but bedraggled.  Lotsa “High-fivin’” was going on, as they had completed their hike.  Indio gathered us up in front of the topographical representation of our hike painted on the wall and took us through the plan.  Today would be a relatively easy walk.  Four hours, with one steep “up.”  The kicker was that there was no cover for this portion.  “Make sure that you have plenty of sunblock on, wear a hat, and drink lots of water.”  It was HOT.  Even though it was kinda hazy the sun beating down was relentless.  The footing was good, however, 2” of fine white dust covered the path which we shared with Pack Mules and motorbikes.  Fifteen minutes into our first steep “up”, our pal Sue said “I’m not going to make it”.  Well, we certainly weren’t going to make the time that the youngsters were, but we were going to do this thing at our own pace.  And so it went.  Rest stops were well planned.  Just when you thought your heart was going to jump out of your chest, there was the rest of our gang, catching their breath, having a sip, and maybe a snack of fruit.  Then, it was off again.  After a few hours, we passed the last spot accessible by motorbike.  After that, we only had to share the path with mules.  We arrived at the first camp a bit ahead of schedule, even with us taking up the rear.

Okay, so here’s the skinny on the camps:  The sleeping areas were like pole barns without walls-roof only.  The beds consisted of rows of bunks, each encased in mosquito netting side-by-side on a packed dirt floor.  The “mess halls” were rows of long tables and benches situated under a similar wall-less structure, with the galley attached.  All open air.  The toilets were in a separate cinderblock building with the “showers” behind.  These did have walls.  The shower consisted of a ½” pipe coming out of the ceiling, supplied by cold river water.  There weren’t many showers, but you didn’t need to worry about somebody luxuriating in the hot shower.  For Suz and I, the drill was simple:  Arrive at camp, grab a bunk, then head straight to the shower while everyone else was milling around.  Rinse out soaking wet clothes (I’m not exaggerating this one-you could literally wring out your shorts and shirt, you perspired so much) in fresh water.  Dry off with chamois (towel too heavy to pack).  Put on long pants and long-sleeved sleeping clothes and plenty of mosquito repellant.  Sit and chat with the rest of the group for a while, then have dinner.  There weren’t a lot of places to sit and relax, as the seats were just wood benches, and the generator went off around 21h00, so it was off to bed.

Several companies are licensed to trek up to The Lost City, and there are only a couple of camps, so we had as many as 50 people in camp at night.  Licensed?  Yep.  The Colombian government is very attuned to preserving their indigenous population’s ways of life.  The trek to Ciudad Perdida goes through indigenous tribal lands, so the number of hikers is limited, and you MUST go with a licensed company.  Forty percent of the monies collected in fees from hikers goes to the local peoples, and all of the camps are owned by them.  (Quite a contrast with the way that the United States treated our indigenous population).  The trail is closed for 1 month per year while the indigenous folks celebrate their religious season.  The Kogi are the tribal group that inhabit the area of the Sierra Nevadas where Ciudad Perdida is located, however the Arhuacas and the Wiwas, also descendants of the ancient Taironas consider the site sacred as well.  Over the course of the hike, we passed by several Kogi villages.  All of their buildings are constructed of natural materials-wood, bamboo, mud and palm leaves.  Several villages appeared to be abandoned, but Indio informed us that the owners were at their other homes.  The Kogi farm at different elevations, and all families have several homes, so that they can follow their crops.  Smoke was billowing out of the walls and roof of several huts as we passed by.  When a family moves back to their house after living away, the vermin are cleared out by starting a smoky fire in the chimney-less building.

05h00 came mighty early.  Happy Birthday to me.  Got a raise today-went on Medicare!  Out of the comfy pajamas and into the soaking wet clothes from the day before.  With humidity in the 90’s, ain’t nuthin’ drying overnight.  Since your clothes are soaked in sweat an hour after walking, it seemed silly to bring all that extra weight in clean clothes for every day.  The exceptions for us were underwear and socks.  T.M.I!  Breakfast at 05h30.  Our group’s departure time was 06h00.  (The different groups had different departure times, so we rarely saw other hikers on the trail).  Well….we were in a rain forest, and it was the beginning of the rainy season.  It started raining in the morning, and rained off and on (mostly on) for the whole 8 hour walk.  When I say it rained, I mean RAIN.  At times, it was tough to see the scenery across the sheer drop-offs next to the path, the rain was so heavy.  No reason to wear a raincoat, as you were wet anyway.  In fact, with the temperature in the 80’s the rain felt good.  The bad news was that the path was pretty steep.  In places where you weren’t scrambling up rocks, you were hiking up (now slippery) red clay.  The combination of water, mud and Mule deposits made a slip-and-fall a scary prospect.  Okay, that was the crummy part.  The good part was a hundred times better.  At times, the views across verdant green mountains and valleys with no signs of human habitation were breathtaking.  The trail, now fully in the rain forest was covered by a canopy of lush vegetation.  Bird songs, insect sounds and the drone of the rain created a sensory near-overload.  Combined with the sound of your footfalls, the rhythm of your breathing and the beating of your heart, you had your own personal mantra repeating itself throughout the day.  At times, you felt like you were the only person on the trail, as you could neither see nor hear anyone ahead or behind you.  The trail paralleled the Rio Buritaca.  At times, you could hear the water roaring 200 feet below you.  At others, the river was right next to the trail.  I think that we forded the river by hopping from boulder to boulder a couple of times during the day.

The morning hike was punctuated by a rest/snack stop.  Fruit was provided, and liquid in the forms of water, Gatorade or soda was available.  We stopped for lunch a little after midday.  Our cook, Maria had gone on ahead of us and had our second hot meal of the day prepared for us when we arrived.  Lotsa calories and protein at every meal kept us all charged up.  Supplies for the camps are brought up on mules, which we encountered frequently during the day, and heard passing by at night.  After lunch, we were back on the trail for 4 hours, again with a rest stop in the middle.  This pattern would be repeated over the next few days.  At one point, we crossed the river on a one-person platform suspended from a cable and hand-pulled by rope across the gorge.  Very cool.  We arrived in camp tired and wet, but exhilarated.  The next day, we would hike the trail and ascend 1200 steps, arriving at the Lost City four hours after our morning departure.  There was an almost audible buzz in camp that night.  Our translator, Estefan assured us that it never rained in the morning up there.  The generator went off early, as it ran out of gas.  We were too.