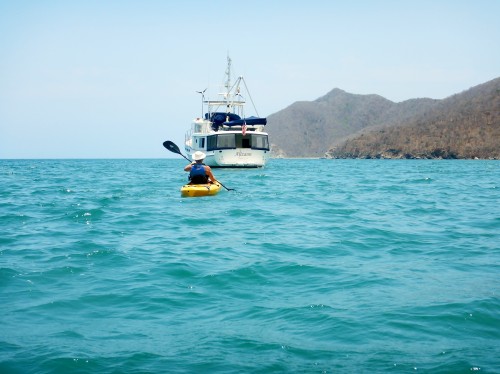 The Girl was resting so comfortably (and clean) that we didn’t even leave her all afternoon and evening.  Periodically, gusts of wind would race up the bay, causing our wind generators to really fly.  I love the sound of money going into the bank.  I think that we finally have our renewable energy sources tuned in.  The solar panels and the wind generators are at full potential.  We’re covering all of our electrical loads, and putting the surplus in the battery bank.

Warning:  A small bit of tech talk ahead.  I think that I told you that I had rewired our 110VAC watermaker to run off our inverter, so that we could make water while underway without running the generator.  That experiment didn’t work out so well at first.  The watermaker was drawing so much power that the alternator never fully charged the house battery bank, so…the engine start battery (which also runs the CPU controlling the engine) never got it’s share of juice.  As the start battery’s voltage dropped, the low voltage alarm on the John Deere panel went off, signaling that the CPU was not getting enough voltage to run the engine.  (Bad Juju!)  Eureka moment!  A month or so ago, I figured out that I could reprogram the alternator regulator in such a manner that we could overcome that problem.  After a half dozen passages, I can now confidently report that the fix is working.  We no longer regret not purchasing a 12VDC watermaker.

We had a wonderful night at anchor.  Absolutely no chance of rain, so we inflated the Air bed that our pals Dick and Jan bought us and slept up on the boat deck.  Under the full moon, we didn’t see many stars, but it was all good.  Friday morning greeted us with a conundrum.  We were only allowed one night in a bay.  The wind was, if anything, blowing harder than the day before.  We decided to stay put.  If the Coast Guard chased us out, we’d head back to the marina.  After a breakfast of Tuckmuffins (a legendary breakfast treat in my own mind), we dropped the kayaks into the water.  Paddling out to the opening of the bay, the Admiral found that she couldn’t paddle against the (I’m guessin’-30 knot winds).  One gust hit me on the beam and nearly knocked me over.  Back at the Girl, we had a refreshing swim/read/nap afternoon.  17h00 (park closing time) came and went without a visit from the authorities, so we had another quiet night on the hook.

Saturday morning we were up and out in order to get ahead of the winds, which increase as the day progresses.  We still had 20+ knot winds and 4’-6’ seas, but they were on our stern.  After a year or so without fueling, the Girl was thirsty, so we put on 575 gallons of diesel before returning to our slip.  We got our backpacks loaded up for our forthcoming hike to Ciudad Perdida on Monday, then took a stroll through town.  Holy week is a big deal here in this predominantly Catholic country, so the city was rockin’.  We snagged a table at “Ouzo” before the dinner rush:  Crispy pork belly app., Duck Confit Ravioli for Suz and Hornido Sofrito for Yours Truly, all washed down with a pitcher of Sangria de Casa (tinto).

We hit 07h00 Mass this morning, only to find out that the Easter schedule was different than the usual-it started at 06h00.  That turned out to be okay.  Forty-five minutes into the service, Father was just getting warmed up, so we still got an hour and fifteen minutes of religion even tho’ we were 45 minutes late.  Suz looked like Death during church, and she’s been in bed since we got home at 08h00.  It’s 15h00 now.  The lower G.I. funk has been going around, and it looks like she’s the latest victim.  We’ll see about the hike tomorrow………