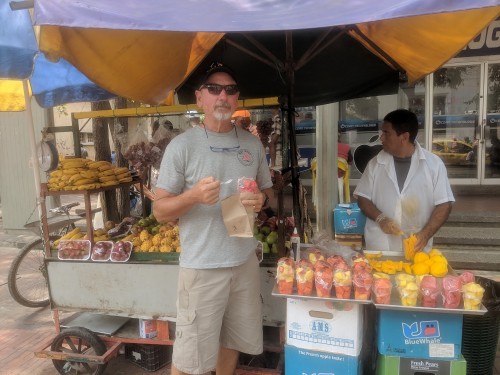 Our “go to” lady here at the marina is Kelly at the front desk.  (She’s one of the 3 people in town that speaks English-not dissin’, just sayin’).  We have a Q&A with her at least twice a day, and she’s invaluable.  She guided all of our paperwork through Customs and Immigration without us ever seeing an official.  Nice!  She also acts as our go-between with the marina manager and the dock supervisor.  IMHO this place would be lost without her.

Back to our walkabout, the visit to the Museo D’Oro turned out to be a hidden gem.  Besides exhibits featuring gold jewelry (as the name implies), there is a wealth of information regarding the Sierra Nevada regions of Colombia.  The museum also happens to be housed in the building in which Simon Bolivar laid in state after his death in 1830.  Written descriptions in Spanish and English attend each display.  We learned more South American history in two visits than we had in the previous sixty-odd years.

Adjoining Simon Bolivar Parque and adjacent to the Gold Museum is Juan Valdez coffee shop.  This is the Colombian version of Starbucks, with coffee that is ten times better.  Most of the best Colombian coffee is exported to Europe, with the inferior mass produced beans staying in-country, or exported to the U.S.A. The Juan Valdez chain’s aim is to introduce Colombians to their finest coffees. However, it was a total shocker when we were charged 13,000 pesos for a large cappuccino and a large latte.  Ohhh…. That’s around four bucks.  Needless to say, we’re now regulars.  The coffee dude doesn’t ask our names anymore.

In the morning, fruit vendors ply the streets, pushing their handcarts.  Some have amplifiers and loudspeakers over which they hawk their wares in the concrete canyons between the high rises.  Whole pineapples go for 3,000 ($.90 U.S.).  Bananas, Mangos, Pineapples and other South American fruits that I’ve never heard of are equally inexpensive.  After we buy fruit for the boat on the sidestreets, we have a favorite guy by Bolivar Parque that sells plastic cups full of sliced fruits, accompanied by plastic forks for 2,000 a pop.

We’re not really sure what the diving here is all about, but there are several dive operations in town.  We’ve visited a couple of them, and may go for a dive or two while we’re here.  -Keep you posted.

Besides street food, we’ve eaten at a couple of recommended restaurants.  “Ouzo”, is highly rated by both Tripadvisor and fellow cruisers-very good, with Sangria that is superior (or maybe it was so because we had been walking all afternoon).  Lamart, a funky little place recommended by Andrea (up at Minca), served up a mean Ceviche, followed by a very good main course of fish. A couple of other restaurants were good, but not memorable.  The common denominator is that all have been very inexpensive by North American standards ($30-$40 U.S. for 2 drinks, apps, and entrees).  Kinda makes going out a very viable alternative to staying home and cooking.

Back on the docks, we filled our water tanks with the tap water.  No good! No good! No good! cried another North American who had been here for 6 months.  “I was sick for a month, and Nigel, down the dock, ended up in hospital for a week (he has other health issues) from drinking the water.  Sheesh!  What a dummy.  We’ve been drinking tap water since we left home 5 years ago, but this IS South America.  So we’ve just taken on 300 gallons of potentially poisonous H2O in our public health graduate’s pristine water tanks. W.H.O website says that a cup-and-a-half of bleach in each tank should do the trick, so now our dishes, laundry, and skin is whiter than white.  The Admiral does this procedure once a year, so the drill wasn’t unfamiliar.  Meanwhile, we’re buying bottled water.

You know that these two science majors are nerding out on history these days, and our visit to the gold museum just whetted our appetites for some South American rat facts.  After a twenty minute, two dollar cab ride, we arrived at Quinta San Pedro Alejandrino, the estate at which Simon Bolivar spent his last few weeks. The botanical garden there was very much less-than-spectacular, but the colonial architecture and the artifacts on display more than made up for it.  With the help of our sorta English speaking guide, we learned more about General Bolivar, a.k.a. El Libertador.  Our taste of history at the estate provoked us to dig deeper, thanks Google, when we got home.

Monday the 8th, 08h30.  Time for our road trip to Mompox.  Sue and Mike joined us for the 5 hour trip, driving out of the shadow of the Sierra Nevadas, through the lowlands leading to and surrounding the once-busy port of Mompox on the Rio Magdalena. Established in 1540, the town was the major port linking the coast to the interior of the colony. During that period, goldsmithing and ironwork flourished in this center of commerce.  Late in the 19th century, trade routes changed to another branch of the river Magdalena, and Mompox has been in decline ever since.  As of late, it has been increasingly popular as a tourist destination, due to the plethora of colonial architecture there.  By no means touristic(?), I can see this sleepy village exploding on the traveler “must see” scene when the local airport and highway are completed.  We stayed at a small, 8 room hotel on the river in Mompox. It is a charming little property housed in the historic Portales De Marqueza warehouse. Our cook, Margherita served us up a savory breakfast of local fare which generally held us until dinnertime every day.  Jim and Carole joined us, and the six of us wandered town, taking in the local culture.  We visited several churches, took a three hour boat ride into the Pijino swamp, and plied basically every street in this busy little village.  Feeling like we had seen all there was to see in Mompox, Suz and I came home on Thursday, leaving Jim, Carole, Mike and Sue, who were spending another day (Their rooms were prepaid).

Suzanne prepared a fantastic chicken curry yesterday.  Mike and Sue joined us for dinner when they returned from Mompox, as we figured that they wouldn’t want to chase for food after the long drive home.

The washer quit yesterday with a load still in the drum.  Sleep last night was sporadic.  I hate having things broken.  This morning, while Suz was having her hair cut by a fellow cruiser, I pulled the doors and moldings off the cabinet where the washer/dryer sits, and pulled it out so I could take the cabinet apart.  Good news was that the failure was located in the switch that stops the washer when the lid is open.  I couldn’t fix the switch, so I bypassed it by jumping the wires.  All good!  The Admiral says that she’ll enjoy sleeping with the Maytag repairman tonight.  T.M.I., I know.  No worries, I won’t keep you posted.