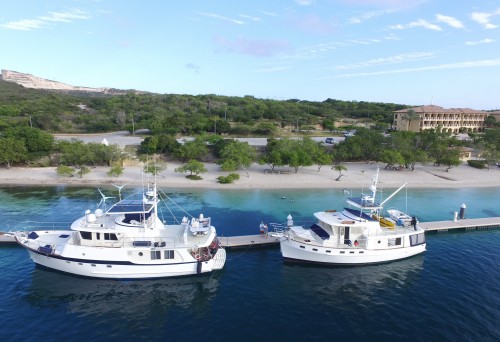 The thirty-five mile or so trip from Bonaire to Curacao is an easy one.  The wind and current is always at your back, thanks to the Trade Winds.  You (almost) don’t even need to check the weather, just throw a dart at the calendar and go.  Halfway across, we passed another Krogen 48 going the other way.  Chuck and Barb, aboard Tusen Tak were headed back to Bonaire from their seasonal haulout in Curacao for the 8th year.  They went to Bonaire 8 years ago, fell in love with the island and diving, and never left.  This’ll be their last year in Bonaire, as they’ll head back to the States, sell their boat, and R.V. around North America for the next few years.  We dragged lines all the way, and passed through several patches of water that were literally “boiling” with schools of feeding Tuna, but got nary a bite-Boo!  Our destination was Santa Barbara Plantation Resort.  A spot on their quarter-mile long floating dock in the channel leading into Spanish Water lagoon would be our home for the next couple months.  As we pulled alongside, our pals, John and Paulette aboard “Seamantha” were waiting to catch our lines.  Later, they whisked us off to Willemstad, a 30 minute drive, so that we could clear in with Customs and Immigration. Locating the offices would have been akin to the search for the Holy Grail on our own.  Each was on a different side of the harbor, and located amidst a warren of alleys and one-way streets.  It sure is nice to have friends like J & P.  We hadn’t seen them since Martinique back in May, so had plenty of catching up to do.  Paulette, like Suzanne, is a “research queen” and having been on Curacao for 6 months had a ton of local knowledge for us, right down to where to take our dry cleaning.

The resort hotel at Santa Barbara was our choice for the simple reason that both of our kids and their families were coming to visit us (at different times).  Our dock paralleled the sandy beach at the hotel, providing a nice sheltered place to swim.  We had 2 swimming pools and a “splash pad” at our disposal, as well as a fitness center and 3 restaurants (where we received a 20% discount).  If the boat got “too small”, we could always get a room at the hotel to overflow into.  The hotel is located within the Santa Barbara Plantation development, which covers 1,500 acres of the southeast end of Curacao.  There are paved roads with platted building lots covering a small portion of the acreage, but only 50 or so homes have actually been built.  So…….there is plenty of undeveloped “bush”, which makes for lots of hiking and mountain biking. We took maximum advantage of both opportunities.

We had a little adventure on one of our mountain bike treks.  Suz and I were heading down a dirt two-track through the bush on our way to a path we knew.  All of a sudden, a helicopter appears.  It is hovering at about 100’ of altitude, around 200 yards behind us, and sidling sideways, keeping pace with us, it’s gun door pointed toward us.  We had planned on stopping at a rifle range up ahead for a water break.  As we did, the helicopter stopped and hovered.  We figured that these military guys were just using us for practice until 3 white SUV’s roared up the track and positioned around us.  Flak jackets, semi-automatic weapons and faces as serious as a heart attack accompanied the guys that got out of the vehicles.  Hmmm.  “You guys coming up for some target practice?”  After a little discussion regarding who we were, where we came from, and why we were there, we were informed that it was “Not safe for you to be here”, and that we were to leave immediately.  Interesting.  We had been out here several times before, hiking and biking.  On the way home, we stopped at the Seru Boca marina and related our story to Robbie, the marina manager there.  Yep, he had gotten a call about us.  He told us that the military was looking for some Venezuelan illegals who had come ashore nearby, and that the troops should have told us instead of being so mysterious about it.

Besides hiking around our area, one morning we joined a local hiking group to a peak overlooking Pescaidera Bay. The hike was led by a naturalist who stopped along the way to identify and tell us about some of the local flora.  Although there weren’t many English speakers in the group, they were enjoyable to walk with.  Of course, a visit to an island without taking the guy who doesn’t like heights (Yours Truly) to the highest point wouldn’t be any fun at all.  We drove to the west end of the island to the national park there and scaled Mount Christoffel.  Most of that hike was an uphill on a reasonably wide path, but there were parts that traversed narrow (at least to me) ledges along drop-offs, ending with a short climb up the rocks at the end.  I had a hard time enjoying the view, as the Admiral scampered around the edges at the top snapping pics in a 20 knot breeze, because I was thinking about having to get down. (What a weenie!).

Shete Boka is another national park at the west end of Curacao.  It stretches for a couple of miles along the windward shore.  As is typical of the windward side, the land is very rocky and arid.  The sea can be wild, crashing in on the near vertical fossilized coral shore.  The park has dirt tracks which connect several scenic points along the shore, so each can be accessed by driving.  There are also hiking paths, so we had the chance to get around 10 km of walking in.  The wind was really blowing, and we got some good pictures at one of the bokas, where the waves were rolling in to this indentation in the rocks.  At another boka, a cave could be entered from the land, winding down to a small grotto which was open to the sea.  So much for staying dry, as every 10th wave crashed over the flimsy platform, leaving you crouching in 2 feet of water.  Another of the trails coursed inland, and up to a small promontory about a mile or so from the shore, giving us a totally different perspective.  We’d be back 2 more times, as both of our kids wanted to visit too.