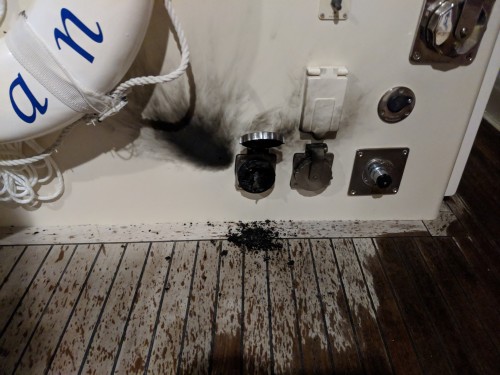 Here are the odds ‘n ends to wrap up Bonaire.

First, the couldabeena cruise ender.  I told you about the Ostracod night dive.  Suz and I came back to Alizann in the marina and were rinsing off our dive gear in the cockpit.  The wind was blowing offshore, and bringing with it a “chemical/electrical” burning smell.  Eagle nose mentioned it, I kept on rinsing.  A bit later….(well, let me say that the Admiral never uses that word unless seriously provoked).  I turned and saw that the electrical power cord entering our boat from the dock was completely melted where it entered the inlet.  The fiberglass above it was covered with a black plume of soot.  We hadn’t even unlocked the door into the salon, but when we did, the acrid smell was just a tad (yes, that’s sarcasm) stronger.  The back side of the power inlet is under the corner of our settee.  Also, under that space is a heat exchanger for our diesel furnace, the control for our cockpit winch, our power cord winch and its’ controls, assorted cabling for our stereo, and a 110V supply for an outlet.  I was afraid to pull off the cushions and remove the cover for the space.  When I did, I saw that the conduits and many of the wires had been reduced to a dripping mess (they looked like candle wax).  The backside of the power inlet had the consistency of that marshmallow that fell off the stick and into the fire at camp-black and easily crumbled by hand.  Soot covered everything, and the odor was intense.  The next compartments contained our non-perishable food.  Since our heating ducts pierced the bulkheads between them, the soot had permeated all cabinets up to and around the right angle 7 feet away.  We kinda lost our appetites, so spent the rest of the night trying to salvage what we could.  Suzanne pulled all the sooty labels off cans and jars, relabeling them with magic marker after washing every single one.  Every product in boxes came out.  Rice and flour went into Tupperware—You get the picture.

Now the postmortem.  We could have very easily lost our boat.  If you’ve ever seen a plastic boat on fire, you know EXACTLY what I mean.  Why did the fire self-extinguish?  All of our wire conduits are marine grade and self extinguishing (don’t cheap out with the Home Depot stuff).  I think that the presence of the cushions over the space caused the fire to oxygen-starve, as it must have all happened within seconds or less.  So, what caused this near-catastrophe and how could it have been avoided?  Okay, we all check the ends of our shorepower cords a couple times a day to make sure that they’re not warm (did that).  Routinely pull ends of cords apart to check for corrosion (do that).  Take apart power inlet to snug up screws and check for corrosion on the backside (got me on that one).  Unplug shorepower when leaving the boat.

The next week was spent ripping out old wiring and replacing, scrubbing, scrubbing, scrubbing, and applying 3 coats of paint, while the overlying, upholstered cushions lived in garbage bags containing baking soda.  Sunshine helped too.  Suz could still get a faint smell of smoke from the lockers-a 12V ozone generator from Amazon took care of the last bits.

As long as we’re on “Oopses,” here’s one for you.  Suzanne and I were doing a beach day at Coco Beach, just down the street from our marina.  It was a “No cruise ship” day, so we were nearly the only ones there.  We snagged a couple of lounge chairs under a shade and were peacefully reading our Kindle’s when I caught movement out of the corner of my eye.  I looked to my right while exclaiming to Suzanne that “That idiot is going to drive his jeep onto the beach!”  Whoa!  Nobody at the wheel.  The jeep careened over the foot-high seawall, across the 15-foot beach and straight into the water, where it stopped, hanging precariously on a rock ledge, it’s rear wheels in 2 feet of water, its front wheels hanging several feet off the bottom.  Every wave rocked the vehicle, threatening to pull it off the ledge into deeper water.  I yelled for the beach dudes working the bar.  Two of them tried to keep the car from slipping deeper, while I sent the third to fetch rope.  He came back with a clothesline.  “That’s all we got.”  “Dude, we need to tie this vehicle to the palm tree up there.  Go to “WannaDive,” they must have a longer, stouter rope.  Meanwhile, a beachwalker and a couple in scuba gear are on the scene, helping to hold the aspiring submarine.  I swear, the owner must’ve lived in his car, because life possessions, seat cushions, and last months garbage were all floating out.  Suzanne went into action, fishing crap(coke cans, bags of M&M, plastic bottles, etc) out of the water until the oil/gasoline slick chased her to the showers.  Yay!  Guy’s back with a real rope.  They get a line around the trailer hitch and we tie it to a palm tree on shore.  There’s been a guy watching the scene unfold from a distance.  A light goes on, and I walk over and ask him if it’s his jeep.  Yep.  I ask him if he’s called anyone to retrieve his car.  Well…. maybe later he’ll call a friend.  Even though I remind him of the ecological damage he’s causing, he seems unconcerned, As I’m calling the authorities, he melts away.  The cops never came, but I called STINAPA, the managers of the national Marine Park, and within a half hour they had a crew and a pickup truck on site fishing out the mess.

I mentioned that there’s no anchoring anywhere around Bonaire.  When we arrived, all 42 moorings were occupied, so the marina was our only choice.  (By the way, if you’re headed to Bonaire, make a marina reservation as the moorings are first come first serve-no reservations).  Many of the moorings were occupied by participants in a large sailboat rally slated to leave Curacao several weeks hence.  Nonetheless, when we passed by the mooring field on our way to dive, we would notice several new boats in the field every day.  Finally got the memo from some sailing friends that we met there.  The grapevine knows who’s leaving and who needs a mooring.  The minute that a mooring is vacated (or before if the incoming boat ties their dinghy to the mooring), the ball is re-occupied.  A few weeks in, we had met enough friends that we were now part of the grapevine.  The day that we moved out onto a mooring, we had 3 choices.  Well……. that night was an adventure.  We had a wind shift, then the wind died (unheard of), and we found ourselves literally on top of our neighbor boat.  They were very gracious, but I stayed up all night fending off their boat so they could sleep.  The next morning, we were back to the marina, but not before calling our new friends, Dennis and Karen, stuck on their sailing catamaran “Toes in the Water,” in the marina.  They popped out and snatched our mooring as they were a few feet shorter than Alizann.  It only took a day or 2 for the grapevine to get us out onto a ball with more swinging room.  And……. we could dive right off the stern of the boat.

Thanksgiving was closing in on us fast, so Suz got a feast organized.  She and Karen from “Toes in the Water” started working on the menu while we decided on the guest list.  We ended up with Karen and Dennis, Dan and Roseann (our morning water aerobics pal) from “Exit strategy”, and a couple of their friends who we had over for dinner but never saw again so don’t expect me to remember their names.  The Admiral/Chef outdid herself.  Roast turkey, mashed potatoes (of course), homemade bread, cranberry/citrus salad, sweet potatoes, ambrosia, pumpkin pie and Hooch (yeah their was a bit of alcohol in it) pie.  Wine from Martinique (France) helped wash down the goodies from apps to the main course, while liqueurs chased dessert.