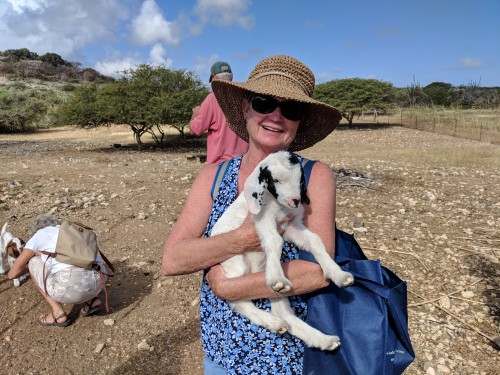 You got the diving part-lots of it.

After dives on Klein (Little) Bonaire, accessible only by boat, we’d stop at the sandy beach there.  I’d drop the Admiral and our beach shelter on the shore, take the dinghy out to a mooring and swim in.  Did I mention that anchoring anywhere around Bonaire or Klein Bonaire is strictly forbidden?  Well, it’s a good thing.  Keeps the reefs from being destroyed by anchors and chains.  Picnic lunches, reading, napping and floating on our swim noodles was the extent of our activities on Klein.

Flamingoes are a big attraction on Bonaire, which fulfills all of the requirements for an ideal Flamingo breeding habitat.  About 2,500 of the Southern Caribbean’s 50,000 Flamingoes reside on Bonaire.  The population can rise as high as 7,000 as the birds fly regularly between Curacao, Venezuela and Bonaire.  Flamingoes are the only filter feeders in the bird kingdom.  They stand in shallow water, tilting their heads upside down while stirring up the mud on the bottom with their feet.  This they draw into their mouths where their tongues, acting like a plunger forces the muddy water through lamellae on the bill, filtering out small edible bits of plant and animal matter.  We spent a fair bit of time, both on the North, and South ends of the island, where salty ponds supported flocks of these colorful guys.  By the way, the adults are pink from the betacarotene in the animals that they eat.  The juveniles start changing from white to pink as their diet transitions from herbivorous to carnivorous.  The Papiamento word for Flamingo is “Chogogo.”

The Yellow Shouldered Amazon Parrot is a bird whose habitat is primarily in Bonaire and Venezuela.  The population of these birds on Bonaire has been decimated by poaching (they’re beautiful birds, and in high demand as pets) and loss of habitat.  Fortunately, it is now illegal to own Yellow Shoulder’d’s in Bonaire.  Echo Bonaire is a facility dedicated to “Conserving the endangered Yellow Shouldered Parrot of Bonaire through conservation management, local community engagement and research.”  Suzanne and I visited the facility and received a tour from its’ director Julianka.  We visited the cages where injured and confiscated birds were being rehabilitated-over 75 parrots and 100 Brown-Throated Parakeets have been returned to the wild.  She also showed us their nursery, where plants are grown to reforest areas of the island as parrot habitats.  Some 85 acres have already been created, and fenced off to keep invasive herbivores (feral pigs, goats and donkeys) out.  We told Julianka that we’d be at the northwest coast the following Saturday where more trees were to be planted.   If you want to know more, check out www.echobonaire.org.

Okay, so let’s talk about the donkeys of Bonaire.  They were originally left here by the Spaniards who visited the islands briefly in the early 1600’s, before moving on to the South American mainland in their quest for gold.  (In fact, the Spaniards labelled these the “Islas Inutiles”- The useless islands, as they lacked any sources of gold).  The feral donkeys have become a real problem, as they are responsible for wreaking havoc with all edible vegetation.  Car/donkey confrontations are also a real problem.  Enter “The Bonaire Donkey Sanctuary,” whose “primary objective is to offer a sheltered, protected life to all the donkeys of Bonaire.”  The sanctuary covers around 400 acres (I think) near the airport on the south end of Bonaire.  Sick and wounded donkeys are brought there from elsewhere on the island.  They are then nursed to health and housed for the rest of their lives.  The Sanctuary also participated in a program to castrate males in the wild to control population (Until the “animal rights” folks got involved and put a stop to this humane way of controlling the population-ed.)  We visited the Sanctuary by truck.  Driving through the habitat with a bag of raw carrots provided for some interesting pictures.  Want more?  https://donkeysanctuary.org

Ever drink a cactus?  The Cadushy (cactus) Distillery will give you a chance to do so.  This small distillery formulates several liqueurs from a sustainable crop (they collect cactus on the roadside).  Their distillation apparatus is TINY and looks like it could have come straight from your uncle’s place in the hills of North Carolina.  It took about 10 minutes for the tour, a half hour for the tasting.  I think that the stuff is an acquired taste, but hey, we were here, we hadda do it.

Alleta has a goat farm in the middle of the island where she raises milking goats.  She makes and sells feta cheese, goat milk, and goat milk yoghurt.  What started out as a hobby has morphed into a full-time (although definitely on a shoestring budget) business.  We had a chance to milk goats and play with some babies which had been born several weeks earlier.  They were the cutest, and we got some good pictures.

We decided that we needed a quiet “Beach Day.”  Remembering “Sorobon” resort from our outing at Lac Bai, we figured that renting a cabana on the beach there would be a perfect way to chill on the water while staying out of the sun.  (Neither of us can afford a lot of time sunbathing these days.)  At Sorobon, a small exclusive resort, the pamper factor is high.  The palm-thatched bar afforded cold drinks and a delicious lunch while the windsurfers on the bay provided entertainment.

Regatta week in Bonaire brings sailors from all over the islands to participate in the races.  It also creates a mess on the reef that parallels the shore road in Kralendijk.  The Monday after the festivities ended, we joined around 100 other divers for a reef cleanup.  In all, we pulled a bit more than half a large dumpster of bottles, cans, and other assorted trash off the bottom.  “Thanks for the help” came in the form of a barbeque dinner at “Dive Friends” resort.  Suz and I won two reuseable grocery bags in the raffle-Wahoo!

Every couple months or so, (I really never figured out a schedule, think they do it when the spirit moves) a park ranger leads a hike which involves climbing Mount Brandaris, the highest peak on Bonaire.  The hike is timed so that the sun is setting just about the time that you reach the summit.  The view for 360 degrees is nothing short of incredible.  Being that the first half mile down would be a scramble down a scree-covered face and a foot-in-front-of-foot on narrow ledges, Yours Truly who doesn’t really care for heights was just a tad concerned as the sun went down.  As I crouched low and sweated every step, Admiral Mountaingoat nursed me along.  It was pitch dark by the time we got back to “Jason” our trusty little Toyota Hilux truck.  It was an incredible experience, and being in the park after closing felt like a taste of forbidden fruit.

The majority of the slaves on the island worked on the salt pans in the south.  You may be aware that salt was the major (sustainable)  export from Bonaire for many decades.  In fact thousands of tons are still exported by the Cargill Corporation to this day.  Production goes like this:  seawater is pumped into huge holding ponds where it is allowed to evaporate, leaving sea salt behind.  Back in the day, this salt was harvested and transported to waiting ships by slave labor.  As you may imagine, this was back-breaking work, and the sunlight glaring off the snow white salt often resulted in blindness for the workers there.  Nowadays all operations are mechanized.  After working 6 days in the pans, the slaves made the 8 mile trek to Rincon, where many of their families lived, to receive their weeks food rations at the King’s warehouse there.  After a day off, it was an 8 mile trek back to the salt pans for another week.

The King’s warehouse now contains a cultural museum which is well worth the stop.  After visiting the museum, Suzanne and I returned on the last Saturday of the month for the cultural market.  Not many tourists, but the locals turn out in force for food, music and activities for all ages.