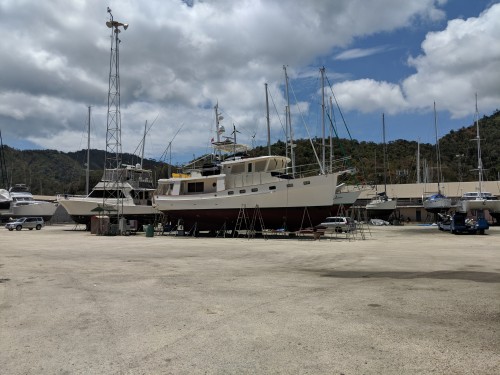 Let’s just call this the “All work, and no play” log.  After an uneventful flight back home, and a very speedy visit with Customs and Immigration, Chad was waiting at the airport for us.  It was, of course, a real shocker to get off the plane dressed in jeans and a long-sleeved shirt.  Not exactly apropos for eighty-five degrees and seventy eight percent humidity.

Besides being filthy, the Girl looked good sitting at her berth.  She had new neighbors, sailors from Germany.  During our absence, John had kept a close eye on her.  He told us that there had been an unusually high tide which required retying some of her lines-thank you, John.  We spent the first full day just cleaning the outside from top to bottom.  Saturday was Market day, so we rode in to Port of Spain with Stanley (another of Jesse’s guys) for fruit, produce and Trinidadian shrimp.  On the way home, a blast through Massey supermarket rounded out our supply of staples.  We pulled away from the dock at 07h30 on Monday, the 26th, and took a short short toodle out of the harbor to do a quick system check and empty the holding tank.  By 08h15, we were in the sling of Peake Yacht Services Travelift, getting our first haulout in 2½ years.  After 2 idle months sitting at a marina in very bioactive (polluted) water, there was plenty of growth for the guys to scrape/power wash off her bottom.  Very fragrant.  We left to go have breakfast at Zanzibar, where we could watch from a distance.  Alizann’s spot in the yard was less than fifty meters from the Travelift, and equidistant from Zanzibar.  Once we were blocked and the jack stands were in place, the troops were mobilized.  Richard came to the boat and installed an air conditioner in the overhead hatch of our stateroom (the boat’s A/C doesn’t function when she’s out of the water.)  We met with Greg and Lincoln, who would be managing our yard work and went over our list.  As we talked, the list grew, and it wasn’t too long before our one-week haulout looked like it would take two or so.  Git ‘R Done!  We got up with Mitch, our welder, to pick up our burglar bars and have him weld the “knees” that he had fabricated for our stanchions.  Oops.  “Thought that you were coming back after Easter.”  Okay, back on task.  Rishi, owner of Jonathon’s Outboard Service was lined up to do routine maintenance and chase down a cooling problem on the dinghy outboard.  Lastly, we visited Franz, owner of West End Power to remove and inspect our stabilizer fins and bow thruster props.

It's Friday of our second week on the hard, (FYI, Good Friday and Easter Monday are national holidays) and we’ve been pretty pleased with the progress.  The hull has been sanded and has two coats of new paint (waterline-four coats).  The boot stripe has been raised 2 more inches and reprimed and painted.  The hull above the water line has been wheeled out and polished.  The dinghy has had 2 coats of epoxy and 2 coats of bottom paint.  The outboard has been repaired and serviced.  The welding has been completed, and the bars are being polished as I write.  Suz and I have been busy too.  We replaced the support for the swim platform (which was damaged in Puerto Rico).  In doing so, we found that the core of the platform was wet, having been infiltrated around some improperly bedded fasteners.  We removed all hardware, reamed out all holes, let the core dry for a week, removed soft core material then refilled all holes with epoxy and rebedded hardware.  After discovering this problem, we removed some rails from our boat deck, and discovered that it too, wasn’t bedded properly.  Good news!  Some holes damp, but not soft.  Same fix.  The tender got its rails rebedded-Hey! As long as I was mixing epoxy (Actually, each hole took several “pours” in order to control heat).  One evening, we spooled out 300’ of anchor chain and reversed it, end-for-end (to keep wear even), cleaning the anchor locker as we went.  Retrieving 300’ of chain by hand is a real workout, being that we had no hydraulic power to raise it mechanically.  I replaced the stainless-steel tubing on our water maker another day (starting to spring some little leaks here and there from corrosion).  Of course, the unit couldn’t be worked on in place, so I had to disassemble it and take the membranes out on deck to replace 2 of the tubes.  Meanwhile, the Admiral got software updated on all of our devices in between “Hey Suz, can you come help me’s?”  Cocktail time doubled as “Marlinspike Hour,” splicing up new working lines for our Girl.  That’s the big stuff, I won’t bore you any more with all of the little tidbits that were dealt with.  Let’s just say that we’ve been busy.

The Admiral’s birthday came around, so we shed our work clothes and gussied up for a night out.  Chad drove us, joined by John and Paulette,  to Aioli, a fine dining restaurant in Port of Spain.  Of course “fine dining” means a lot of things to a lot of people.  Well….the place had a continental vibe from the moment that we climbed the stairs from its’ strip-mall entrance.  The food was truly incredible.  We could have been in Paris, New York City or Napa Valley.  The service matched the appearance.  We had a very uncruiser-like night out, and Suz was smilin’.

We had a farewell lunch with John and Paulette on the 30th, as they were off to Tobago to join Ken and Sylvianne.  It was kinda sad to see them go, but we’ll surely see them in the future (we think that they may join us for the Panama Canal transit in a year or so).

Anyhoo, that’s it for now.  They’re thinkin’ that we’ll be back in the water on Monday, the 9th.  We’ll sit at the dock until we get some semblance of a weather window (it’s been GORGEOUS this week) behind the weather that’s supposed to blow in next week.