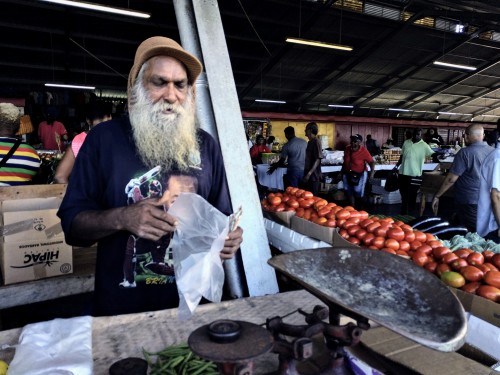 So, I was posting up some pictures, and realized that there were a few adventures before the Grandbaby trip that I missed:

First of all, every Saturday, Jesse has a van to the city market down in Port of Spain.  We’re off at 06h30, but that’s still a couple of hours after the market opens.  Oh yeah!!  It’s your typical farmers market on steroids.  You wannit?  We gotit!  That’s where we be goin’ for fresh everytang.  Produce, seafood, meat, and then there’s the Indian spices and etc.  Oh yeah, there’s a “Doubles” guy there that has our favorites.  (Thanks, John and Paulette.)  I dunno how many acres the market covers, but it’s enough to spend a couple of hours there.  Jesse says “an hour-and-a-half,” so the foray reminds me of an old TV show where they give the contestants a shopping cart and a short amount of time to fill it.  The first pass is to scope out the various stalls and wares for prices and availability.  Stop at the end point for doubles, then sweep back through to make our purchases.  After the market, it’s a quick (half hour) stop at Massey (grocery store) for staples, canned goods, and etc.  Back at the boat by 10h00.  Fill sink with bleach water, soak all fresh produce, refrigerate, put away dry goods.  NAP!!!

One morning, Suzanne, Paulette, and I had one of Jesse’s guys, Chad drive us out to the “Bamboo Cathedral” for a hike.  The area is so-named, because the bamboo trees on both sides of the pedestrian path overhang it, creating a tunnel-like effect.  Troupes of howler monkeys live in the area, so if you get there either before or after the heat of the day, you may see them moving through.  We arrived just before light and lucked out.  We were the only people there.  We heard the monkeys before we saw them.  The howls/growls were loud and throaty.  Then, overhead, we spotted a group of three moving through the canopy.  The light was bad, so the pictures were very marginal.  After hiking through the bamboo, which was beautiful in and of itself, we followed the unimproved pedestrian road to the deserted U.S.A. radar station at the top of the mountain, a remnant of WW II.  As you might imagine, the view was tremendous.

So, we were ready for a little independent adventure one day, so decided to take public transportation into Port of Spain to walk around and have a fancy lunch.  Suzanne made reservations at “Veni Menage,” a highly rated Indian restaurant.  When we told Jesse of our plans, he said “Just make sure that you’re out of Port of Spain by 13h30, because there’s an afternoon Fete going on just north of the marina, and no taxis, buses, whatever will drive down there because of the traffic.”  We arrived in POS in the morning, and window (and otherwise) shopped until our 11h00 reservation.  We were careful to avoid parts of the city that had been forewarned by locals. Lunch was remarkable.  We left the resto at 13h15 and walked down to the highway to flag down a bus.  Every one that went by was filled to capacity (unlike Grenada, overfilled vans get big fines here).  We decided that this wasn’t gonna happen, so we started walking to the central maxi-taxi terminal, about a mile-and-a-half away.  Baloney!  I stuck out my thumb, and a private taxi picked us up.  He was headed south and would drop us off at the maxi-taxi terminal.  There, people were packed up, waiting for a maxi south.  A nice lady who happened to be passing by told us that no taxis were headed north, because they didn’t want to get stuck in traffic up there.  The maxis were not obliged to make their routes if they didn’t want to, but the public buses were.  She suggested that we walk to the bus terminal and take one of the hourly buses.  Dang!  It was 14h10, we’d have to wait nearly an hour for the next bus.  Oh well, we hot-footed it to the bus station, about a half mile away (Oh yeah, did I tell you that it was raining now?).  We bought tickets and got in line.  15h00.  No bus.  16h00.  No bus.  We’re starting to chat up the folks ahead of us in line.  They’re still waiting for the 14h00 bus.  Rumor has it that the bus is having “mechanical problems.”  Yeah, but how is it that we’re looking at a lot full of buses that aren’t in service?  Long, long, long story short, a bus rolls in at around 17h30.  After all of the pushing ‘n shoving, we, who were around tenth in line, make it onto the 50+ seat bus with about 10 seats to spare.  After some near-fisticuffs, the security guard closes the door, and 30 people are left standing on the platform, awaiting the next hourly(?) bus.  The next day, Jesse just laughed.  We were not amused.

So… we got back home from the adventure to POS.  The “Pool Gang” at the marina had a news flash for us.  A solo sailboater coming in had a little problem getting into the slip next to the Girl.  Somewhere in the 4 tries that he took getting into the slot next to us, He HIT our boat.  Dang!  We inspected our trusty little ship, and yeah, there was a whack out of our boat, and a bigger whack out of the concrete dock.   Whatever.  I got the buffer out, and soon the scar was gone.  Went over to talk to the skipper.  He was apologetic (in French), and said he’d buy me a case of beer.  (Well, three days later, and after his departure before daybreak, we didn’t see a drop of beer.)  Two strikes-a sailboater and a Frenchman-just sayin’.

Guess we’re almost caught up, so……