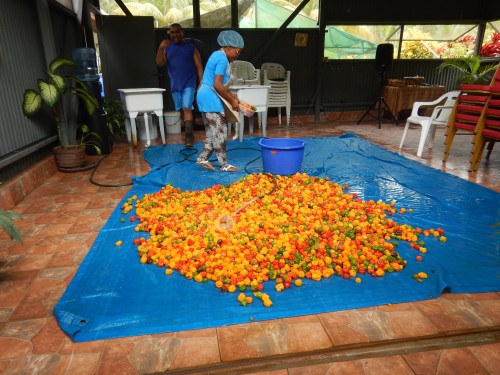 OMG!  Has it really been 2 months?  My bad.  No excuse except that we’ve been having waaayyy too much fun.

So, we arrived in Trinidad, which was where I left you hanging.  The marina at Crew’s Inn was pretty comfy.  We motored in, and the dockmaster put us in an end slip with the port side of the Girl along the wall, and her stern on the dock.  Right below the swimming pool-SWEET!  With the Admiral’s expert directions, we backed our little home between the boat next to us, the wall, and the boat that was tied on the wall ahead of us.  Paulette and John, aboard Seamantha were a few days early, but a spot was still located for them while they waited for their assigned slip to become available.  For the next few days, we just walked around to get the “lay of the land,” locating vendors, repair guys, boatyards, and most importantly a “Doubles” roadside stand, and the “Roti Hut.”  Suz and I contracted with Peake Boatyard to haul us and give the Girl a couple fresh coats of bottom paint, lined up a tech to remove our stabilizers (I’m getting’ too old to haul those babies around), located a welder to fabricate some “Burglar bars” for the hatches over our bed and “knees” for the stanchions holding our new awning on the boat deck.  In between these jaunts, we lit up the internet, ordering some replacement spare parts and miscellaneous doodads.  One day, when Mitch, the welder was over taking some measurements, I was knee-deep in sewing machine parts which were scattered all over the cockpit table.  He asked me if I was okay, to which I jokingly replied “Do you do sewing machines too?”  To my surprise, he said “Sure.  My Mom’s a seamstress.  Who do you think takes care of her machines?”  Knowing that I had a backup in case of disaster was reassuring, but YouTube pulled me through.

Meanwhile, we all were anxiously awaiting the arrival of our friends Ken and Sylvianne on the Krogen 48 “Sylken Sea.”  They had recently launched in Antigua after the boat spent hurricane season on the hard there.  I’ve already alluded to the fact that the weather and seas have been very uncooperative this season.  Every day that they were stuck behind the weather, we had 6 sets of eyes checking numerous weather websites and offering their valued opinions.  Emails and texts flew back and forth hourly (actually, more frequently) for days with conjecture about weather windows and best routes for them to take.  Of course, there was no pressure for them to get to Trini, just the fact that they wanted to participate in Carnival, and oh yeah-they had boat guests flying into Trini from Canada.  Long story short, they made it after a less-than-enjoyable few days at sea with the Mother Hens on this end following their progress and texting them every hour of the trip.  Their guests, Ken and Carol arrived to find a lovely boat to sleep on.

Jesse James is THE go-to guy for cruisers visiting Trinidad.  He runs tours and shopping trips for cruisers with his fleet of five minibuses.  Besides that, he is the master facilitator.  No problem is too large for him to help solve, and it seems that he knows everyone on the island.  Unfortunately, when we arrived he was busy with a big job in another area of the island.  We went to his office daily, arranging tours and outings with his wife, Sharon Rose.  It became a standing joke that Jesse didn’t really exist, he was just the mythical face of the business.  When he finally appeared, we all had a good laugh.

Carnival here isn’t just for a day or two.  Some say that it is the third largest Carnival in the world, behind New Orleans and Rio.  Words alone can’t describe the two weeks leading up to and culminating with Fat Tuesday.  We attended the Junior King and Queen competition, a 6-hour marathon featuring elaborately costumed boys and girls separated by age from 2 to 16 years old.  Another night, we visited several “Pan Yards,” where various steel bands ranging in size from 20 to over 100 drummers practiced for the big competition.  Another evening took us to a costume shop, where workers fabricated costumes for the locals who played in various bands during carnival.  Made to order, some of the costumes were priced into the thousands of dollars ($TT).  (So, let me digress for a moment here.  There are many “bands” which march in “Pretty Mas,” which is the big parade on what we call Fat Tuesday.  The bands range in size from a few hundred to six or seven hundred.  Each band has a theme, so the costumes that are worn by the players all conform to that theme.  You may pay upwards of $1,500(TT) or $200(USD) to march (or play) in that band.  What you get as a participant is 4 semi-trailers: one with the hugest sets of speakers and amplifiers that you’ll see short of a rock concert, one with an endless bar (mostly serving beer and rum (150 proof) punch), the next is the food truck, lastly there’s the trailer loaded with porta potties.  Security details surround each band to help keep a modicum of control.  Picture band after band moving down the street, music cranking to the point that you need earplugs, stopping at four judging points along the 5-mile route all day long.  In between judging points, there’s a lot of winin’ and chippin’ going on.  The competition for the King and Queen of Carnival was another marathon which extended well past midnight.  The costumes were beyond incredible.  The semi finals for the pan band competition lasted a good eight hours, but we wimped out after six, just before 1:00 A.M.  So, you see, the lead up to Carnival was quite rigorous for us middle-aged cruisers.  I said nothing of the “Fetes,” which went on around the island virtually nightly (I say nightly, but the Fetes usually start around midnight or so and last until midmorning.  Pronounced Fet, these parties usually feature live music and lotsa’ adult beverages.  Some were attended by upwards of 10,000 people.)

Monday morning, J’Ouvert, or “Opening of day,” A.K.A. “Dirty Mas.”  There was no way that Suzanne and I were not going to participate.  You don’t need costumes for “Dirty Mas.”  In fact, the less the better.  You join a band, (ours had around 400 people) pay your money, put on some clothes that you don’t mind being trashed, show up at 2:00AM and start the parade.  Our 4 semi-trailers were ready to go, so off we went.  It’s Dirty Mas, because along the way, paint, mud, and chocolate are flying.  By the time 9:30AM rolled around, we looked like walking rainbows.  After seven-and-a-half hours of strong rum punch and dirty dancing along our 7-mile route, I’m not sure that my feet were even hitting the ground, but what happens at Carnival stays at Carnival.  We coerced Paulette, John, Carol, Ken, Sylvianne and Ken to join us, but that’s their story to tell.  We all recovered sufficiently to be back in Port of Spain the following morning at 7:00 to be observers for “Pretty Mas.”  The costumes were incredible, the excitement level built during the day, and by the time we bailed at 5:00 PM, it looked like it was going to be another long night.  All right, let’s address the 500-pound gorilla in the room.  There IS a lot of crime here in Trinidad.  The poor economy, due in part to the low price of oil is not helping the matter a bit.  It’s very important to be aware of your surroundings at all times and stay out of certain areas.  That being said, aren’t those precautions important anywhere?  Trying our best to adhere to “Alizann Rules,” i.e. not being far from home at night, not flashing a lot of cash, and not wearing jewelry makes us feel a bit more comfortable here.

After Carnival was over, the eight of us headed to Asa Wright Nature Center and Lodge, located in the north rainforest.  Our diet hadn’t been bad enough during Carnival, so we stopped at one of Jesse’s favorite roadside stands for some Trini Streetfood.  The Saheena was to die for.  The Roti, doubles, and etc. weren’t too shabby either.  Winding up to 2,000 feet above sealevel through the rain forest, the road narrowed to 1 ½ lanes in places.  Rounding one corner, we came across a well-kept little home.  In the carport, a lady had a 12’x12’ tarp laid out, covered with a medley of hot peppers.  Red, orange, yellow and green, glistening from their recent hose-down, they made for a real Kodak moment.  We got out of the van and chatted with her and her husband.  She makes hot (peppah) sauce for some of the local markets.  On Sunday, the carport is transformed into a church where her husband preaches the Gospel.  Cool.  Back on the road, Asa Wright’s main gate soon came into view.  The lodge consists of the original manor house and several outbuildings, accommodating up to 50 guests, on 200 acres of wildlife conservation area.  There, we had three days and two nights of quiet relaxation, hiking and bird-watching.  Suzanne and my room, one of 2 guest rooms in the manor house, afforded us easy access to the dining room, and the veranda which overlooked a dozen or so bird feeders as well as a several-mile view of the forest valley.  Guides were always available on the veranda to help identify any of the 170 species of birds found there.

Well, just about time to wrap this one up.  We headed back to Alizann, packed some winter clothes, and headed to Michigan to await the arrival of our newest Grandchild, Nash Joseph Wells.