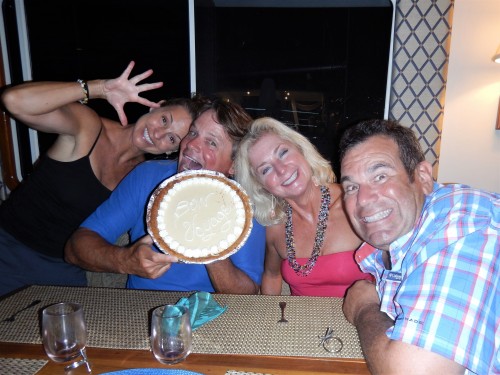 Here in the islands, it’s very poor form to neglect greeting someone, even if just passing on the street.  A little bit different than back in the States.  “Good day, everything okay?, you good?”  Then, you’d better be ready to chat for a minute (or ten) with a total stranger.

It was a good thing that we headed to Carolina with an extra bag-lotsa boat parts to bring home.  Kurt’s partner, Richard was waiting for us at the airport when we arrived in St. Lucia.  We took a leisurely ride back to Rodney Bay, stopping at a scenic overlook on the windward side, and the “bread man” in the interior.  Baked in a traditional stone oven, the 8 inch loaves were split and slathered with butter and slices of cheese while still hot.  Richard looked the other way as we ate in the backseat of the minivan.  (Just what we needed after all the food and drink over the holiday).  Back at the ranch, the Girl looked good.  Zim had looked after her while we were gone, even watering Suz’s plants.  They looked better than when we had left.

Over the Holiday, I had talked to Jeff, on Idyll Time.  He and Suzie had just gotten their boat surveyed for their insurance renewal.  In the course of the survey, a small leak was noticed in…….Guess what?  The gennie exhaust elbow.  Time to face the music.  Easy(?) jobs always seem to grow in scope as you’re working through them.  One of the screws holding a flange was buried behind the shore power cord bin.  Only the shorty screwdriver would fit-my hand wouldn’t.  Grrrhh!  Sweat, swear, sweat, swear.  Repeat.  Screws out, flange won’t budge.  Chinese 5200 (permanent adhesive) under the flange and around the elbow.  Repeat sweat/swear mantra.  Fetch 4 pound sledge.  Satisfaction.  When the elbow was out, the cause of the problem was evident.  A faulty weld had allowed the stainless steel to corrode, and there WAS a small leak in the tubing.  One of the legs of the new fiberglass elbow not long enough, and another problem discovered with the original installation.  Time for a re-engineer.  Incredibly, Island Water World had some fiberglass tubing.  JB Weld, a couple coats of glass matting and some epoxy followed by a coat of black paint, and the new bits were ready for install.  Channeling MacGyver? Guess the dues were paid on the removal, ‘cause the install went super smoothly.

Suz and I had been commiserating over recoating our brightwork (teak caprails).  The teak still looked good, but we knew that it wouldn’t be long until the epoxy coating (Awlbrite) began to fail.  After procrastinating for a month, we hired Tony and “Friend” to do the job.  It sure felt good to have that project off our plate, as we had both dreaded the prospect of taping, sanding, coating and etc.  Oh yeah, we had to move the boat so that the guys would have access to the port side, and as we were moving the Girl, Suzanne heard a new and strange noise.  We finally determined that it was the raw water pump for the oil cooler.  I thought that it’d always sounded that way (see: Delusional thinking).  Nope, “That’s new” says the Admiral.  Check spare parts spreadsheet-Yep, got one of those.  Yada, yada, yada.  They say that one of the definitions of cruising is “working on your boat in exotic places.”

My sad story is done for now.  I’m sure that it really choked you up.

Gary and Tori came in shortly after our return in anticipation of starting the first leg of the ARC around the world rally, so we had more playmates.  New Year’s Eve saw a cruiser-organized wine tasting dock party on the tee head next to our boat.  Local hikes, including a stroll up to Fort Rodney on Pigeon Island kept us occupied for a few days.  We had eight dive days with Dive St. Lucia.  They have a great program.  A two-tank dive with lunch in between dives off a well maintained, open transom 46’ dive boat costs around $100 (U.S.) a head.  The crew is well trained and very enthusiastic-we love ‘em.  Suz headed back to Ann Arbor in the States for a few days to attend Ali, our daughters’ baby shower.  While she was gone, I had a chance to replace that pesky pump, and do a thorough cleaning on Alizann.  From the flybridge to the bilge, everything was removed from its’ hiding place, cleaned and replaced.  Stopped counting at 29 hours.  (I know, sob, sob, sob!)  The good news was that I ran out of time, so hired Gazza and Peter to wash, wax and detail the outside.  It took the two of them two full days, which of course was stretched to occupy the better part of three-and-a-half to get the job done.  At the end of the workday, we sat in the cockpit of Alizann sipping cold beverages and rappin’.  Gazza is a Rastafarian, and we had some spirited discussions on religion.  Gazza had some very unambiguous opinions on both.  I thought it was a dealbreaker when I told him that Suz and I were Catholic, but serendipitously, a guy came by in a dinghy after just having lost his chain and lock in the water.  When I dropped everything, donned my mask and snorkel and found the lost goods, Gazza decided that I was a righteous man and let the Catholic thing slide.  Whew!

Shortly after Suz returned, Rob and Cindy on “Avventura” (Grenada pals) came back to their boat from a holiday trip to the States.  The weather was so cold in Kansas City, where they live, that some pipes froze and burst in their home.  Maybe one of the few things more expensive than boat repairs is hiring a plumber on New Year’s Day.  This boating thing is so hard to describe, but the intense friendships that you develop and renew periodically are one of the attractions for us.

Too soon, it was time for the World ARC to leave.  After years of preparation and planning, Kim and Zim on Someday and Tori and Gary on Solitude dreams were about to come to fruition.  You can follow these two boat and others on www.worldcruising.com.  As the last days before departure wound down, their moods changed and the tension was palpable.  After all, this wasn’t a 3 or 4-day passage.  They were leaving to go AROUND the world.  Two nights before departure, Suz broke the tension with a “Bon Voyage” meal aboard Alizann.  The “Four Cheese, Drunken Sun-Dried Tomato and Spinach Pasta” casserole, washed down with a few bottles of French red and white pop was delicious.  Dinner was capped with a homemade Key Lime pie, Godiva chocolates, and orange-infused rum.  Yum!  After the forty World ARC boats left the marina, it was pretty quiet, but no worries.  John and Paulette, aboard Seamantha, were soon on their way from Martinique to join us for our Trinidad/Tobago excursion.

Internet is spotty.  I’ll try to bounce some pictures into space when it gets better.