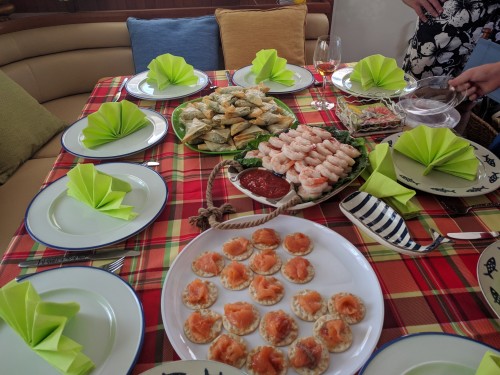 So, let me say a few words about Marigot Bay.  This is an extremely sheltered, nearly round bay surrounded by tall headlands rising to nearly 600’.  The narrow channel leads out to an anchorage which has a few mooring balls, and room to anchor.  The inner harbor has many mooring balls and a dock running along the shore with room for about 25 boats to Med-moor (stern-to, bow tied to a lead line away from shore).  Both the moorings and the dock are owned by Capella Resort, which is adjacent to the bay.  The good news is that as a marina customer, you have access to their two swimming pools and spa.  Dockside power is European (240V, 50Hz), but they had a small converter which allowed limited power for 2 or 3 North American boats (220V, 60Hz).  This allowed us to keep our batteries charged, and run the A/C in our stateroom at night.

Day two dawned bright and sunny.  The Admiral went for a ninety-minute massage while I chilled at the boat, taking care of some odds ‘n ends.  John’s brother and sister-in-law flew in from England for a 3 week visit on board Seamantha.  The afternoon had me peelin’, slicin’, and dicin’, while the Admiral handled the skilled job of prepping food for our Thanksgiving celebration the following day.  Aboard Seamantha, Paulette was continuing her preparations, which had already been in process for a few days.  Later in the day, the rest of the U.S. Thanksgiving gang cruised in.  Randy and Theresa, along with their two boys Ryan (12 years old) and Ronan (10 years old) docked their 54’ SeaRay, “Pilot’s Discretion” down the way.  John and Paulette had met them a couple of years before when docked in Grenada for the Summer.  Randy is retired from American Airlines after serving stints as Bob Hope’s, then Clint Eastwood’s private pilot subsequent to a stint in the U.S. Coast Guard.  Theresa is an attorney on sabbatical, as they have been cruising for 3 years.

It wasn’t Thanksgiving with the family and Detroit Lions football on the tube, but it sure weren’t bad.  Appetizers and sips started at Noon, and we pushed away around 16h00.  John started us out with some French white pop.  Smoked salmon (brought by John’s family from Scotland), Paulette’s homemade Spanakopita, and steamed shrimp got the party started.  Then the real fun began.  I’ll just give you the list:  Roast beef; Turkey; mashed potatoes (of course!); roasted vegetables; roasted Brussel Sprouts; roasted Sweet Potatoes; Onion casserole; Cranberry and Orange sauce; gravy and stuffing, all washed down with a red(?) Sancerre.  Dessert put us over the top:  Pecan pie, Chocolate cheese cake; ice cream; and stewed fruit with whipped cream were all on the menu.

We didn’t waste a minute during our weeklong stay at Marigot.  The day after Thanksgiving, John and Paulette arranged for Curt Joseph (a.k.a. Island Man) to take us on a tour of St. Lucia.  He picked up John, Paulette, Michael, Wendy, Suzanne and I at 09h00, and we didn’t return until after dark. We visited Tet Paul Nature trail first.  There, our guide took us along an easy trail, identifying local plants and trees along the way, culminating in a spectacular lookout which overlooked The Pitons (Gros and Petit), two extinct volcanic cones, which are St. Lucian geologic icons.  Next stop was the Diamond Botanical Gardens, where we spent a couple hours strolling the paths.  Our guide did a superb job of identifying and describing the uses of the myriad of plants there.  We took a late lunch at “Fedo’s” restaurant, located on one of the back alleys of Soufriere.  We never would have found it on our own, but Curt said that he wouldn’t eat anywhere else.  After lunch, we could see why.  Then, it was off to the Soufriere volcano.  We were the only tourists there, as it was late in the day, so we had our own personal guide.  We walked the boardwalks over pits of boiling mud through tendrils of sulfur-laden steam which had bubbled up through the Earth’s crust.  Cool.  Afterwards, we visited the “Volcano Museum”, which provided some rudimentary facts.  At sunset, we walked the beach outside the town of Soufriere, viewing Gros Piton one last time, from a different angle.  It was a long, sleepy ride home.  We all agreed that Curt was the man.  He picked us up early enough that we were ahead of the busses filled with cruise ship passengers, timing lunch so that they could pass ahead of us, and finished our tour after they were on their way back to their ships-perfect!  The next morning Theresa and the boys led Suz and I on a hike that almost literally went straight up through the forest to a 630’ peak overlooking Marigot.  As we were scrambling up the path, at times aided by ropes strung along the side, and starting mini slides of loose stones, I have to admit I was worrying about how we’d get back down.  The view from the top was well worth the climb, and a different path, this one winding down another face of the peak took us back down.  We enjoyed pizza and a few sodas while the boys played pool at “Doolittles” before taking the little ferry boat back to our side of the harbor.  That evening, Suz and I had dinner at “Masala Bay,” an exceptional Indian restaurant located right at the marina (the Seamantha and Alizann crews managed to wedge in 2 lunches there during the week too).

It’s funny how inertia can grab ahold of you.  When Suz and I are on the move, we can’t wait to see the next anchorage.  When we pull into a marina and stay for a while, it gets tough to move along.  I guess that we just get used to the routine……… Anyway, it was time to get on up island.  On Tuesday morning, the crews of Alizann and Seamantha pushed off for the 5 hour hop to Martinique.