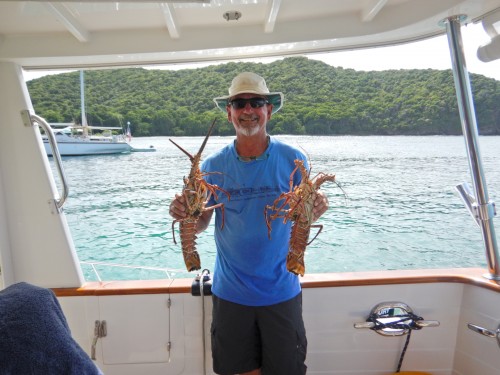 Reluctantly, we upped the anchor in Chatham Bay, Union Island at 09h00 on the 15th of November.  An hour later, we entered the anchorage at Salt Whistle Bay on the north end of tiny Mayreau (population 250), another island of the Saint Vincent and the Grenadines archipelago.  It’s a very popular, but small anchorage on the northwest corner of the island.  If it was full, we planned to head a few miles south, and toss down the hook in Saline Bay, at the south end of Mayreau.  That wasn’t our first choice, as the ferries and small cruise ships use the commercial port there.  As luck would have it, a boat was just dropping a mooring ball as we entered the harbor (it also happened to be the one that we would have chosen if the whole mooring field had been empty.  Our “Boat Boy” du jour, “Fifty Cent” guided us in and took our lines, helping us to secure the Girl to the mooring.  (Of course, we could have very easily secured ourselves, but the Boat Boys plying the anchorages in their little pangas really need the work on these islands where there’s very little opportunity for employment.  They really hustle-good for them!)  The bay was separated from the Atlantic by a low, sandy spit covered by palm trees.  We had a nice breeze, but virtually no waves.  We brought the dinghy to the sandy shore and anchored it in 3’ of water.  Crossing the spit, we had a nice mile-and-a-half walk down the deserted sand beach on the windward side.  The remaining few hours of the afternoon afforded me the perfect opportunity to give the Girl a good bottom cleaning.  Two hours, and one broken putty knife later, her backside was smooth as a babies…  The next day, it was time to stretch our legs.  We walked the island loop, which took us over the top and down into Saline Bay.  High above Saline Bay, we stopped at the Catholic church.  On the walkway looping behind the church, we were treated to a beautiful view of the Tobago Cays, some seven miles distant.  The first part of our walk was on pavement (although we never saw a vehicle).  The way home took us past the island dump to the windward (and uninhabited) side of the island.  The trail wound along the coastline, meandering through grassy highlands, rocky shoreline and mangrove groves.  Not a well-travelled path, we backtracked several times to find our way, and bushwhacked through deep growth, finally ending up at the end of the beach that we had tramped the day before.  After 5 miles in the hot sun, we lolled in the knee-deep water off our anchorage’s sandy beach in bathtub calm, 85-degree water.

After two days at Mayreau, we were off to our old stompin’ grounds in Port Elizabeth, Bequia (another island in SVG).  We were looking forward to meeting up with our friend, Donnaka (See hiking in Bequia from April or May 2017).  We also had a load of swim suits and goggles for the Bequia swim team which we’d hand off to their coach, and our friend, Tyrell Olivierre.  Well…..the four days in Bequia went quickly.  We met up with Donnaka, who regaled us with stories from his recent two-month walkabout in South America.  It just fanned our already simmering fires to spend some time there next year.  Our friend Ken (“In Dreams”-from Grenada) arrived, so we spent some time bangin’ around with him.  We did a couple of dives with “Dive Bequia,” enjoying a couple of surprisingly nice sites, accompanied by James, our boat driver, and Max, Divemaster.  The morning dive, it was just Suzanne and I, in the later dive, just another guy and his daughter.  Max and I speared a dozen-and-a-half Lionfish, giving us enough for a nice dinner, leaving a dozen for Max.  I say that the dives were “surprisingly nice” because I had read a review online that said that the reefs here were disappointing.  Not so.  The corals appeared to be as vibrant and healthy as any that we’ve seen here in the Windwards.  The number of lobster that we saw was off the charts.  We met up with Ty and the swim team and they were delighted with their new goodies.  Ty confided that the girls especially were embarrassed at their competitions, as they didn’t have (couldn’t afford) proper racing suits.  Well, they’re gonna be stylin’ now.  Suzanne picked out the most colorfully patterned Speedos that she could find, in a variety of sizes (Ty sent us size requirements in an email during the Summer).  Four days went too quickly, but it was time to get on up to St. Lucia to join Paulette and John (aboard Seamantha) for Thanksgiving.  We had the turkey in our freezer, so our absence would’ve been noticed.  Before we left, I got out the pressure gauge, and handheld tachometer, and got our recalcitrant hydraulic oil cooler into spec.  (It wasn’t).  I figured that the next leg would be a good test.

The anchor was shipped by 05h35 for our anticipated 8-hour trip to Marigot Bay on St. Lucia.  On the way, the Girl got a nice salty coating from short period, 2’-4’ seas on the starboard bow.  We caught a little (24”) Blackfin Tuna along the way.  More importantly, we had NO hydraulic system overheats.  Maybe we’ve got it licked (knock wood).  At 14h15, we backed into our Med-moor slip between Seamantha and another vessel, under Paulette and John’s watchful eyes.  After a quick washdown of boat and crew, we joined our pals for sips and stories, as it had been nearly 7 months since we had seen each other.