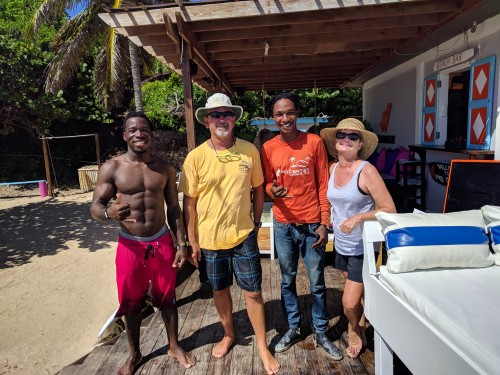 We glided into Clifton Harbor at 13h25 on the 7th of November.  Within minutes, we were at “our spot” in the northeast corner of the anchorage near “Kiteboard Beach.”  Well…. not exactly “our spot,” as there was a rather ratty-looking catamaran parked right over our old GPS fix from the previous Spring.  As usual, Suz was driving, I was handling the ground tackle on the bow.  I came inside to confer with the Admiral on the next best spot to drop the hook, when Suz said “Did you see that?”  “Yeah, those guys are right in “our sp……”.  Really?  None of the four guys sunbathing on the deck had a stitch on.  After a quick conference, we decided to drop our anchor at their midships so that The Girl would lay well off the German Nature Boys’ stern (their boat).  We tidied up the boat and got the dinghy deployed about the time that the Canadian couple on the sailboat behind us returned from shore on their tender.  After an animated discussion between the two of them, he came out to his bow, pacing in an obviously agitated manner.  Uh Oh.  I went over for a chat, and was informed that I was anchored on top of his chain.  When I asked him how much chain he had out, he growled “40 meters”.  One hundred twenty-five feet in ten feet of water?  Seemed rather excessive to me.  We had fifty feet out, anchored in a sandy bottom, behind a sheltering reef.  I told him that I really didn’t think that we had a problem, but that I’d be happy to swim his anchor, then mine to make sure.  As he glowered from his foredeck, I did just that.  Our hooks were around fifty feet apart, neither upwind of the other.  Somewhat mollified, he semi-stomped back to his cockpit.  Time to clear Customs, so we stopped at their boat to introduce ourselves and ask them if they needed anything from shore.  Curt “No thanks,” no names.  Sometimes it’s just that way, even here in paradise.

Over the next five days, we resumed our kiteboard lessons, graduating from the shallow waters off Kiteboard Beach to the deep water off Frigate Island.  The first and second days, we progressed nicely.  Suz took the third day off to rest.  I thought that I had some catching up to do, as she was learning quicker than me.  BIG MISTAKE!  I was tired too, but didn’t realize it.  I backslid bigtime.  By the end of the session, I was totally ready to quit.  (I’m not sure that I’ve ever quit at anything).  Next day, Suz had a morning lesson.  She had the deep water starts perfected, and was going well in one direction, pretty good in the other.  I was happy that she was progressing so well, but had to tell her that I was more than a little bit jealous, and pretty upset by the difference in our progression.  We had lunch on the shore with a bunch of younger boarders, as well as the owner of the school, Jeremie.  They all praised Suz for her accomplishments, and offered me some “buck up” anecdotes (they had all been watching our lessons for the past few days).  I had determined that I was done with the boarding thing, but hadn’t told anyone yet, when Jeremie (the JT Pro Kiteboarding owner) took me aside.  He shared that it took him a long time to get going at first (probably a lie).  More importantly, he told me to just relax.  He related that men had a tendency to use too much muscle and try to overpower the kite and board, but that women learned much faster because they just “went with the flow”.  Okay, I could see that.  I’d seen that learning how to snow ski at age 32.  I was still in a funk, and was going to quit anyway, when a French guy who was doing aerials, and all kinds of tricks earlier gave me the talk too.  He said that his wife was up and boarding in three lessons, whereas after his eighth, he was just starting to get up on the board.  Well, with all those folks in my corner, I couldn’t just walk away.  Zen kiteboarding won the day.  Everything suddenly got easier, and we ended the afternoon in smiles.  I don’t look pretty (but then again, I never have), but I’m driving the board in both directions, and we’ll be back.  Suzanne and I think that our instructor, Butter, and our boat driver, Marlin, are the best.  Jeremie, we’ll be back.

It wasn’t all work and no play in Clifton.  Onshore, we went back to “Yummy’s Bakery” for Rose’s Roti, and Zoey’s (Jeremie’s wife) “Snack Shack” for a wonderful lunch.  The open-air market supplied us with fresh fruit and veggies.  Cocktails happened a couple of evenings at the “Anchorage Yacht Club”, and “Bougainvilla”.

On the 15th, we moved up the west side of Union Island to Chatham Bay.  What an idyllic anchorage.  A crescent-shaped beach rings the bay, and there is good holding for the anchor throughout.  We dropped the hook away from all other boats (there were 8 in an anchorage large enough for 70, easily).  Soon enough, we were approached by a guy in a panga hawking his restaurant on shore.  He also told us that we’d be getting some swell during the night if we remained anchored here.  He motored on, and after a bit of discussion, the Admiral and I hauled anchor.  Seckie reappeared, and led us up to a spot in the northeast corner of the bay, and indicated a good spot to drop the hook.  Uncharacteristically, he didn’t hang around for a tip, just motored back to shore.  Long story short, we radio’d him on the VHF, ordered two grilled Red Snapper dinners, and headed in to the beach an hour later.  We met Seckie’s girlfriend, Vanessa.  In her small kitchen(?), she cooked the sides, while Seckie grilled the fish over an open hearth.  Their power was supplied by a generator, as there were no power lines down to this isolated bay.  The food was delicious.  As it turned out, Vanessa was a jewelry artist, creating necklaces and bracelets from beach glass and sterling silver.  Suz picked out several (it’s almost Christmas), and asked Vanessa to hold them until we could come back tomorrow with more $$$.  Nope.  She said take them and come back tomorrow when we get here.  Next day was a hike day.  We got to shore and hit the trail after a false start which took us down a rutted, muddy road.  Elton, a local fisherman, called out to us, and directed us to a path through the bush that would take us out of the wet lowlands and up a steep trail through the bush to the peak of the mountain.  He did want a tip, and wasn’t shy about asking for one.  We scrambled up a mile-long trail that rose some 600 feet.  On the way up, we met “Shark Attack”, who was walking down to his shack on the shore of the bay.  For the next twenty minutes, standing on the steep trail in the middle of the rain forest, we had a spirited discussion on the politics of SVG (I guess I should say that we mostly listened while he talked).  As we broke out of the bush onto the paved road, we continued on our 5-mile jaunt, which took us up to the Digicel tower, the village of Ashton, and out to the point overlooking our bay, (where we met “Bushman”, another local figure along with “Shark Attack”, about whom we had read in the cruising guides), eventually ending up back on the beach, where our dinghy was tied to Seckie’s dock.  As I crab-walked down the steep, gravel-strewn trail form the tower, I rubbed my hand against a piece of plant lying on the rocks-oooh!, that kinda burned.  When we got to the bottom, Suz reported that she had brushed her leg against some brush with the same result-thought that she’d been bitten by a bug.  After a half hour or forty-five minutes, the burning subsided.  Even though we were on a paved road, we never saw a motorized vehicle.  Another trail took us on a circuitous path back down to the bay.  We walked the beach to Chatham resort at the south end of the anchorage.  It’s a secluded, exclusive resort, with a total of 3 little guest villas, all made of stone.  With a small swimming pool and the beautiful beach, the resort would be the perfect “get away from it all.”  We had ulterior motives.  After 2 Cokes, we had secured the WiFi password, giving us coverage on the boat.  Alas, we were too far away to connect, even though we could “see” the network.  The $10 glasses of Coke tasted good all the same.  Walking the beach back north, we passed the dinghy, heading to Shark Attack’s shack to inspect his collection of wood carvings that he was selling.  He is really quite talented, but the boat will only hold so many knickknacks.  More political commentary ensued, and we learned that the 15 or so people living on the beach were all squatters, and that sooner or later, the government would probably sell this gorgeous waterfront land, and give them the boot.  BTW, we showed Shark Attack a picture of the nasty plant that we had encountered.  He identified it as “Burn Bush”, as he had ministered to many crying young victims over the years.