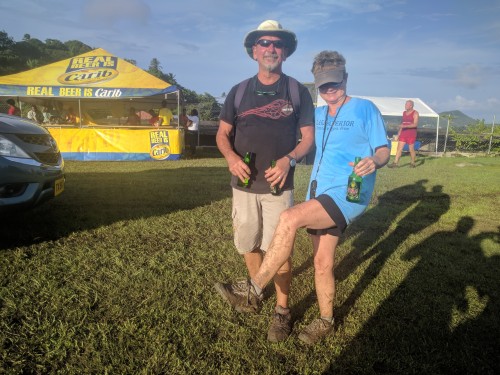 Sooo…. Grenada has a very active chapter of “Hash House Harriers”.  (The H3 is an international group of non-competitive runners, commonly described as “drinkers with a running problem”.  The group originated in the Federated Malay States in 1938 by some British colonial officers to combat post weekend hangovers).  Anyway, instead of avoiding this group, as we had been sagely advised (by one who had dislocated a shoulder, and another who had broken an ankle while Hashing with this group), we decided to join them in celebrating the Grenada chapters’ 1,000th Hash.  We took a cab up to the north end of Grenada, found the location, and signed up for the course that was right in the middle of the 7 trail choices of varying difficulty.  Our trail led us up and down through the tropical rain forest.  In places, the trail was so steep that you had to pull yourself along on brush growing alongside the trail(?).  In others you had to hold on for dear life as you slid downhill on Teflon-slick mud (which covered the trail from start to finish-Hey, it’s rainy season, and we were up north).  The trail crossed several streams, and in the muddy lowlands, many a shoe was sucked off the unsuspecting participant.  After a couple of muddy, sweaty hours, we finished unscathed, except for a bit of mud (especially our backsides).  The beer was cold and cheap (3 for $12EC).  Afterwards we enjoyed the festivities, including music and fun with the nearly 400 other participants.  Unfortunately, they ran out of tee shirts in my size.  Suz was able to score one, though.  The hour-and-a-half ride home was looonnng!

We continued to check boat projects off the list, while enjoying the company of our fellow cruisers at Port Louis.  Suz and I fell into a routine of heading over to the salt water pool in the early evenings to get in some much-needed exercise swimming laps.  Of course, it helped us cool off after the hot, humid days here in Grenada.  Our awning project remained unfinished, but hey, we had a few more weeks ‘till departure.

Saturday, the 14th of October.  We were headed over to Eco Dive with our friend, Ron by 08h00.  This was the last day of the first annual Dive Pure Grenada week, a week-long celebration of scuba diving in Grenada.  We headed out to the reefs up north to hunt Lionfish.  These beautiful, but nasty little guys are the bane of reef fish from South America all the way north to Maine.  They are an invasive species, native to the South Pacific, and have no natural predators in this hemisphere.  Voracious eaters, they can wipe out whole populations of reef fish, especially the juveniles.  Our mission, along with divers from eight other dive operators here is to bag as many of these bad boys as possible.  We’ll take our catch to Coconuts, a restaurant on Grand Anse beach, where Pat’s crew will cook them up for our dinner tonight.  We dropped over the side, and as we passed through 95 feet, we realized that maybe were in the wrong spot, as the reef was supposed to be at 45’-50’.  After this inauspicious start, the boat dropped us in the right spot.  With Suzanne doing the spotting, Ron and I speared around 15 fish.  The second dive site was much more productive for us-25 fish.  As I was jamming one of my victims into our carrier, I caught one of his spines in my thumb.  Didn’t hurt much at first, but as the venom spread, the feeling of intense heat spread down to my second knuckle.  Yeeouch!!  After an hour or so, it subsided with no ill effects.  (As a protective mechanism, the Lionfish has some 18 venomous spines, located in front of their dorsal, pectoral, and anal fins.  They don’t attack with them, but if one happens to catch you, it’ll really get your attention.  If you mount an allergic reaction, it can be fatal) When we surfaced from the second dive, the wind had come up and whipped the sea surface into a froth.  It rained sideways all the way home, and for a change, we were all cold.  The weigh-in told the tale-our six shooters had netted a little over 80 pounds of fish.  All told, the 9 boats participating took 401 pounds of tasty Lionfish.  That evening, we were joined by other divers at Coconuts for the closing presentations of the first annual dive week.  The assistant minister of tourism gave a short talk, declaring the week a success.  Awards were given to the winners of the underwater photography contest as the photo entries streamed along on a large screen.  Afterwards, live music was provided by a local band, “Solid.” The chefs prepared the fish as a curry, baked with butter and garlic, as a Creole stew, and breaded with panko and deep-fried.  Our table ordered all styles and shared.  The light, white filets lent themselves well to all the preparations, and washed down well with Rhum Punch.

On Monday morning, Dan, Melissa, and Margrite joined us on the number 1 bus to St. George to visit the fort .  Besides changing hands (France and Great Britain) several times in the 18th and 19th centuries, the fort has 20th century significance.  It was there, in 1983, that the Prime Minister, Maurice Bishop, and seven others in his government were executed by the military and other factions of his party, precipitating the intervention by the United States.  Of course, after touring the fort, then the Grenada National Museum, we had to drop by the Chocolate Museum for chocolate shakes.  It was really hot outside!  We got a line on lunch from a local kid, who said that “Rin’s” had good, cheap Roti.  We found the place, but peering through the locked door, it didn’t look promising-basically a 7’x10’ space with a card table in the middle.  No signage, but we suspected that someone might show up at Noon, 10 minutes away.  Sure enough, at around ten after, a couple came down the sidewalk carrying a couple of insulated boxes.  After unlocking the door and plunking the boxes down, they were open for business.  The fare included Chicken, Veggie, Beef or Fish Roti.  Suzanne and I both ordered Chicken.  We wandered down to the water and found some picnic tables in a square by the cruise ship dock.  Eating the Roti was a challenge, as bones were included, but for $10EC ($3.70US), we felt like we did okay.