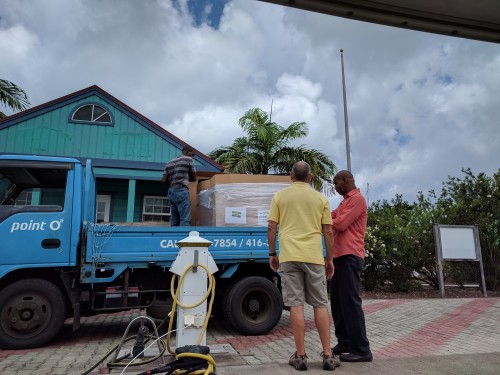 The flight back went smoothly, arriving in Grenada at 14h30 after changing planes in Miami.  The Girl was happy to have us back, although she had been well taken care of in our absence.  Randolph and the guys from Island Dreams had kept her clean inside and out, as well as checking on the dehumidifier/air conditioning.  Brett Fairhead’s guys kept her bottom clean, diving her once a month.

The next morning, it was “hammer time”.  Our shipping container had avoided the hurricanes, and Tropical Shipping notified us that it was in the warehouse at the port.  Suzanne contacted Ricky Telesford, our shipping agent, to get things moving through Customs.  To her surprise, he said that everything was already in order, and that he could drive his truck up to the boat and deliver the next business day.  (Just lettin’ you know that this didn’t happen without plenty of effort by the Admiral.  She had emailed receipts for each and every item in the container-a hundred or so, to Ricky weeks before.  Even so, friends had told us that it might take days/weeks to move through Customs).  None of the welding had been started, even though we had met with the welder before we left.  None of the canvas work had been started.  Hey, we’re in the islands.  Problem is, the end of Hurricane Season is the busy time for these guys (which is why we gave them jobs in the Summer).  Several calls, texts, emails to each of them, and we got responses from both, who assured us that they were “just getting around to it” (more or less).  We got in a quick provisioning trip to Foodland, and joined Paul and Sue (Suzanna Aqui, our marina neighbors) for dinner at Victory’s, the marina restaurant, for Barbeque Night.  Over the weekend, we joined Ron, and his wife, Judy for a snorkel trip to the underwater sculpture park, the reef off the Grand Anse beach, and lunch at the L’Anse aux Pines resort.  Ron is the manager at Island Water World, the local boat supply shop, and has the use of the company boat, a 20’ rigid inflatable with a 60 horse outboard.  Very nice for getting from here to there.  Nick, the welder, was true to his word.  His guys showed up on Monday to get going on the welding jobs.  They got the plates for the awning supports started, and said they’d be back the following day to remove the old solar panels.  Suz and I thought we’d keep them focused on the skill job, telling them that we’d have the panels off by the time that they arrived the next day.  All in all, the welding was done well, although it wasn’t the smoothest project that we’ve ever done.  Lots of poor communication and failed deadlines, but completed by the first week of October.  (In his defense, I think that Nick is an artist, not a businessman.)  The canvas guy, Clarke, -not so much.  Lots of no-shows, then he’d show for a few minutes right before dark, take a few measurements, and promise to see us the next day, only to no-show.  (no worries, we thought, not leaving for another month)  Well……the project dragged on.  Lots of excuses (never his fault) meeting at the kids school, car broke down, lost my phone, and on and on.  Would have fired him, but had prepaid him several $K for materials and some labor.

Suz and I got the new solar panels up, and I got the worst sunburn of my life.  I just went out one morning in my boxers to take a quick measurement or two.  Five hours later, as the last panel was going up, one of our neighbors, Torie, walked by and informed me that she could see my red back from the street.  I blistered and bled for nearly three weeks-what a dummy!  We pulled wire, and Nick fabricated a bracket for our new WIFI booster antenna which I installed at the top of our mast (Yes, I still hate heights-coulda’ used a couple Xanax).

Over the next few weeks, we spent a lot of time socializing with fellow cruisers on our dock, and seeing the sights on Grenada:

Saturday is “Market Day” in St. George, and a gang from the marina usually bussed in for fresh veggies and fish.  (to say nothing of a “breakfast beer” for Ken and Dan.)

Sundays started with Mass at the cathedral (never less than 2 hours) followed by Brunch at Whisper Cove marina with any of our neighbors that Suzanne could motivate.  We usually had a bus full.  Afternoons were occupied by the NFL (yes, El Cheapo popped for cable so he could catch some football games).  On alternate Sundays, we’d head over to Eco Dive on Grand Anse for a two-tank dive, usually with Ron (Judy had to return to Florida to work-long distance marriage works for them for now.  She’ll retire next year).  Post dive lunch at Umbrellas was always a treat.

Wednesday was “Pizza Night” at the marina restaurant.

Suz and I had heard from several sources that Cutty’s Tour was the way to see Grenada, so we signed up, talking Rob and Cindy, aboard “Aventura”, to come along.  Cutty picked us up in his air-conditioned van, and we were off on our day-long adventure.  By the time that the day was done, we had driven nearly the length of the island, visiting Grenada Chocolate Factory, Belmont Estate, Anandale waterfall, River Antoine rum distillery (where we had lunch in their restaurant), a nutmeg depot, and stopping numerous times to identify and/or taste local fruits and vegetables.

True to form, Suzanne cooked.  For Paul and Sue one night, she created a fantastic curry chicken stew that I had been whining about for weeks (having read about it in Ann Vanderhoof’s book “Spice Necklace”).  Another night, it was stuffed, grilled avocado for Torie and Gary. Still another, a special request from Ron put Suzanne’s famous enchiladas on the menu.

I passed on the girls shopping trip, but I understand that Suz, Melissa, and Magrite did some damage in St. George.

Besides the canvas from Clarke’s Upholstery, projects were falling off the “To Do” list daily.  Oh yeah, did I mention that it’s still the “Rainy Season” so any outside activities were punctuated regularly by torrential rainfalls, creating humidity readings in excess of 90% to go along with 89 degree temperatures.

That’s enough for now (maybe too much).