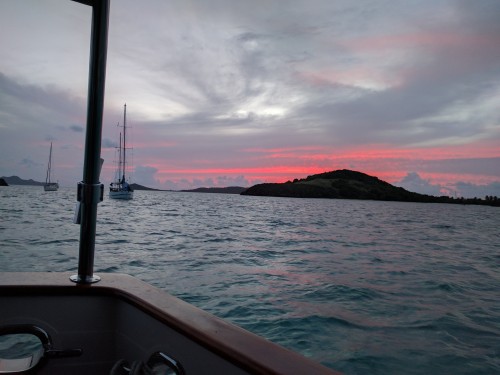 We were off the hook at Tyrell by 07h50, and had an uneventful passage to Grenada over 2’-4’ seas, with 21 knot winds on the beam.  The hydraulic oil cooling pump continued to give us problems, and the hydraulic system overheated a couple of times, necessitating trips to the engine room to break air locks.  The Xantrex charger/inverter also continued to shut down due to overheats, so we used the second unit, a Magnum without incident-another project.  By 13h30 we were at Port Louis Marina, in St. George Harbor, Grenada.  New experience.  We did a Mediterranean mooring there.  That is, we backed over a mooring ball around 70 feet from the seawall, attaching a line as we went by, and backed the Girl up to the seawall.  We secured the stern to the wall, and ran another line (making two) from the bow to the mooring ball, suspending Alizann between the wall and the ball.  We’ve done the Med-moor thing before, using our own anchor off the bow, but grabbing the ball, then backing in between two other boats with barely enough room for our fenders between was a big deal.  We get by with a little help from our friends.

The next ten days was a blur, lotsa boatchores.  We pulled the balky inverter out and took it apart.  It’s cooled by 3 computer fans, and 2 were completely defunct.  The third had funky bearings.  How hard could that be to fix?  From past experience, I know that nothing’s ever that easy, so we bought a new battery charger/inverter, did some modifications to mount it, some rewiring and carpentry work to place the new remote control panel, and called it good.  I figured that we’d buy some fans back in the States, repair the eight year old unit when we returned in the Fall, and keep it as a spare.  (All boats need three inverter/chargers, Right?).  Both of the motors received new oil and filters.  The transmission got a fluid change, then we flushed out the John Deere, the generator, and dinghy outboard engines with Saltaway and bedded them down for the Summer.  Washed, buffed and polished the Girl to help her resist the scorching Summer sun, and cleaned her interior, doing a final wipe-down with a dilute vinegar solution to help resist mold during the upcoming layup.  We covered the insides of hatches with aluminum foil to keep out the sun, unplugged all appliances to protect them from lightning damage, and set the air conditioners on “Dehumidify”.  All mooring lines were doubled, and chafe protection was placed to ready Alizann for potential high winds during hurricane season.  In between the scut work, we met with a welder and a canvas maker, whose projects would include modifying the solar panel rack to accommodate our new panels, and fabricating a sunshade for the boat deck.  While we were gone, the Girl would need attending to, so we met with Mark Sutton, owner of Island Dreams, whose company would check in on Alizann while we were Stateside.  Brett Fairhead’s guys would come by and clean her bottom monthly, keeping her free of barnacles while sitting in the warm, nutrient-rich water of the harbor.  Getting the Girl ready for Hurricane Season entailed removing anything from the decks that was loose, or could potentially get loose in high winds.  We had our bicycles and kayaks stored on land, out of harm’s way, and removed everything else that wasn’t fastened down.  The weekend before we left, Tropical Storm Brett roared through, causing cancellation of flights to Trinidad.  The high winds gave us a chance to see how the Girl would do in her mooring configuration, and we were pleased.

It wasn’t all work and no play for the crew of Alizann, though.  Ed and Cheryl on Slowdown were five boats down from us, and we also made some new friends in the marina.  Our immediate neighbors, Paul and Sue, aboard their 65’ Fleming motoryacht “Suzanna Aqui” were familiar faces that we had met in Gorda Sound in the BVI.  We had several enjoyable dinners both out and in (You know by now that the Admiral loves to cook for friends), but seriously we never got farther than a mile or so from the boat.  We figured that we’d do our island exploration after our return in the Fall.  Only too soon, it was time to leave Grenada and our new and old pals to return to the States.  Hector, our driver, picked us up in a light drizzle at noon on the ………., took us to the airport, where we boarded a plane for Miami.