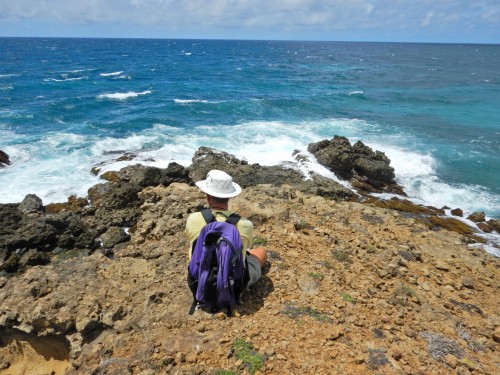 It wasn’t exactly a long ride from Bequia to Mustique.  We were on the mooring ball by 11h15.  Then we were off.  The Harbormaster wanted the phat Girl on a stouter mooring.  Okay, we can always use the practice.  So, you probably know that Mustique is a private island.  The unwashed masses are allowed to visit at certain times of year when the well-heeled are not present.  Boaters are allowed three days, and must take a mooring.  (The mooring fees are quite reasonable, though-$200 Eastern Caribbean for 3 nights).  Well, we didn’t see any celebrities, but we sure saw a lot of the island.  We hiked over 20 miles in 2 days, circumnavigating the coast, and crisscrossing the hilly interior.  The windward side of the island featured a rugged coastline, with dramatic views from cliffs down into small pocket bays and isolated beaches.  There aren’t a lot of them, but the homes that we saw (from a distance) were spectacular.  The going prices, once affordable at a million $ or so, are now easily ten times that much.  We didn’t spend a lot of time house hunting.

Being the off-season, the island was pretty quiet.  The first afternoon, as we were doing a quick recon of “town,” we stopped at The View, a restaurant perched on a cliff high over the harbor.  Well named, the open air dining room has a panoramic view of the harbor and surrounding sea.  Suz and I were the only guests until we were joined by Alastair and Fiona, fellow boaters on the s/v Busco Viento II.  British citizens, but living in California for the past couple decades, they cruise for several months a year.  They were bar-hopping by dinghy, and reported that they had just missed Bryan Adams (Canadian rocker) at their previous stop, The Cotton House Plantation bar.  Lisa, the owner of The View was chattin’ us up, and by the time that we left, we had reserved the prime table for dinner (Barbeque Night) the following evening.  The barbequed pork, beef, and chicken was delicious (or was it because we had hiked all day?)  The half-inch of rain that drenched the four of us in 10 minutes on the way to dinner didn’t dampen our spirits.  We just wrung out our clothes (literally), and carried on.  Another evening, over sips on our boat, they were intrigued by our flopperstoppers.  They took our extra one home, and were so impressed by it’s performance that they ended up taking it off our hands.

Three days went by in a flash.  We had heard of a new multimillion dollar marina that was being built on Canouan, so we decided to check it out.  The facility, Glossy Bay Marina, is to have a retail center, hotel, restaurants, and private residences in addition to the marina, which is equipped to handle megayachts.  The marina had just opened the previous month, and we were the only boat in the whole place.  The place is going to be gorgeous.  The man-made harbor is surrounded by a granite-capped seawall with nicely rounded edges.  Stainless steel power pedestals with both 50 and 60Hz electric service, as well as reverse-osmosis water are evenly spaced between substantial mooring cleats.  The marina is set up for Med-mooring, that is, stern-to, but they allowed us to side-tie as it wasn’t exactly crowded.  Acres of new plant material have been placed, and a gang of nurserymen were planting more by the day.  Excavators and bulldozers were moving dirt and placing topsoil out on the point opposite the Girl, while crane operators and construction workers hung steel and poured concrete for the retail center and hotel on the other side of the lagoon.  It’s very clear that no expense is being spared in the creation of this project.  Yanik, the dock dude insisted that we have a golf cart at our disposal, so he parked one right next to our boat.  It was a good thing, too, as the beach club, pool, and restaurant (Shenanigan’s) on the point between the marina and the ocean was about a half mile (by land) around the lagoon.  We played the first afternoon.  After a late lunch, prepared by the chef (not cook) at the restaurant, we lounged on the couches under the shade of the pergola near the bar.  Suz napped while I availed myself of the WiFi, continuing to put our website back together.  (You may have noticed that the site was a shambles for a few days, with most of the content gone.  We don’t have any idea how it happened, but I was literally sick when I discovered the mess that appeared where our website once was.  After exchanging a few frantic emails with Bill, our website designer, he worked through the weekend to get us back up and running.  We’ll have better backup systems in place from here on out-lesson learned.)

The following day was all work.  In anticipation of leaving the Girl for the summer, we have a lot of deep cleaning to do.  Mold and mildew are big problems during the hot, humid Caribbean summers, so the cleaner the boat, the better.  We emptied the lazarette.  Wow, is there a lot of stuff in there!  We cleaned every square inch with soapy water, then wiped down with a vinegar solution to kill any mold spores.  We laid out over a thousand feet of line on the seawall to bake in the sun.  After taking an inventory of the stuff, it was re-pack time.  We took a quick break, then Suz was into the front machinery space to give it the same treatment, while I headed to the engine room to fiddle with the hydraulic oil cooler again.  (Scottie suggested that I take all of the hoses off and check to make sure that none had delaminated and collapsed inside).  Well, the hoses all looked good, but I did find a fingernail-sized bit of tree bark in the hose between the thru-hull and the sea strainer.  I doubt that this was the problem, but we’ll see-fingers crossed.  I also re-routed one of the hoses for a more favorable angle out of the raw water pump.  By the time I was done, Suz was just finishing up.  We’ll do the remaining two bilge spaces when we “pickle” the watermaker, and prep the engine and generator for storage.  It doesn’t sound like much, but by the time we were done, we were whipped.  Showers, sips, spaghetti and meatballs (Yeah, Baby!), and about 10 minutes of reading in bed, and we were out for the count.  That is……….....until The Admiral jars me awake in the wee hours shouting “Someone’s on deck!”  Whoa, I didn’t even know what planet I was on, let alone what was happening.  However,…we had rehearsed this scenario many times, and the training kicked in.  Suzanne hit the panic switch that I had installed next to the bed.  All the deck lights popped on.  I had the “Bear spray” in one hand, and the axe handle in the other as I woke up on the run to the pilothouse.  Didn’t see anyone in the cockpit or side companionway, nobody visible on the bow.  Once outside, I saw no one up on the boat deck.  (If there had been someone there, I’m not sure what would have scared them more, my weapons or the sight of me in my birthday suit.)  In the end, we’re not sure if someone was outside, or if Suz, in a sensitized half-sleep (she had been awakened by a carful of partiers leaving the bar earlier) had heard one of the fenders rubbing against the hull.

We’ll head down to the Tobago Cays on this, the last day of May.  With the very un-Caribbean-like speed with which the construction is progressing, it’ll be interesting to see what this place looks like when we pass back through here in six months.