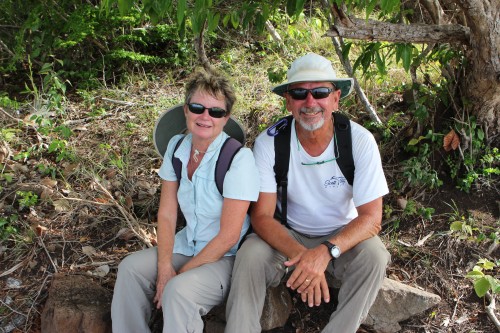 19th of May, off the ball at the Pitons in St. Lucia by 05h00.  Of course, the drizzle started just as we were bringing in the flopperstopper birds, and quit when we were ten minutes out. The lines went in the water at first light, and we trolled along with 20 knots of wind on the port beam in 2’-4’ seas.  I had rigged up a couple of frozen Ballyhoo, but they didn’t feel “right.”  The first time that I reeled them in to check for weeds, they were just a head and a hook, with a defleshed spine trailing (Musta thawed out somewhere along the way-oh well).  Threw out some lazy man’s bait (lures) and kept on truckin’.  With the luck that we’ve had fishing this year, I didn’t expect to catch anything anyway.  As we motored along, with the oil cooler overheating every forty minutes or so, the lures kept picking up clumps of Sargasso weed.  Reel in, clean lure, let out-repeat often.  At 09h57 we had a big clump of weed on one of the lines and the reel was slowly paying out.  As I was reeling in, and I could see the lure around 50’ behind the boat two big fins appeared just behind it.  Then, it was off to the races!!  That line started screaming off the reel.  I increased to full drag (I can barely pull line off the reel at this setting), and the line was going out so fast, that I swear the reel was smoking.  Three hundred yards (that’s three football fields, folks) later, he started coming back to the boat, and I was reeling as fast as I could. Then, he decided that perpendicular to our course was a good idea, and he “tailwalked” across the surface.  He was a huge Marlin!!  He snapped 80# Spectra line like it was kite twine, and the excitement was over.  He had my lucky lure and I didn’t even have a picture to show for it-only a tall tale about “the one that got away.”

As we passed the lee side of St. Vincent, we rued the fact that it was not a safe place for cruisers to hang out.  There were several nice little anchorages, and many potential snorkeling spots.  Geographically speaking, the island is gorgeous.  The reality is, that several cruisers have been attacked and brutally murdered here in the past decade.  Senseless ultraviolence.  As we neared Bequia (Beck-way), the rain came down in sheets, washing off lotsa salt.  We dropped the hook off Princess Margaret beach, and went in to Port Elizabeth to clear SVG (Saint Vincent, Grenadines) Customs.  From there, we proceeded to fall in love with Bequia.  Suzanne found Donnaka, the local hiking guide, online, and we met with him the next morning to map out a few hikes around the island.  Born in Ireland, but having spent most of his life working in the European equivalent of the Peace Corps, he has lived all over the world.  We decided on 3 hikes, one by ourselves, and two with Donnaka as our guide.  Over the next three days, we covered nearly twenty miles, most in the bush.  We visited most of the bays/beaches on the windward side of the island, and summited Mt. Peggy, the highest peak on Bequia.  Along the way, Donnaka gave us a running history lesson of the island and its people.  We learned that Bequia is still allowed to hunt whales, and that 2 families on the island still do.  The International Whaling Commission allows Bequians to harvest up to 4 whales per year, using only traditional methods.  That is, boats no longer than 7 meters, hand-thrown harpoons, meat is not allowed to be exported off the island, etc.  Some years, no whales are taken, this year-only one.  One of the families has announced that as of this year, they will no longer be involved in the hunt.  I’m guessin’ that it’s just a matter of time before there is no whale hunt on Bequia.  Between our hikes, we enjoyed the village and its people.  Model boatbuilding is a traditional craft here, so we hit several workshops, and were amazed at the fine craftsmanship.  Getting around on Bequia is a story unto itself.  Mass transit entepreneurs abound.  Careening up and down the just barely two lane streets, brightly-colored 8 passenger minivans blaring a Soca beat from their oversized sound systems get you formheretothere.  Just stand on the side of the road, wave your hand, hop aboard, and you’re in for an adventure.  One of our rides stood out from the rest.  First, let me lay out the scene:  the buses always have one driver plus what I would call a “shotgunner”, who rides at the sliding door, collecting fares, operating the door and managing the seating.  Well, this bus stops, the door opens, and the inside sure looks full to me.  No problem.  No one blinks an eye.  Suz and I wedge in, and we’re off.  But wait!  There’s more!  We stop THREE more times to pick people up.  Jump seats are dropped, then homemade cushions are placed in the cracks.  By the time that we departed the circus clown-car there were 20 souls on board.  Quite a pungent, ear-splitting experience.  Oh, I almost forgot.  The driver’s staying cool by drinking a beer, driving with the other hand.  (“Tell me again how your parents died?”)  It’s hard to paint an adequate picture.  Bequia is like what I would imagine the “old Caribbean” was like-unspoiled by tourism or development.  Happy people with a laid-back lifestyle.  We swam on deserted beaches, bought fresh local produce from a “Mom and Pop” stand, ordered Roti in an alleyway off Front Street, and enjoyed homemade fruit juices from a small shop, hidden away on a back street.  Could’ve stayed for a long time, but Mustique was calling, and the weather looked favorable for a stay in the marginal anchorage there, so on the 26th, we were off.