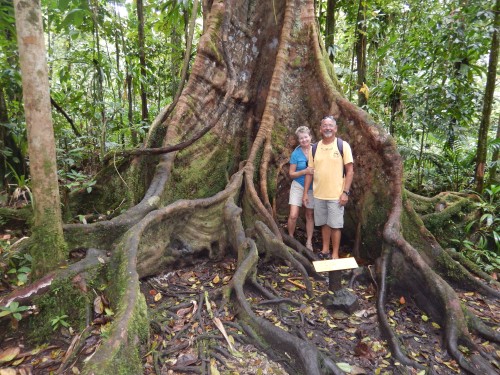 Even though the locals said that Little Bay was calm (for Little Bay), The 2 nights at Montserrat were pretty rolly.  We got the hook up, and were underway by 07h05.  After 7 and a half hours of 4’-6’ beam seas, we were happy to have the anchor down at Deshaies, Guadeloupe.  As we were heading to clear Customs, a guy on a sailboat is whistling and waving his arms at us.  We motor over, and he asks: “Are you really from Charlevoix?”  Yes, we are.  “I’m from Michigan, too”  One thing led to another, and we departed, promising to pick them up for church the following morning.  Typical of Customs in the French islands, check in was a breeze.  The computer terminal was in a tee shirt shop.  We checked in online, paid the guy at the counter five EC bucks, and we were outtathere.  Never took out our passports, boat papers-nada.  Sweet!

We picked Jim and Carol up the next morning.  The service was, of course, in French.  So…we only picked up snippets, and apparently missed a lot of good stuff.  The priest looked like Idi Amin, complete with the exophthalmos (bug eyes), and was quite a showman.  His gesticulations, expressions, and delivery were energetic, if not frantic.  Every two minutes, the congregation was laughing.  He also apparently missed the memo regarding Mass being one hour long.  An hour and forty-five minutes later, we stumbled out of the church, and down the stairs to the dinghy dock.  Aboard “Nepenthe,” Jim related that they were headed home after working their way up the Antilles from Surinam.  We asked them how long they’d been gone.  “Seventeen years.”  Must be a story there (yes, there was.)  Here’s the short version:  They had been friends for a number of years, both having (other) significant others.  After becoming single, they suddenly realized that they were dating, and went on like this for a year or so, before Jim became eligible for early retirement from General Motors.  When Carol (a nurse practioner) asked him what he was going to do next, he told her that he was going to buy a boat and sail in the islands.  Did she want to go?  She told Jim that she really didn’t.  When he asked her why, she replied that she really wanted to sail around the world.  When he told her that he really didn’t know how to do that, she replied: “It’s easy.  Go down to the islands and take a right.”  Seventeen years later, they have lots of stories to share, after circumnavigating the globe in a 42’ boat with no generator or freezer.

We all rented a car the next day, and toured Basse Terre, our half of the island.  (Guadeloupe is shaped like a butterfly.  One half is volcanic in origin, and quite mountainous.  The other half is coral, and very flat.  Once two separate islands, movement of tectonic plates forced them together, forming a single island).  We drove the Route de la Traverse, a road that climbs up through the cloud tropical forest from one coast to the other.  We got a short hike in at the top of the mountain through the forest during a break in the rain.  We crossed a raging river on a cable bridge, then walked for 45 minutes under the towering, dripping canopy-beautiful.  We stopped at a bakery and bought sandwiches, which we ate at a deserted black sand beach on the blustery South Sound, between the two halves of the island.  Viewing Soufriere, the volcano requires a pretty long hike, but we tried to get as far up the slope as possible by car.  In the process, we visited Bains Jaunes, where warm water bubbles out of the side of the mountain into a pool, a favorite for bathers.  We visited Montebello agricole rhum distillery, and got a private, behind-the-scenes tour.  The plant looked like a set from a Tim Burton movie, straight out of an alternate universe industrial age.  As we wandered past open conveyor belts feeding choppers and crushing apparatus, powered by steam engines with their mechanical governors spinning around, and open gears, I couldn’t help but think what the O.S.H.A. folks would think about this place.  The machinery, put into service in the early 1900’s, is so old that replacement parts need to be custom made.  In spite of its’ appearance, the distillery actually is very “green,” that is, it has a small carbon footprint.  The canes that have been squeezed dry for their juice are then burned to heat the boilers that power the machinery.  The ash that remains is sold to farmers to place on their fields as fertilizer.  On our way out, past the bottling station, where labels are applied to each bottle by hand, we passed a tank with what appeared to be a filling station hose running out of it.  When we asked, we were told that the locals come here to fill up their own bottles ($5/liter).  Personally, I prefer the molasses-based rums to the Rhum Agricole (which is made directly from cane juice).  I would describe the rhum Agricole as a “hotter” taste, as opposed to the sweeter rums made from molasses.  With stops at the Musee de Cacao, and an orchid garden, you could say that we had a full day.  The following morning, Suz and I took a taxi up to the botanical gardens.  Jim and Carol passed, as they had seen botanical gardens all around the world.  The gardens were a pleasant surprise.  They were quite extensive, well laid out, and nicely maintained.  We spent a good part of the day there, culminating with a late lunch, taken at the terraced hilltop restaurant, overlooking the gardens and the sea.

We cleared Customs the next morning, and stopped by Nepenthe to say goodbye to Jim and Carol.  They had guests onboard, some folks that they’d last seen in Borneo several years ago, and who happened to spot Nepenthe when they had sailed into the anchorage the night before.  Our proposed anchorage, 9 miles to the south, but still on Guadeloupe, was the bay near Pigeon Island, purportedly a good snorkeling spot.  We got the hook down on this rainy afternoon, and decided to just stay on the Girl and chill.  We snorkeled for an hour the next morning, and found the site to be above average, not exceptional.  By 09h15, we were on our way to Les Saintes, a group of French islands some 20 miles south of Guadeloupe.  There, we would meet up with John and Paulette aboard Seamantha.  As we cruised down the lee side of Guadeloupe, the sea and breeze were delightful-less than a foot, and less than 10 knots.  John and Paulette had left Deshais in the early hours of the morning, and told us that they were getting pounded.  Suzanne told them not to worry about dinner.  She’d have it ready for them when they arrived in les Saintes.  John replied that dinner would be greatly appreciated, as long as we preceded it with a “Don Q” (rum).  No problem there.  As we rounded the southern tip of Guadeloupe, the winds blasted us on the beam (18-22kn), and the waves built to 3’-5’.  #$%@!! The oil cooler overheated two times in the last 2 hours of the trip, necessitating forays into the 110 degree, rockin’ and rollin’ engine room to bleed the system.  Just before we passed the outer buoy leading into the anchorage at Les Saintes, the sky opened up-perfect timing as it washed off a great deal of the salt that we had accumulated in 2 hours of beam seas. We grabbed a mooring ball, put the flopperstoppers down, (it was surge-y), and awaited the arrival of Seamantha.  Two hours later, they arrived, and we were ready to begin our Les Saints adventure.